Strikes and protests rob Barcelona of its tourist appeal

Airport security are on strike, and locals are protesting against tourist overcrowding 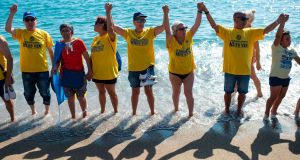 Residents of La Barceloneta neighbourhood protest against “drunken tourism” in their neighbourhood, in Barcelona on August 12, 2017. AFP Photo/Josep Lago

Police have been deployed at Barcelona El Prat airport to assist at security check points following a 24-hour strike by security staff.

Spain’s minister for infrastructure, Íñigo De la Serna, said he had no option but to send in the police because the strike action “not only affects passengers and the country’s image, as well as being a problem for Catalonia and Barcelona, but also security and public order”. Spain is on level four, the second highest terrorist security alert.

The staff employed by Eulen voted to have a 24-hour strike today in pursuit of a pay claim. The private security workers have been staging go-slows and rolling one-hour strikes since late July and on Sunday voted for a second time to reject the company’s offer, paving the way for 24-hour strike action.

The workers voted by 150 to 36 to reject the offer and to go ahead with the planned industrial action.

Security staff are required by law to ensure at least 90 per cent service during their strike, and the police officers will assist in full-body and luggage checks. Barcelona airport handled 44 million passengers last year and figures for this year are expected to be higher.

Elsewhere in Barcelona tours by Segway and electric scooters have been provisionally banned by the city council in the old city and on the seafront for the summer.

On Saturday Barcelona residents wearing yellow T-shirts saying “Barceloneta is not for sale,” in Catalan, held a protest on the beach. Banners in English read “we don’t want tourists in our buildings this is not a beach resort.” Graffiti messages have been appearing around the city for about the past three years.

It is one of a number of popular destinations in Europe that are suffering from an influx of visitors, partly due to fears about going to Egypt, Tunisia and Turkey. Open skies and low-cost aire fares have led to huge rises in passenger numbers in recent years.

Barcelona has become a victim of its own success, following a 25-year campaign of promotion. The city of 1.6 million had eight million residential visitors in 2016, and more than 20 million day trippers.

Strike action is expected to spread to airports in the north-west of Spain – A Coruna and Santiago de Compostela, a popular airport for pilgrims on the Camino de Santiago – from August 20th.

Without visitors, my home became an empty doll’s house
8