What happens on a non-stop 17-hour flight?

What do passengers eat? How many pilots fly the plane? How many teabags do they pack? A look at spending (almost) a day on a plane

The non-stop Qantas flight from Perth to London Heathrow has been described as a “game-changer” by some in the aviation industry. 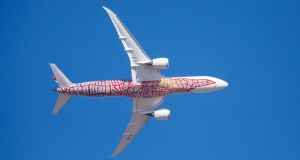 The long haul was made by a Boeing 787 Dreamliner called Emily, decorated with indigenous livery based on the artwork ‘Yam Dreaming’ by Emily Kame Kngwarreye. Photograph: Brent Winstone/EPA

Qantas Airways made a giant leap forward in long-haul travel with an inaugural non-stop flight between Australia and Britain in less than 24 hours over the weekend.

Flight QF9 took off on Saturday from Perth, in Western Australia, and landed in London early Sunday morning. Qantas’ chief executive, Alan Joyce, billed the trip as “historic” and “a game changer”.
Here’s everything you need to know about the trip:

View from the cockpit

The flight was operated by four pilots during the journey, with one or two pilots resting at any one time.

“This is absolutely the pinnacle of my career,” Norman told reporters. “No one has ever done this before. I’ve flown into Perth lots, and I’ve flown into London lots, but I’ve actually never joined the two dots together before.”

The passengers weigh in

Some passengers agreed to share data on their sleeping and activity patterns with researchers from the University of Sydney. They wore monitors that recorded data about their mental state, eating patterns and hydration levels.

According to the airline, the “homestyle comfort food” menus for trips between Perth and London were designed to maintain hydration, aid sleep and reduce jet lag, with meals including salad of cumin spiced beef with courgette, cheese ravioli, or chicken with red rice and roasted Mediterranean vegetables.

Among the first passengers to emerge was Robert Williamson, a mining executive from Perth who had travelled in business class. He told the Independent newspaper, “It was surprisingly good — above my expectation.”

But Peter Robinson, a builder from Liverpool, England, who lives in Perth and flew economy, was not so bowled over. He pronounced the food “ordinary”, though he said the flight was “good, quicker than I thought”.

The plane, the route

The long haul across oceans and continents was made by a Boeing 787 Dreamliner called Emily. The Dreamliner is twice as fuel-efficient as the Boeing 747, and Emily is decorated with indigenous livery based on the artwork Yam Dreaming by Emily Kame Kngwarreye, Qantas said.

To keep discomfort on such a long flight to a minimum – dry eyes and runny noses – the airline said the plane comes with features that improve air quality and lower cabin noise. Most aircraft have cabin air pressure equivalent to that of an altitude of 8,000ft, but for the Dreamliner, Boeing cut that down to 6,000ft — meaning it’s closer to conditions on the ground.

The aircraft travelled over the Indian Ocean, Sri Lanka, the southern tip of India, Oman, the United Arab Emirates, Iran, Turkey, Bulgaria, Romania, Austria, Germany, the Netherlands and Belgium. The Dreamliner crossed into England over Essex, then flew over North London and Berkshire before landing at Heathrow.

Previously, all flights between Australia and Britain had stopped at least once en route to refuel. But the 787 can travel from Perth to London with a full payload in one hop.

The airline said the inaugural flight reduced total travel time by cutting out stopovers and by taking advantage of favourable winds on any given day without having to factor in a midpoint in the Middle East or Asia when choosing a flight path.

Joyce said in a statement: “The original Kangaroo Route from Australia to London was named for the seven stops it made over four days back in 1947. Now we can do it in a single leap.”

The reaction on social media was mostly positive.

“We have a touchdown!!” wrote one Twitter user, Andrew Leong, who called it “a milestone in the aviation industry.”

How does the distance compare?

This is the third-longest commercial flight in operation and the world’s longest Dreamliner flight, the airline says.

Other carriers that have also flown non-stop journeys greater than 8,000 miles include Emirates and United Airlines.

Singapore Airlines claimed the world’s longest direct flight: more than 9,500 miles from Singapore to New York. But that direct route was discontinued in 2013, according to the BBC.

Strengthen your muscles without leaving the house
9