‘How we discovered the very best of Ireland’

The challenge was simple: beside the best food, Sally and John McKenna were on the hunt for the best walks, beaches, knife-makers, weavers and places to kayak too 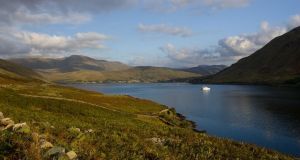 Almost 30 years ago, we idly mentioned to a friend that we had an idea about writing a book about Irish food.

“You write it and I’ll publish it,” he replied.

So we did, and he did, and The Irish Food Guide first appeared in late 1989. It was followed by a stream of annual and occasional guide books – collectively known as the Bridgestone Guides – about Irish food producers, restaurants and places to stay, which enjoyed one outstanding piece of good luck; all the time that we were writing about Irish food, it just kept getting better and better and more interesting. Year after year, Irish food proved itself to be a blossoming beauty with infinite potential.

Writing about it was nice work, and someone had to do it.

Then, on the last day of October 2017, we received an email from Jethro Lennox at HarperCollins in Glasgow: “I would like to discuss the possibility of doing an Ireland The Best book with yourselves.”

We thought about it long and hard, for fully three or four seconds, before replying: “We are most interested in your suggestion and would love to discuss it further.”

Some three months later, and Ireland The Best was finally being put to bed, all 424 pages and 2,000 entries of it.

The challenge of the new book was simple; it wasn’t just about good food and the people who produced it. Ireland The Best meant the best walks, beaches, golf courses, knife-makers, weavers and places to kayak. It wasn’t going to be enough to say that The Marker Hotel in Dublin is a smart but expensive destination; we had to discover that it also boasted the most complex cantilevered structure ever built in Ireland.

And for sure, Killary Harbour in Co Mayo is a beautiful spot to take a boat cruise.

But the story of Ireland’s only fjord gets much more interesting when you discover what happened to the papers of the great philosopher, Ludwig Wittgenstein, decades after he stayed in a house there.

We began our new research in Dingle, and, for the great Irish battlegrounds chapter, we researched the Siege of Smerwick, where 600 men were beheaded, and where a field is still known as Gort na gCeann (the Field of the Heads).

We crossed the Garfinny Bridge, the oldest surviving drystone bridge in Ireland, where the troops probably crossed before the massacre, and then, heading back into Dingle town. We visited Holden leatherworks, where Conor Holden makes beautiful leather treasures at his workshop on the water’s edge. Ancient history, and contemporary craftsmanship, cheek by jowl.

We were now looking to find great beaches, wild swimming places, walks, adventure pursuits and family places, as well as the best food and places to stay.

We were looking to get deep into the State, to uncover and discover its riches, and its secrets: how the Burren inspired JRR Tolkien to create Middle Earth for The Lord of the Rings. How The King’s Head bar in Galway is genuinely entitled to its name, because its original owner actually was the man who beheaded King Charles 1.

What we discovered was that travelling while researching Ireland’s history is one of the most pleasurable journeys one can make anywhere. In an age of experiential tourism, where everyone wants unique experiences, we found that the best way to make that happen was to telescope time.

It’s extraordinary, for instance, to walk into the elegant construction of the Gallarus Oratory, in Co Kerry, built in the 12 century, and find that it is still waterproof. The portcullis in Cahir Castle – said to be the most impregnable castle in Ireland – still works too. And you can visit the Belfast drawing office where the Titanic was conceived, and enjoy a cocktail in its vaulted splendour, now part of the Titanic Hotel.

Writing the book inspired us. Learning more about Irish history angered us, amused us, but above all it made us proud. We’ve always known explorers wore tweed to go to the South Pole, but we had never really considered its many qualities until we discovered Eddie Doherty’s Donegal Tweed, and Galway’s inspiring Tweed Project clothing company, headed up by restaurateur Aoibheann McNamara and Triona Lillis.

There’s an Aran sweater on display in the Museum of Modern Art in New York, and our research helped us unpick the meaning behind the stitches integrated into this iconic garment.

Looking closely at Irish craft and design led us to discoveries in wool, jewellery, basket-making, leatherwork, metalwork, porcelain and much more.

We began collecting longest, oldest, highest, widest stories, and we learned that the highest of Ireland’s round towers is in Kilmacduagh Monastery, near Gort, Co Galway, where its door hangs seven metre above ground (it also leans over half a metre).

We never worked out which was higher, the Powerscourt Waterfall in Wicklow, or the Mare’s Tail in Co Cork. But we believe the oldest bar in Ireland to be Sean’s Bar in Athlone, while the Brazen Head is the oldest in Dublin.

Along with the history, geology and sociology, comes the food. It’s startling, when you look upon the Kindred Spirits sculpture just outside Midleton, which commemorated the financial gift of the Choctaw Indians to the Irish people during the Famine, to think that the ancestors of the Curtin family who intermarried with the Choctaws are, today, running some of the best places to eat and drink in Co Clare: The Roadside Tavern, and the Burren Storehouse and Smokehouse, where they brew beer, smoke fish and cook mighty food.

Back in 1939, in a conversation between the poets FR Higgins and Louis MacNeice, Higgins suggested that Ireland was “a sort of dream that produces a sense of magic”.

We certainly got that sense of magic all during our explorations for Ireland The Best, whether it was on a midnight kayak trip in west Cork, or having a pitch-perfect brunch in Coleraine’s Lost & Found café after a New Year’s Day visit to the Dark Hedges.

Ireland the Best by John and Sally McKenna (HarperCollins) is published on March 20th. www.guides.ie