The Republic of Conch 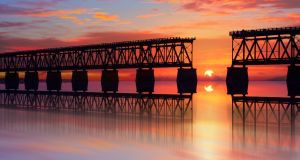 Sunset with broken bridge at Bahia Honda State Park in the Florida Keys, near Key West.

In April 1982, during the Nixon era, the US border patrol introduced a road block on the Florida Keys to screen traffic for drugs and refugees in front of the Last Chance Saloon just south of Florida city.

Residents of the Keys were infuriated and declared a unilateral declaration of independence (UDI) as the Conch Republic. They declared war on the United States and immediately surrendered with a claim for $1 billion in aid.

They fought hard against Washington to have the border control removed. Eventually it disappeared overnight. Their resilience stayed with them and now the Florida Keys is like an independent republic with residents referring to themselves as Conchs, a type of sea snail, and celebrate their National Day on April 23rd.

Their resilience, resoluteness and independent defiant streak has stood them well, and following Hurricane Irma in September which destroyed much of the Keys, collaborative working is allowing life to return to normal and redevelopment is well advanced.

There are few places in the United States, such as New Orleans and Las Vegas, that hum to their own tune, but the Keys is also one. Life in the Keys depends on fishing and tourism and the offers for tourists are extensive.

The Keys also attracts artists, writers, painters, counter culturists, alternative livers and has a strong eco awareness. Even the feral chickens are wild on Key West and you will often jump out of your skin when a cock screeches behind you. They arrived off boats over the years and stayed.

Many people live in trailers and on minimum incomes, though there is a very fine stock of mansions and art deco houses. Life is laid back in the Keys, walking around barefoot with a drink in the morning is normal.

The Stoned Crab restaurant is a good example of eco awareness. The restaurant has three fishing boats and “a three hands policy on sustainable fishing. The fisherman, the market and the chef are the only ones to touch your fish,” said chef and proprietor Paul Menta. Every day they serve fish fresh from the dock.

The Keys is a 124-mile series of outer islands linked by 42 bridges. The thin strip of land is bounded by the Gulf of Mexico and the Atlantic; conditions are ideal for all types of water-sports, and diving is a big activity. Paddle-boarding is a new sport which has taken off here and is an easy way to explore the coast. Dolphin watching and snorkelling are a must do on visits here.

The Keys has a stunning amount of wildlife. Pelicans ramble among tourists, flamingos stalk the shallow pools, and humming birds dive at visitors. Crocodiles, turtles and manatees populate the waters. In Marathon there is a hospital for injured turtles. Every year hundreds of turtles are injured by boats, straws and plastic bags.

The Coral Restoration Foundation, in Key Largo, a non-profit organisation, has discovered a way to grow coral and have a propagation programme. Small pieces of healthy coral are grown in laboratories until big enough to be planted back in the sea.

The coral is transplanted into underwater fields on iron frames to continue growing. In less than a year the coral is big enough to be transplanted back to the reef using epoxy resin. Visitors can join exploration trips to snorkel the coral fields.

Coral restoration programmes are beginning to happen around the world. Coral is the rainforest of the seas and 25 per cent of marine life is dependent on it.

Florida is famous for Key Lime Pie and in Kermit’s Bakery we learned how to make it. Six egg yolks, two small tins of condensed milk, four ounces of lime juice all whisked together and poured into a biscuit crumb-lined tin. Cover with meringue from the egg whites and bake at four/180 degrees for 20 minutes, delicious.

One of the most famous residents of Key West was Ernest Hemingway and his house with its 52 six-toed cats is a major attraction. You can imagine him in his study being inspired by Key West and joining the crowd at Mallory Square for a sundowner.

Every evening people gather at Mallory Square to see the sun set, it is an almost spiritual tradition in Key West and is very jolly with everyone talking to each other.

Treasure hunters will love the Mel Fisher Maritime Museum which traces his search for the Nuestra Senora de Atocha as well as explaining the importance of underwater archaeology. fla-keys.co.uk

Joan Scales was a guest of Aer Lingus, which flies direct to Miami from Dublin, and of the Florida Keys & Key West