The geographical anomaly that’s a land of wonder, character, contrasts and juxtapositions 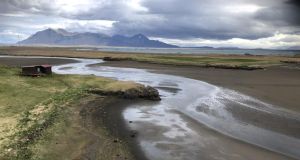 Iceland’s rocky coasts and mountains are condemned to a forever battle against a fury of wind, rain, snow, sea and ice.

After Ireland, Iceland is my favourite country in the whole world. The romance and magic of its endless skies and deserts, its pristine rivers, the white snow-blink of its icecaps and its black elemental lava-scapes have seduced me back time and time again.

Over decades, I’ve wandered its mountains and shores and had adventure after adventure. But its landscape is by no means the only attraction – its stories and writings, and its Irish connections too, have never failed to stir travellers’ imaginations.

There’s nothing rounded or gentle about Iceland, nothing lazy or meandering or old or accommodating about its wild rivers and immense waterfalls; its people have been seared and toughened by the fire of volcanic eruptions and the ice and winters of the Little Ice Age.

We took the long way back along the twisting, shore-hugging road around beautiful Hvalfjord, which reminded us of Killary fjord in Connemara

It shouldn’t really be there; geologically, it’s an unlikely upstart barely holding its own between the Arctic and the Atlantic and Greenland, its rocky coasts and mountains condemned to a forever battle against a fury of wind, rain, snow, sea and ice.

I’ve wanted for a long time to introduce my son Eoin to Iceland. And so we two went up there for three days last May, when there was already no real darkness, and stayed with old friends.

We could have taken the standard bus tours: the golden circle of Thingvellir, Geysir and Gullfoss one day, the next touring Reykjavik and maybe another in the Blue Lagoon; instead we hired a little Suzuki Jimny in Keflavik Airport and, over the three days, explored at our leisure the undoubted charms of the golden circle, wandered the fjord country north of the capital and even had a go at climbing the volcano of Hekla, meaning “hell” in Norse.

On day one, we did the golden circle. We hung out and walked all the lovely little trails around Thingvellir, the site of the gathering and law-making of the Icelandic clans for hundreds of years, and the dramatic location of the slow splitting of the American and European tectonic plates.

Under no pressure from tour guides and timetables, we took our time and wandered the wide space of Thingvellir and sat near its tumbling crystal clear rivers and wild lake shores, under the cleanest and clearest of sky and air.

Then it was on to Geysir and the drama and pop-appeal of super-heated water and steam, sometimes rising 30m into the air. We hung out there among the throngs of tourists, noting with amusement how each new batch, rushing up from their busses and edging impatiently too close, endured a good soaking as no-notice Strokkur played its games.

A short drive took us to what must be the most dramatic waterfall in Europe, Gullfoss; and despite the throngs of tourists, it worked its magic on us in that way only waterfalls do.

It was a real joy just to be present to the wild tumult and tumble of water, allowing the sights and sounds to evoke something deep and primal within us.

Day two dawned rainy and windy, but there is a saying in Iceland that “if you don’t like the weather, wait 10 minutes”. Our plan to hike the 800m of the local Croagh Patrick, the very popular Esja mountain just outside Reykjavik, went out the window in favour of drive around the fjord country north of the capital.

After visiting my friend Kristjon’s grave, we ventured up past Arkranes and Borgarnes; we explored little boreens down to wild shores, listened to the whirring of strange birds and watched the mountains to our south shred the cloud and rain, before coffee and lunch in Borgarnes in the fresh spring sunshine.

We took the long way back along the twisting, shore-hugging road around beautiful Hvalfjord, which reminded us of Killary fjord in Connemara.

Day three was our most dramatic. Ingibjorg, a great friend and widow of my friend Kristjon, advised that Hekla, which we had planned to climb that day, was due to erupt at any time. And sure enough, after our two-hour drive to its base, a dramatic sign there so warned us.

Undeterred, we set off from the track-head toward the mountain, the distant summit enshrouded in cloud. We walked for about six hours through a wild, mono-chrome and untracked wonderland, with its vast plains of tephra, volcanic “bombs” and fresh lava flows. It’s a raw place where ice, fire and rock have battled for thousands of years.

We ascended through dramatic outwash gashes, where flash floods from the volcano’s summit icecap had torn deeply into the mountainsides during ancient eruptions.

We crossed a 1980 lava field just to experience its underfoot conditions, so like a glacier crossing, and kicked up the finest dust as we went, the same dust that grounded most of Europe’s airlines in 2010.

Though there was never a hope we’d make the summit, we experienced, on that third day on the flanks of Iceland’s most active volcano, a landscape like nowhere else in Europe.

The going was easy and underfoot conditions were dusty but otherwise perfect for fast hiking. Navigation in the clear air was no problem. We loved it.

It poured rain as we drove to the airport in the early morning on our fourth day, past a moon-scape of bulging, fissured lava fields interspersed with holiday homes, apartment blocks and industrial installations. We flew home on Icelandair from a land of wonder, character, contrasts and juxtapositions.

Time to spare? Eight DIY jobs you can do today
2

Leaving Cert: ‘It feels aimless. I don’t know what the story is’
9

First person to see a human coronavirus was from Scotland
10