Killarney in the calm of off-season

Gap of Dunloe, a five-star hotel and stunning local sites nearly all to yourself 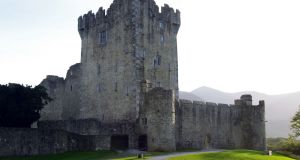 Muckross House: built by the Herbert family in the 1840s. The Herberts were related to Queen Victoria.

Think of Killarney, and you may conjure up postcard-perfect images of three lakes surrounded by woodlands and mountain peaks, of herds of red deer grazing in the national park’s pine green fields, and jarveys negotiating horse-drawn jaunting cars around windy roads through the Gap of Dunloe.

Or, if you’re like me, you’ll envisage coach-loads of tourists, bars and restaurants packed to the gills, traffic jams and queues everywhere, for everything.

Killarney holds the crown as the tourism capital of Ireland, and with such stunning natural surroundings, the reasons are obvious. But in some ways, it has also become a victim of its own success. A report published earlier this year found visitors were frustrated by heavy traffic, and warned that a projected growth in tourist numbers – from 1.1 million last year to a whopping 1.4 million in 2025 – would only put the town’s creaking infrastructure under even more strain.

It also lamented the impact of seasonality on tourism in Killarney, which sees bed capacity in the middle of winter fall to as low as 20 per cent in some hotels. If you’re looking for the quintessential Killarney experience of a boat tour around the lakes or a jaunting car through the Gap of Dunloe, you would be better off waiting until the weather improves (most boat and jarvey guides operate March-October only), but come in autumn, winter or early spring, and you could have the area’s many mountain trails, lakeside views and woodland walks all to yourself.

As the traditional starting point for the Ring of Kerry, in high season coaches clog the roads leading out of Killarney towards Kenmare. But in late November, when we take a guided drive with Paudie Murphy of Wild Atlantic Tours, we barely pass another vehicle.

First stop is Muckross House, built by the Herbert family in the 1840s. The Herberts were related to Queen Victoria through marriage, and spent more than a decade trying to coax her to visit them in Killarney. By the time she finally did in 1861, they had almost bankrupted themselves doing up the house and gardens. The house was sold twice before it and the surrounding lands were gifted to the State in 1924, forming the first national park in Ireland to which other estates – including Killarney House – were later donated. Tours guided by different characters take visitors around the 65 rooms, including the bedroom where Queen Victoria slept.

Recent heavy rainfall has made the nearby Torc Waterfall an even more spectacular sight, and just as our guide is telling us about its popularity as a spot to pop the big question, we almost interrupt a couple in a post-proposal embrace.

In high season, the jarveys would have your head for driving through the Gap of Dunloe in a car, but most don’t operate outside the town during winter, so Paudie takes us on a spectacular drive past Ladies View, from Moll’s Gap through the Black Valley to the Gap of Dunloe, before finishing at Ross Castle. Before retiring to our hotel for the evening, we take a dusky walk around the grounds of the recently reopened Killarney House, where manicured pathways criss-cross the lawns down to the Lower Lake.

If you’re going to splash out on a five-star hotel at any time of year, winter is undoubtedly the best, when darkness falls early and you’ve every excuse to stay indoors and make the most of the luxury facilities . It’s much cheaper too; the average price for a five-star hotel room in Killarney is just €114 in January, almost half what you can expect to pay in July or August. And you won’t be short of options in Killarney; the town has the highest concentration of five-star hotels in the country.

We stay in the Killarney Park Hotel in the centre of town, ranked the number 1 hotel in Ireland by Tripadvisor in 2018. While the hotel is full for six months of the year with Americans and Canadians, the accents around us in late November are mostly Irish. Concierge Padraig Casey, who grew up playing in the field where the hotel now stands, tells us many are repeat guests, who come back every year in the run-up to Christmas to soak up the festive atmosphere and put their feet up before the Christmas mayhem begins at home.

The Christmas in Killarney festival sees a weekly parade snaking through the town every Friday evening from late November until the end of December, with food and craft markets and carol singers in the town centre. The farm at Muckross House is transformed into Santa’s Kingdom, where kids can hitch a ride in carriages pulled by tinsel-adorned reindeer to meet the big man and his helper elves. The Killarney on Ice skating rink is a big annual hit with families, open until January 6th this year.

Ciara Kenny was a guest of the Killarney Park Hotel. Spring deals include two nights B&B with one dinner in the Park Restaurant for €255pps. See Killarneyparkhotel.ie