200 years of ‘Silent Night’ in Salzburg

To mark the carol’s 200th anniversary, the city is hosting magical Christmas festivities 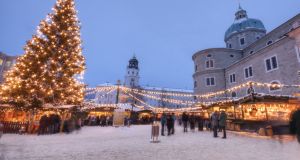 “All is calm, all is bright”, as the first flakes of snow fall on Salzburg’s spires and fairy-tale rooftops. This year, heralding Advent and the lead-up to Christmas Eve, Salzburgers celebrate the 200-year anniversary of the classic hymn Silent Night. It may be a song familiar to billions of people around the world but very few understand the origins of this Christmas carol and what it has come to represent.

To put the story in perspective, you must delve into 19th-century Salzburg, a city in turmoil both politically and economically. For more than 1,000 years prior to this, the region was autonomous and run by the Catholic-appointed Archbishop Prince, whose power was absolute. This reign ended in 1803 and Salzburg became part of Austria in 1816. This was also the year the harvest failed in many regions of the world caused by a colossal volcano in Indonesia – resulting in a prolonged winter across Europe. Against this backdrop of extreme hardship, a recently ordained priest in Salzburg by the name of Joseph Mohr wrote a poem entitled Silent Night, Holy Night to help people to appreciate and focus on what was important in life. However, it was not until 1818, when he met a local teacher, Franz Xaver Gruber, that the poem was first set to music.

Gruber and Mohr performed the hymn for the first time during midnight Mass on Christmas Eve in 1818 in the chapel in Oberndorf, outside Salzburg. Gruber’s simple melody was written to be performed by two vocals and guitar. Gruber sang bass and played guitar while Mohr sang tenor. This very same guitar can be viewed in the Silent Night Museum in Hallein, close to the spot where Gruber is buried. The song was gradually forgotten until 1852, when the organ-builder Carl Mauracher took the song back to his home in Tyrol.

In the years that followed, the song travelled around Europe, being played in courts as far away as Russia. Many believed the hymn was written by Michael Haydn and in 1854, the Royal Prussian Court Orchestra wrote to St Peter’s Abbey in Salzburg seeking confirmation and clarification. By pure coincidence, Gruber’s son was working in the abbey at the time and was able to confirm that it was in fact Gruber and not Haydn who had written it. Eventually, the composer wrote an extensive background to the song entitled Authentic Reasons for the Composition of the Christmas Song.

Over the two centuries since, Silent Night has been sung in more than 300 languages, including Javanese, Samoan and Zulu. To mark the anniversary, Salzburg has launched an extensive programme of events, all of which culminate in the singing of the hymn on Christmas Eve. A must-see is the specially commissioned musical play, Meine Stille Nacht (performed in German with English surtitles), which runs at the Horse Riding School theatre in the old town of Salzburg. The musical focuses on the debate between tradition and innovation, being set in the present day, and was the brainchild of Dr Carl Philip von Maldeghem, who is the artistic director of the Salzburg State Theatre.

Meine Stille Nacht – The Musical has been composed by John Debney, who composed the music for films such as Elf, I Know What You Did Last Summer and Spy Kids, to name a few. He was nominated for an Oscar for his Passion of the Christ score. Debney says: “If I’m doing my job well, I need to feel it,” and emotion is poured into the making of this special musical about love and the paring down to what is important in life. The lyricist Siedah Garrett has an equally impressive resume and has collaborated in the past with an A-list of musicians that includes, Barry White, Quincy Jones, Madonna, Al Jarreau and, most notably, Michael Jackson. She co-wrote Man in the Mirror with Jackson and was his duet partner on I Just Can’t Stop Loving You. The musical runs until February 3rd, 2019, with tickets available online from €18.

The Christmas market on Cathedral Square boasts its own 'Christmas market police', who ensure that market stalls sell only goods worthy of the city’s history and culture

It’s not just the sights and sounds of Christmas that make the Unesco World Heritage site of Salzburg’s old town magical but also the scent of cinnamon emanating from the stalls at the Kriskindle markets. Don’t be surprised to find Glu-beer at the Christmas markets, which, served hot, is a potent mixture similar to Glühwein and red in colour. A hot chocolate is best enjoyed with a dash of rum and all the usual delicious fare of the best markets.

The heritage and authenticity of the Christmas markets is important to the 150,000 people who live in Salzburg. The most famous Christmas market, which is held on Cathedral Square in the centre of the old town of Salzburg, dates back more than 500 years (1491) and is one of eight markets held in the city between November 22nd and December 26th each year. It boasts its own “Christmas market police”. Although not actual members of the police force, these individuals ensure that market stalls sell only goods worthy of the city’s history and culture. Consequently, you won’t find any cheap plastic trinkets imported from the far side of the world on sale there.

The Christmas markets originated as a way for mountain farmers and boat workers to generate extra income in the depths of winter when the frozen mountains and rivers made it difficult to make a living. The transportation of salt from the local mines was once a rich source of income for the state of Salzburgerland, with mountains also rich in silver and gold. Today, the snow-covered peaks are filled with tourists, who gather to enjoy the ski season in nearby resorts such as Bad Gastein, Zell am See and Bad Hofgastein. The “bad” meaning it is a spa town with public baths and springs from the earth, with many offering health and healing properties.

This year, it is possible to stay in Salzburg while enjoying the slopes, as free bus transfers are on offer for skiers who prefer to spend evenings in the culturally rich and beautiful state capital. It’s an initiative that may appeal to couples where one family member would rather soak up the Sound of Music rather than the piste.

The best way to get around the city is with the Salzburg Pass, which includes transport on the buses and trams. It also includes entry into some of the city’s many museums including The Silent Night Museum.

Salzburg has an intimacy, romance and serenity coupled with an indescribable feeling of culture and maturity. You just feel this city has been wealthy for a long time

Found in many of the chocolate shops and cafes on the cobble-stoned streets of the old town are Mozartkugeln chocolates – with a centre of pistachios and nougat surrounded in rich dark chocolate making a particularly tasty delicacy. The coffee house, Café Tomaselli, where Mozart and his wife used to hang out, is still a thriving business and close to the house where he was born.

Salzburg has an intimacy, romance and serenity coupled with an indescribable feeling of culture and maturity. You just feel this city has been wealthy for a long time and everything they do here, they do exceptionally well. Unlike most other cities in Europe, you’ll be hard-pressed to find any major European or international retailer, even in the most prestigious shopping areas. Each shop is steeped in its own unique history and celebrates the local produce, whether it is food, beer, textiles, wooden toys or mouth-watering confectionery and chocolates. All products appear to be authentic to the region.

If you fancy retracing the steps and locations of The Sound of Music, visiting Mozart’s birthplace, indulging in local culinary specialities or admiring the staggering Baroque architecture in one of the many stunning squares, Salzburg is a unique destination and, like a puppy, is “Not just for Christmas”.