Walk for the Weekend: A lost way of life on Gola Island, Donegal

Súilóid Oileán Ghabhla is a short walk of 3.5km on the island’s old tracks that boasts wonderful views 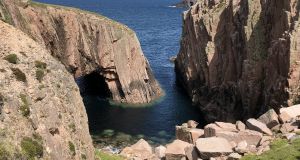 Súilóid Oileán Gabhla, Gola Island, Co Donegal: the island itself was beautiful, even though the ruined cottages and derelict buildings told a sadder story of “a lost way of life”

“Báidín Fheilimidh d’imigh go Gabhla . . .” would ring in my ears as Captain “Sabba” Cullen in The Cricket took us over the short sunny strait to this beautiful little island. It was late July, and the last month’s balmy heatwave airs were giving way to the less playful vagaries of a “mobile Atlantic flow”, as Met Éireann had put it. We were lucky though – a weak cold front had gifted us a day-long sky of the Atlantic blue, and allowed a strong summer sun to sparkle the sea and surf and warm the spirits of us first-time visitors.

We were there to walk the “Gola Island Way” (or “Súilóid Oileán Ghabhla”), a short walk of 3.5km on the island’s old rough tracks. We would walk from the pier at the east-side settlement down to the lovely little south-shore harbour at Port a Chruinn, and on up to the wild northwest coast and the dramatic Scoilt Uí Dhúgáin. For us, all along the way (leaving aside an unsightly trackside dump), we were enthralled by wonderful inland views of Errigal and of a west Donegal shoreline graced by easily the best and most varied set of beaches in Ireland.

The island itself was beautiful, even though the ruined cottages and derelict buildings told a sadder story of a "lost way of life”, as one of the many informative panels along the way told us; and our enjoyment of its sun-warmed pink granite outcrops and its fields of bog cotton dancing in the gentle south-westerly breeze was a bit tempered by these hard realities of life and livelihood in days gone by.

We were told that the beautiful Tráigh Mhachaire na nGall, facing due west into the Atlantic, sported a sole naturist during the hot spell. And what better spot? This sandy beach is well worth a brief detour across cropped machair, past lovely Loch Mhachaire na nGall and a storm-deposited arc of rounded pink granite stones. Away out in the open Atlantic, beyond the little bay’s embrace of granite cliffs and great rock climbing pillars, we could just about spot Tadhg, Brian and Una; these three pagan siblings were swimming to pious Aran Island from pagan Tory, intent no doubt on mischief and mayhem, but didn’t reckon on the special powers of St Columcille, who turned them unceremoniously to sea stacks.

Besides that beautiful beach, two other places worth a hangout are An Teach Beag near Port a Chruinn for refreshments and a chat, and the sheep-cropped grassy slopes around the wild wonder of Scoilt Uí Dhúgáin. We stayed an hour there just quietly taking in the views of Bloody Foreland and Tory, the dramatic sea arch and its wheeling seagulls, and the lovely colour contrasts of green-clad islands, pink granite, white surf and the blues of sea and sky.

Gola is probably the most accessible of the Donegal islands, a short and sheltered journey to a sadly lost, but nevertheless beautiful, world. It’s well worth a visit.

Map: Panel at pier on the island

Start/Finish: Landing spot on the island