The best places to see wildlife this Christmas 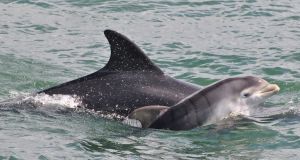 For your best chance of a dolphin sighting, head to the mouth of the Shannon estuary, along the Wild Atlantic Way at the Loop Head peninsula. Photograph: Isabel Baker/Shannon Dolphin and Wildlife Foundation

By the second day of Christmas, chances are you’ll already need to get out of the house. If observing the crazy consumer in its natural habitat, the January sales, doesn’t do it for you, you’ll be looking for a walk on the wild side. The good news is there are plenty of places to go to see real wildlife over Christmas.

For Dubs, make a St Stephen’s Day pilgrimage to the Phoenix Park. Forget the zoo – they’re not wild and it’s not open – but the park itself is open seven days a week, year round. Originally a royal hunting park, created in the 1660s and opened to the public in 1747, a legacy of this is of course its herd of fallow deer, descendents of the ones that got away.

If you’re in the northwest, Glenveagh National Park in Co Donegal is the place to see a herd of red deer. Yes, technically, here too the animals are enclosed but within enough space to still run wild. The national park is open to walkers year round, including Christmas week, though the visitor centre is closed until 2nd January.

Wild goats are usually to be found in remote, mountainous areas such as in Killarney, Glendalough and the Burren. But if you keep your eyes peeled you’ll see them in semi-suburbia at the Scalp too, a rocky, glacial formation between Kilternan and Enniskerry in Co Wicklow.

Take the Scalp trail, a short (2km) looped walk, with a steep climb from one side, or via Coillte’s Barnaslingan Wood on the other, and you’re likely to see one perched on a rock.

Alternatively, get out on any coastal path and keep your eyes peeled – or, better still, your binoculars polished – for marine wildlife.

In 1991, Ireland declared its entire waters a whale and dolphin sanctuary, the first European sanctuary within the fishery limits of an entire country. At the time, people laughed. No one’s laughing now, unfortunately.

For your best chance of a sighting, head to the mouth of the Shannon estuary, along the Wild Atlantic Way at the Loop Head peninsula. It’s a designated Special Area of Conservation and a proposed Natural Heritage Area, famous for a school of bottlenose dolphins.

The waters off west Cork offer some of the best opportunities for whale watching off the Irish coast and don’t forget sharks. There’s a massive nursery 200 miles off the west coast

That said, it’s not beyond the bounds of possibility to see the sales and a cetacean on the same day, given that a dolphin was seen swimming up the Liffey last month.

The waters off west Cork are reckoned to offer some of the best opportunities for whale watching off the Irish coast and don’t forget sharks. We now know there’s a massive shark nursery, found over the summer 200 miles off the west coast, thanks to the Marine Institute’s SeaRover programme.

Wherever you go around the coast there are plenty of opportunities to see seals, many of which, like that in the harbour at Kinsale, are called Sammy.

To see whole colonies – from a distance, please – head to the north end of Bull Island in Dublin or Glengarriff harbour in Co Cork. Or take a bracing walk along the Murrough at Wicklow town and finish up at the harbour to see its resident seal, also Sammy, queuing patiently outside the fish shop. How wild is that?

For hares, of course, the best view you’ll get is out the window of a 737 at Dublin airport, preferably en route to some winter sun.

Dublin’s Bull Island is an internationally recognised biosphere habitat. That puts it on a par with Yellowstone and the Serengeti

Other than that, what with other creatures; hibernation and pesky nocturnal habits, by far your best bet for wildlife spotting this Christmas is to look up.

Just as golf is a good walk spoiled, even the most fleeting interest in birds makes a great walk better. It’s also way more rewarding than going out looking for any other form of wildlife.

“Wildlife is great, but when was the last time you saw a badger, or an otter, or even a fox?” says Eric Dempsey of Birds Ireland and co-author, with illustrator Michael O’Clery, of The Complete Field Guide to Ireland’s Birds.

“There aren’t any butterflies or insects around at this time of year either but it’s absolutely the best time to go birdwatching,” says Dempsey.

“The country is chock-a-block right now. Our temperate climate means we don’t freeze over, and we have coastlands, lakes, wetlands and soft fields. The result is that thousands of birds arrive here for the winter.”

If you’re heading out walking and want to see some, head for an estuary, he suggests. “They are full of food. They’re like a broth at low tide.”

Dublin’s Bull Island is one of his favourite haunts, unsurprisingly given that it is one of the best places on the planet for birdwatching. “It’s an internationally recognised biosphere habitat – that puts it on a par with the likes of Yellowstone and the Serengeti but people just don’t realise it,” says Dempsey.

There is no other capital city in the world that has, within the city limits, genuinely wild brent geese flying around. It's just the best

“I bring groups of American tourists out to Bull Island regularly and they are just agog at the sheer number of species it holds during winter. There is no other capital city in the world that has, within the city limits, genuinely wild brent geese flying around. On Bull Island you’ll see all sorts of birds from Arctic Canada, Greenland, northern Europe and Siberia, all feeding side by side. It’s just the best.”

Lakes are good places to go too, to see diving ducks, he suggests, while the grasslands of the midlands are perfect for redwings and fieldfares in from Iceland, Scandinavia and even Siberia.

“For shore birds I love Ballycotton, for diving birds Ballyvaughan is great, and the Wexford wild fowl reserve has half the world’s population of Greenland white-fronted geese, around 10,000 or so,” says Dempsey.

Niall Hatch of BirdWatch Ireland suggests Rogerstown nature reserve near Donabate as a great place to walk. “It’s great for overwintering birds and for owls. Go just before dusk and you’ll often see barn owls and long-eared owls, and during the day short-eared owls, in the car park and in the field beside it. The reserve overlooks the estuary and mudflats and there are observatory hides too.”

Take a walk through the East Coast Nature Reserve in Newcastle and spot wintering ducks such as shoveller, wigeon and teal. “The duck people are most familiar with from parks is the mallard, but in winter we get an influx of these other ducks from the Arctic, Iceland, Scandinavia and Siberia,” says Hatch.

Wing it to Avoca in Co Wicklow to see red kites patrolling the skies; Lissadell in Co Sligo for Ireland’s largest population of barnacle geese; or Mullaghmore for whooper swans

His personal favourite is Tacumshin Lake in Co Wexford. “It’s just inland from Carnsore Point and is really only known to birdwatchers but it’s just fantastic. It gets huge numbers of swans, ducks and geese as well as many wading birds such as redshanks and dunlin, plus godwits and curlews. In the evenings groups of hen harriers come in to roost. A new colony of bearded tit, an absolute beauty of a bird, has grown up there too in the last few years, which is terrific.”

If it’s birds of prey you’re after, wing it to Avoca in Co Wicklow to see the red kites patrolling the skies. The best view of them is to be had from the bench outside the Avoca Cafe. Call it Birdwatching 101.

Or head to Lissadell in Co Sligo, home to Ireland’s largest population of barnacle geese, from Greenland, or Mullaghmore for whooper swans. In the midlands, get out on to the Lough Boora Parklands, suggests Hatch. It’s the last place in Ireland to see the grey partridge, a bird long associated with Christmas – which might explain why – as well as snipe and lapwing.

What’s really fascinating about the birds around right now is the lengths to which they’ve gone to get here. “These migratory birds connect us to the rest of the planet,” says Hatch. “Of course they’re not large and spectacular like lions and elephants but they are every bit as interesting and Ireland is at the crossroads of so many of these great migratory journeys.”

Sofa so good: A guide to sitting comfortably
3