Svalbard - an Arctic haven of polar bears and Northern Lights

Experience a polar night within easy reach of Dublin, via Oslo, on Norwegian Air 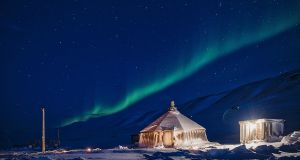 I’m just back from a place that doesn’t appear on most globes, as it’s obliterated by the bolt connecting the turning mechanism to the stand.

It’s at a latitude that would be impossible to reach elsewhere on earth without hiring private planes or ice-breakers, yet somehow this Arctic archipelago is within easy reach of Dublin, via Oslo, on Norwegian Air. It’s called Svalbard and I’d wager that it is like no other place you have ever experienced.

It is a land that is, in fact, 60 per cent glacier, 23 per cent barren stone and the rest a meagre covering of frail grasses and three types of flowers. Humans have managed to live here only for the last century, but as Irish citizens, (and signatories of the 1923 Treaty of Svalbard), we are entitled to head north and begin new lives there tomorrow if we fancy re-imagining ourselves as arctic trappers: hunting seals on the pack ice, setting traps for arctic foxes, surviving on the meat of ptarmigan and reindeer.

In winter its power arises from the ghostly aura of the landscape that reveals itself in smudged contours of dark browns, blacks and blurry aubergine

The treaty was part of the Versailles Agreement of 1920 and it acknowledges that, while Norway holds sovereignty over this collection of islands just south of the North Pole, citizens of the signatory nations have a right to live and work there if we wish. As of 2018 2,240 people from 52 different countries have accepted the challenge; most work in tourism or scientific research, but there are still a few trappers left.

Before deciding to join them, it would be worth trying a holiday first, to see what a world without trees feels like, apart from a few stunted birch and willow that grow no taller than grass, and without birds in winter, apart from the ptarmigan, but with more than 3,000 polar bears and 4,000 snow mobiles.

Now is the perfect season to visit, as, for the next 10 weeks Svalbard descends into 24-hour darkness. The constant darkness offers the chance to revel in the wonders of the Northern Lights at any time, day or night. As the snow smothers the land this sub-polar realm, which has no roads going anywhere beyond the paltry stretches within each of the three tiny towns, suddenly becomes accessible by snowmobile, snowcat trucks and dog sled. Now is the time to get out and enjoy a landscape that in summer is only explorable by hiking or kayaking and cruising around its edges.

As your plane flies in over the fjord to the main town of Svalbard, Longyearbyen, what you see through the murky dusk is a blurry whiteness – a sterile magnificence of snow, ice, cloud and water on a grey-black base of heavily eroded sedimentary mountains that once formed the base of an ocean when Svalbard was at the equator. In summertime it is the clear luminosity and subtle alterations of the iridescent arctic light that give the place its potency and magnetic allure, but in winter its power arises from the ghostly aura of the landscape that reveals itself in smudged contours of dark browns, blacks and blurry aubergine. Though the tones are muted, your colour receptors adapt as they do during a solar eclipse and you find the gradations are infinite. Almost everyone in Svalbard prefers this quiet muted hush of the polar night to the bewildering brightness of constant summer light.

Even on the short tarmac stretch along the fjord from the airport you may encounter reindeer – an endemic stunted species with shorter legs and a thicker pelt to contend with the harshness of the environment. At this time of year there isn’t even the few grasses or purple and yellow saxifrage to graze upon and they must survive on whatever mosses and lichens they unearth beneath the snow.

Also, on the route in from the airport you’ll pass the Svalbard Global Seed Vault – an artificial cavern deep beneath the permafrost that is currently a repository for 968,000 seed types, ranging from African and Asian varieties of maize, rice and sorghum to Irish hunter barley and potatoes from South America. It’s a good example of how Svalbard is a resource for all humankind, that is merely overseen and maintained by Norway; a place of global cooperation, in which eight different nations now have year-round research stations.

Though visits inside the seed vault aren’t possible, the sheer effort that is being spent here to safeguard our genetic diversity is so at odds with the move by the agro-industry to limit farming to a few copyrightable genetically modified seed varieties. Last year, the increasing pace of climate change threatened the vault as the permafrost began to melt, and Norway is currently spending a further €10 million to safeguard the precious genetic bio-heritage stored within it.

You’ll drop your bags in one of the few hotels in Longyearbyen, which are all built on wooden poles driven into the permafrost, like oversized timber cabins. The most basic and affordable rooms are in renovated timber-clad dormitories from the coal mining days, called the Coal Miners Cabins, while the most elegant are at Funken Lodge, which was once the home of the mine owners. In between these is the Radisson Blu Polar Hotel. All are owned by Hurtigruten Svalbard, a division of the Norwegian cruise company that still operates postal boat service along the northern Norway coast.

Once settled in, you wrap yourself in thermals and head out on foot to try to contend with the sheer soaring outcrops of rocky hillside that arise on all sides, looking like badly gouged craniums emerging from pools of liquid iron. This walk will be invariably short as the freezing arctic gusts and the dry tundra air will have your lips puckering, nose burning and eyes watering until you grow accustomed to it. It will also be short because within 15 minutes of walking in any direction you come across polar bear warning signs that daren’t be passed without a gun or at least flares as protection from polar bears. The likelihood of seeing bears in town is very low, but yet this September three polar bears spent almost a week around the outskirts when lured in by the scent of a decaying whale carcass washed ashore.

In truth, the minimal light and snow-clad surroundings make the likelihood of spotting polar bears in winter highly unlikely; that’s what the 24-hour days of summer are for. Now is the time for the Northern Lights, and to see them at their best you need to get out a distance from Longyearbyen. Book a dog-sledding trip, a snowmobile or snowcat tour, or a cycle on electric fat-tyred bikes that give phenomenal grip on icy tracks, and then hope the skies are clear and the conditions are right for a spectacular light extravaganza.

For a more sedate experience, take a bus out on the road towards the last remaining active coal mine that provides fuel for the town’s power station. Just before the road ends you’ll find Camp Barentz, a replica of the log cabin that was built by the Dutch explorer, Willem Barentsz, who first discovered Svalbard by accident in 1596. When his ship was trapped in the ice his crew were forced to build a cabin from driftwood to overwinter there.

Almost 300 years later his site was rediscovered under the ice. So they have been able to make this replica cabin – lined by large settle beds clad in seal skins and reindeer hides and with a roaring driftwood log fire in the centre. Most nights a traditional Sami reindeer stew is served and you settle down with glasses of warming aquavit to wait for the boiling particles that are fired out from the sun to reach the earth’s upper atmosphere. There they set in motion the chain of chemical and magnetic reactions that unleash glorious swathes of light across the sky.

I’ve seen the Northern Lights numerous times, and yet in a place like Svalbard, with constant 24-hour darkness, the impact of suddenly witnessing these swirls and flurries of celestial pyrotechnics is nothing short of sacred. The curtains of dancing red and green lights soaring overhead bring tears to my eyes every time, perhaps sparked by the sheet beauty of our world.

And yet it is the frailty of this beauty that will most impact you in Svalbard, where you clearly see the rate at which the arctic ice is retreating. Looking out at the lapping waters of a fjord that had always frozen solid in winter while coal mining continues just up the road makes you question our ability to act collectively for our own good. Yet it was the nations of Europe combining to form the Treaty of Svalbard a century ago that preserved this wilderness from further exploitation and military development. And it is all of us who have maintained it as a haven of biodiversity and ecological research for the world under the stewardship of Norway. Visit it while you still can.