Walk for the Weekend: A tantalising taste of Aran Island 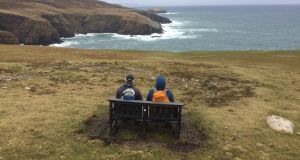 We had planned to return on the 3.30pm ferry, giving us nearly five hours to explore this intriguing place. 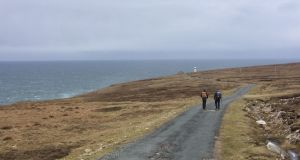 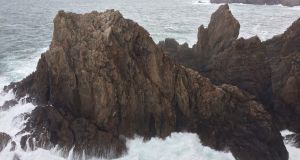 Rutland Sound was deep and still under a hazy sun this early March morning. We were gliding past the smoothened granite sides of this narrow channel out of Burtonport, and admiring the well built houses on the Rutland Island shore, each with its own tiny access quay. But it was the larger island, Aran Island, and its extensive way-marked Slí Arainn Mhóir, that was our objective this day. We had planned to return on the 3.30pm ferry, giving us nearly five hours to explore this intriguing place.

We picked up a very informative free map – and some food for a picnic lunch - in Teach Phil Ban shop just south of the island’s harbour and set off anti-clockwise on the island loop. A quick look at the map’s estimate for the full loop (14kms and four/five hours) had us reluctantly settle for the northern section – today would have to be just a “taster”!

Our start was a 70mts winding climb up out of Leabgarrow, but our effort was rewarded by great views of the mainland to our right and low Cruit and high Owey islands away off to the north. And in the distant open Atlantic were the surf-girdled Tadhg, Brian and Una, three pagan siblings turned to stone sea-stacks by St Colmcille as they attempted to swim from Tory to Aran! They’d nearly made it, and would be released apparently to try to complete their voyage every seven years! This was to be the first of a multitude of intriguing stories, myths, happenings and facts on this fascinating loop.

After a kilometre or so, the Slí turned abruptly left, and soon commenced a long gradual climb of about 110mts. We were now on a broad plateau, windswept and featureless except for old thin turf cuttings. Soon though, we entered the world of the west coast of the island with its cliffs and sheep-cropped heath and wind and Atlantic views and an ever angry sea. The lighthouse at Rinrawros Point was our highlight – a wild elemental place of sky and deep rocky bays full of churning sea-foam, and a stout wall to shelter our picnic! Our views to the south vanished over lunch, and a watery sky had us scurrying back to Cowan’s Lake and the Beaver Island Monument – a spot well worth stopping at and remembering the many island residents who swopped the Atlantic for the waters of Lake Michigan after the Great Famine.

Then it was back across the island, and out of the rain, back into the comfort of very friendly Teach Phil Bán pub. A turf fire, coffee and pints preceded a sunlit ferry journey back, an accompanying pair of racing dolphins adding to the spectacle!

It had been a tantalising “taster” of what this storied and beautiful island has to offer. We’d be back, maybe for two days, and maybe with bikes, for some further more relaxed and mindful exploration!

Map OSI Discovery sheet 1 (or maps available on island)
Getting there Regular ferries from Burtonport, Co Donegal
Effort 9km (including lighthouse spur), with 260m of climbing, over about three hours
Suitability Fairly easy, over tracks and paved roads