Between signing forms and taking non-smiling baby photos it’s quite the production. And that’s before you try to find a respected member of the community 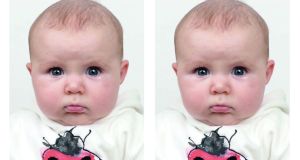 Say cheese! No, don’t: Ruby Harris Pope follows the rules for a baby’s passport photograph: No sleeping, smiling or sobbing. And definitely no drooling.

“Oh you’ve left it awful late,” strangers in the park say when I tell them I’m getting ready to apply for my four-month-old girl’s first passport ahead of her first holiday in June.

Three months seems like loads of time to me but their concern is a worry so I immediately race into a Garda station for a passport application form. It looks simple enough but I somehow manage to get my phone number and my little girl’s middle name wrong on the first attempt so have to race back to the guards for another form.

Once it’s completed, I turn my mind to passport photographs. The form makes the rules very clear. The subject has to be sitting or standing upright and staring directly at the camera. They must have their eyes wide open. They cannot be sleeping, smiling or sobbing. And they are not allowed to drool.

I explain the rules to my four-month-old. She laughs.

“No laughing,” I say sternly. Her bottom lip trembles.

We go into a specialist picture place on Dublin’s Abbey St and, while she looks suspiciously at the strange man pointing the strange box at her face, she holds it together long enough for the perfect photograph to be taken.

Next, I have to find a respected member of the community to stand over the fact that we, as her parents, are who we say we were and she is who we say she is. This is, obviously, important and essential in safeguarding all children. It also nearly breaks me.

The list of respected members of the community is short and, to be honest, could do with a bit of a refresh.

While some priests, politicians and bankers may have shattered lives, scandalised the country, wrecked our economy and saddled us with billions of euro of debt that my children’s children’s children will still be paying off, in passport circles they remain sufficiently upstanding to validate my little girl’s existence.

Not knowing any priests, politicians or bankers, I arrange for a GP to sign the form. Not longer than 90 seconds after I arrive in the doctor’s surgery, I’m storming out in high dudgeon.

All I wanted was a signature. I wasn’t looking for a sneaky consultation or a sick note. Not a single word needed to be exchanged and absolutely none of the many admirable skills doctors spend so long acquiring are needed.

It could have been done in less than a minute which is why I think the €15 charge the practice demands is wildly excessive.

But instead of simply sighing melodramatically as I hand over the cash – which is what a normal person would do – I go for a big song-and-dance routine instead. Much to the mortification of my partner and the bemusement of my four-month-old I insist we leave.

The red mist clears and – now even more panicked than I was – I start looking for an alternative autograph. Across the road from the surgery is a solicitor’s office. I check the form and see that they too are deemed upstanding.

I go in and ask if someone can help me out. They can. Me and the solicitor chat amicably about the weather and the world as she fills out her section of the form before signing it with a flourish and then stamping it. It takes less than two minutes and there is no charge.

I am delighted with myself.

Truth be told, I am bordering on insufferable smugness as I bring the newly signed and stamped form to a local Garda station where I join a queue.

There are only two other people in it so it can’t be long, I tell myself.

I wait for a garda to deal with a complicated query from a woman whose car has been impounded and is now in Donabate. Then the guard looks after a man with no English who is relying on the translation software on his phone to get his messages across.

The results are mixed.

He says something in Russian to his phone, which translates it as “I have no personality”.

We all look confused.

A long, long time passes before the phone clarifies that he does actually have a personality but he does not have ID. And he needs a form signed by the gardaí so his Social Welfare application can be processed.

Slowly, eventually my turn comes. I clear the steam from my ears as the Garda stamps and signs the pictures and fills in all the appropriate boxes.

“What,” I say nervously.

“The solicitor has signed the form with a blue biro. It is supposed to be black ink. I don’t think they will accept this.”

I’m about to pass out with the stress of it all when my Gardaí angel rescues me.

“Don’t worry, I’ll be your witness,” she says. “Just fill in another form and I’ll sign it.”

Clutching it to my chest, I race to a nearby post office so I can send it via Passport Express. Because with only three months to go I can’t be taking any chances and am happy to pay extra. The post office is closed for lunch.

I pace the pavement outside in the driving rain for 20 minutes, turning my back just long enough to allow a massive queue to form ahead of me.

I find myself standing just behind a man who is loudly telling his friend that while he has strong feelings on the upcoming referendum he is not going to vote as he believes it is “an issue for the women”.

I am about to give him a lesson in civic responsibility and the workings of democracy when he is called to a counter.

Then I am called to a counter.

Lathered is sweat and rain, I hand over €40 for a three-year passport and return to my office where I sit and seethe gently until – with splendid synchronicity – a colleague breezes past, waving a piece of paper in his hand.

“How times change,” he says. “I’ve just been able to apply for my passport online. Remember when you had to jump through all sorts of hoops and get all sorts of forms signed and pictures stamped?”

It is a miracle he escapes unscathed.

Getting a child’s passport