An insider’s guide to Gran Canaria

Most tourists head south, but a trip to Las Palmas, in the northeast, offers lots to do 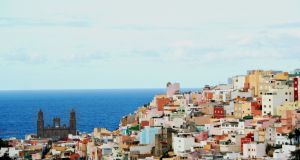 While the south of Gran Canaria may be more popular with tourists, Las Palmas has a lot to offer. Photograph: Getty Images

We’re sitting atop a hill outside Las Coloradas, a little village on Gran Canaria’s most north-easterly point, with a birds-eye view of the sunset spilling over the capital city. From this height, Las Palmas looks spectacular.

This northern city has a beautiful promenade on its western side looking onto the north Atlantic. While the south of the island may be more popular with tourists (in towns such as Maspalomas), Las Palmas has a lot to offer.

Conor Dowling (24), from Wicklow, moved here in early 2017. An avid surfer, he currently works in an adventure camp. He has seen Las Palmas becoming more popular with visitors and though the weather in the south may be better, he says people now have more of an interest in seeing the country, rather than just a resort. And while the promenade has fabulous views of the ocean, there’s more to Gran Canaria than cheap food and drink and a bit of sun. We take a whirlwind tour.

Walking the promenade, Las Coloradas is about 25 minutes’ away from Las Palmas. The walkway leads to El Confital beach which, though rocky, is good for swimming. It’s an easy walk with spectacular viewpoints as you pass houses built into the hills.

Uphill from El Confital is that mesmerising viewpoint. From here, you can see across Las Palmas right out to Montana de Galdar (Galdar mountain) on the north-westerly tip of the island and, on a clear day, Teide in Tenerife.

Walking past the village brings more excellent views, though you can’t go too far before meeting signs and fencing erected by the nearby military base (we did see locals walking further).

For Dowling, Las Coloradas is “really relaxed and welcoming. You go to the bar and everyone says hello. It’s not like in the city where they’re trying to make you spend money. They’re just happy to have someone else in the bar.”

If a vibrant nightlife interests you, Triana, a street in the old town of the city, offers an interesting experience every Thursday night. The whole street fills with people and bars are open until about 12:30am/1am. Chairs and tables are available but they fill up quickly. The atmosphere is lively, and drinks and tapas are inexpensive.

Dowling describes it as more of a social event than a party, and though it may cater to a younger audience, it still attracts all ages.

For more nightlife, head to Plaza de la Música. People fill the bars and plaza while others sell cheap cans of beer, and it becomes one big party. The busiest night is Saturday, but the Saturday we visit only two of the bars are open – it’s still early in the season. While it may not be as busy, it’s still a popular night for locals, with a friendly atmosphere.

For a quiet retreat away from the busier pace of Las Palmas, San Cristobal is a small fishing village south-east of the city. A bus ride takes about half an hour from the main station in Santa Catalina, but if walking interests you, there is a beautiful walkway stretching from the station all the way to San Cristobal (more than 7km) and further.

The village has a couple of bars and restaurants on the ocean, and though the village itself doesn’t offer much, the scenery is worth the visit. The beaches are predominately rocky and the sounds of the ocean crashing onto them are often deafening.

The promenade in Las Palmas offers countless bars and restaurants, but Dowling advises staying off the main drag and heading nearby to spots including Plaza del Pilar and Plazoleta de Farray. Be sure to check out the local beer, Tropical, and local speciality, papas arrugadas con mojo, which translates as “wrinkled potatoes in a sauce” (these are addictive small potatoes boiled in salt water and served with a chili and garlic sauce).

Plaza del Pilar is small and quiet, and has a climbing frame for children. No one is in a rush here, making it a lovely place to chill out over a meal. Plazoleta de Farray is busier and has more of an upbeat atmosphere, with buskers each Friday night entertaining you while you eat.

Arehucas, a rum brewed in a distillery to the west of Las Palmas in Arucas, is a popular drink on the island. The distillery offers tours (in Spanish and English) for €2.50. They take about 20 minutes. A bus ride from Plaza de España takes about 30 minutes through beautiful hills and past countless banana plantations.

The tour itself isn’t extensive, but included in the price are free tastings of drinks brewed by the distillery. We try mango-flavoured gin, banana-flavoured rum, and 12- and 18-year-old rums. For an extra €5 you can taste a 30-year-old rum, which is highly recommended.

For local and traditional cuisine, there are a variety of markets around the city. The Mercado Central, located near Plaza de España, is the largest and is open every day except Sunday.

At the top of Las Canteras beach, Mercado del Puerto features a variety of food together with live music and a flea market and is open every day. The Mercado de Vegueta dates to 1858 and features fresh seafood, produce and tapas across more than 40 stalls, bars and cafes. It’s a market of variety, so if you need a haircut or your shoes need repairing, it has you covered. It’s open every day except Sunday.

On Dowling’s recommendation, the small mountain village of Teror to the southwest of Las Palmas (about a 30-minute bus ride away) has a fabulous market every Sunday full of fresh produce, clothes and traditional music. Getting there early is crucial for the best experience, and he recommends trying Chorizo de Teror, a local speciality of garlic-infused spreadable chorizo served on crusty bread.

If museums are your thing, Casa de Cólon features exhibits looking at the European expansion into the Atlantic and the travels of Columbus, specifically his passage through the island in 1492. It also displays the explorer’s belongings, including journals and drawings as well as various navigational instruments. General admission is €4.

In Vegueta, you’ll find El Museo Canario, celebrating the history and indigenous people of Gran Canaria. Here, you can see how the ancient people dressed and lived, their funeral rites and how they preserved the deceased. General admission is €4.

For a modern artistic experience, the Centro Atlántico de Arte Moderno (CAAM) has collections from Canarian artists such as painter Manolo Millares and sculptor Martín Chirino (both born in Las Palmas), as well as international collections from African, Latin American and European artists. Admission is free.

There is a wealth of graffiti and street art around Las Palmas. Some of the best can be found in the skate park at Santa Catalina, or you can check out the murals along the promenade. A number of artists have covered the city with their “tags” and it’s not long before you recognise the same names popping up. The Edificio Miller building in Santa Catalina also features a colourful piece by Sabotaje Al Montaje, an artist from the Canary Islands.

Airbnbs start from €12 per night for a private bedroom in a shared apartment, while the average nightly price for an apartment in the city is €54.

Las Palmas is low-cost. Busses are frequent and taxis are inexpensive (the most we paid was about €5 within the city limits). Walking around the city is also easy. There are numerous walkways along the coastline offering beautiful views of the surrounding scenery.

Tesla’s next-gen Model X: A frustrating €95k drive – but everyone else will love it
5

‘In Ballyhaunis there were Arab people all around me’
7