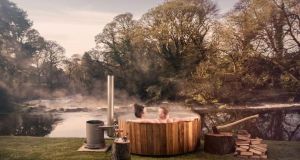 The award-winning spa at Galgorm Hotel and Spa outside Ballymena

The Original Irish Hotels group – formerly the Irish Country Hotels and Manor House hotels – was launched in Dublin today by Minister for State for Tourism and Sport, Brendan Griffin.

The group of 60 independent hotels, many of which are family-owned and operated, are spread across the 32 counties. They will collaborate to market their properties to tourists in Ireland and abroad. “The new brand will manage reservations and promote the privately-owned hotels,” said Mary Fitzgerald, group chairwoman.

The hotels will be categorised under areas of interest, such as walking and hiking; romantic and getaway; family stay; golf; country activity, and weddings.

The new umbrella group is focussing on the individual, quintessentially Irish personalities of the hotels, across a range of different services, and catering to a variety of budgets, lifestyles and travel interests.

Previously, many of the hotels were represented by either Manor House Hotels or Irish Country Hotels.

Róisín Wallace, group director of operations and marketing, Original Irish Hotels, said: “We Irish have a reputation all over the world for our people and food and the diversity of our landscapes and countryside, as well as our culture and history. Each of our hotels has its own personality and charm, and no two stays will ever feel the same.”

Most hotels in the band are four-star, with many specialising in family holidays. The Woodlands in west Cork is a classic family hotel, while Knockranny House Hotel has developed a reputation for the quality of the food by chef Séamus Comyn. The Sandhouse Hotel at Rossnowlagh is long associated with the surfing scene in Ireland. Owner Mary Britton was a great ambassador for Irish tourism and brought home surf boards for her sons from her travels.

Another member is Brooklodge and Macreddin Village, Ireland’s only fully organic hotel. In Donegal, Aisling Arnold is the fourth generation of her family to run Arnold’s Hotel in Dunfanaghy , which was recently named best three-star hotel at the Irish Hotel Awards 2018.

In Kerry, Randles family hotel has also been welcoming guests for four generations, while castles such as Cabra Castle in Cavan and Markree Castle in Sligo boast beautiful grounds and stately architecture – Markree is soon to feature as the location for a Hallmark Movie, Once Upon a Prince, which is being released later this month to coincide with the wedding of Prince Harry and Meghan Markle.

Screebe House in Connemara is famous for its seafood while food is also high on the agenda for Ballynahinch Castle, Co Galway, where you can play the country squire with hunting and fishing. In the north, Galgorm Hotel & Spa, on the outskirts of Ballymena, was named Global Spa of the Year last year, at the World Luxury Hotel Awards in St Moritz, in Switzerland.

Leaving Cert: ‘It feels aimless. I don’t know what the story is’
2

Coronavirus: ‘Like my anxiety, my survivalist mentality come and goes’
4