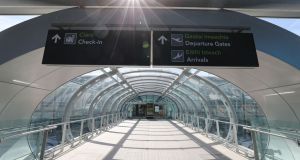 The prospect of Ryanair, Aer Lingus and other airlines getting the green light from EU authorities to offer credit notes instead of cash refunds appears more likely after transport ministers from 12 countries, including Ireland, wrote to the European Commission to make the case for vouchers.

The letter says that when the existing regulations were drawn up, the scale of the coronavirus crisis and its impact on commercial air travel “could not have been foreseen”. A voucher system would support airlines and incentivise people to travel, which would boost economies across the EU in the months ahead, it says

In recent days Aer Lingus and Ryanair have been encouraging passengers on flights cancelled because of the coronavirus crisis to accept vouchers instead of cash. Earlier this week Ryanair revised its strategy again when it wrote to affected customers to say it would exchange vouchers issued now for cash if they were not used within 12 months. Both airlines have insisted they are fully compliant with existing EU refund regulations.

The letter, which as well as being endorsed by Minister for Transport Shane Ross was signed by his counterparts from Belgium, Bulgaria, Cyprus, the Czech Republic, France, Greece, Latvia, Malta, Poland, Portugal and the Netherlands, suggests that the “obligation to reimburse cancelled tickets in cash, if the passenger so decides, places airlines in a difficult situation where they are facing a serious cash flow challenge.”

It adds that the “goal shared by the European Union and its member states must now be to preserve the structure of the European air traffic market beyond the current crisis, while considering the interests and necessary protection of passengers.”

Giving customers vouchers in the first instance, the letter argues, “will not only protect airlines and consumers in these difficult times but it will also stimulate market recovery through flexibility of travel and enhancement of consumer trust in the long-term.”

It also says that the “temporary issuance of vouchers is possible and acceptable for consumers, if some key principles are taken into account: transparent information to the passenger, non-discrimination, a common length of voucher validity, maximum flexibility of use, and a clear right of reimbursement immediately at the end of validity in the event of non-use of vouchers.”

Earlier this week the EU transport commissioner, Adina Valean, appeared to pour cold water on the idea. “It’s not an option for me,” she said. “I don’t think that this is the right path. I think companies have to put their energy and thinking into making the vouchers more attractive if they want to use mainly this instrument, but allow passengers to exercise their right to be reimbursed.”

But the European Commission vice-president for values and transparency, Vera Jourova, suggested the commission would be amenable to discussing the issue, which she described as “a very sensitive topic”. She indicated that talks would continue to find a “workable European solution” that would support both consumers and airlines. “This might result, or might not result, in some legislative proposal – it’s not clear at this moment,” she said.

The director general of Beuc, the European Consumer Organisation, Monique Goyens, reacted angrily to the moves. “We’ve seen countless examples of airlines and travel companies undermining consumers’ rights by trying to push people to accept vouchers,” she said. “Consumers should not be forced by governments to pick up the bill to bail out the travel industry.”