If you're a fan of the books, you'll love discovering Lila and Lenu's haunts around the city 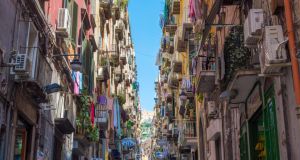 The city has lost none of its fascination: buckets are still lowered from high windows on winding lanes strung with washing lines. Photograph: iStock

The moment I hit Naples for the first time 20 years ago I knew it was my favourite Italian city. Having torn through Elena Ferrante’s Neapolitan novels as avidly as any of her 10 million other readers worldwide, I just had to go back.

The city has lost none of its fascination: buckets are still lowered from high windows on winding lanes strung with washing lines. Naples has far more tourists now, however, partly due to Ferrante fever: the four novels chronicling the friendship of two Neapolitan women, Lila and Lenu, from the 1950s to the 2000s are a worldwide hit and the series based on the first novel aired here on Sky last year. The second series premieres in Italian cinemas this month, before going on Italian TV in February.

Perhaps not since Ulysses has there been a work of fiction so firmly based in one city. Like Joyce’s Dublin, however, Ferrante’s Naples is also a microcosm of the world. Tracking the novels through the city you learn more about Naples than you do about Ferrante, because the novels are universal while the city is unique.

An all-day metro, bus and funicular ticket – reliable and cheap at €4.50 – is all you really need to follow Lila and Lenu through the city. You could organise your Ferrante tour into four different areas.

Lila and Lenu’s neighbourhood is never named, but residents of Rione Luzzatti immediately recognised it as theirs. The local writer Maurizio Pagano, who was born in the Rione, questions how true to life the books are.

The obvious rebuttal is that they are works of fiction, but that defence is confused by the representation of the Rione in the excellent TV series, which was achieved in consultation with Ferrante.

Who is Elena Ferrante? That’s the big question. Ferrante is a pseudonym, and nobody knows who she really is. Pagano and many other locals favour the theory, denied by Ferrante’s Italian publisher, that the story was originally told by the Neapolitan writer Domenico Starnone and that the books were written either by him or by his translator wife, Anita Raja.

To get to Rione Luzzatti, take the Linea 2 metro to Gianturco station, walk out the door, turn left and left again and you are facing the iconic “tunnel” through which the girls venture towards the sea in My Brilliant Friend. The road which passes through the “tunnel” is the “Stradone” on which much of the action of the novels takes place.

Cross the Stradone and go down Via Beato Leonardo Murialdo. On your left between the apartment buildings you’ll see the Church of San Giuseppe Maggiore, where the 16-year-old Lila’s ill-omened wedding takes place. The library where Lila borrowed books on the tickets of all her family is on your right and adorned with murals of characters from the TV series.

The kids still hang out in the gardens across the road just like Lila and Lenu did.

Enter any one of the classic courtyards of Rione Luzzatti, which were built in the Fascist 1920s. The grates through one of which Lila and Lenu throw each others’ dolls into the basement of the apartment block are clearly visible.

If you want to climb the inside stairs like the girls did when they approached Don Achille’s apartment to ask for their dolls, and you can understand Italian, do a tour with Pagano (7.mauriziopagano@gmail.com). He’ll also bring you down into the dark cellar where the dolls were never found, and up to the roof where Lila had her first experience of “dissolving boundaries” as she watched the fireworks.

For a Ferrante tour in English, contact Sophia Seymour (lookingforlila.com), who collaborates with Pagano. Her tours also take in the Borgo Sant’Antonio for a taste of the lively, working-class Naples of the novels. Rione Luzzatti, she explains, is now essentially middle-class, and it’s therefore not surprising many locals resent the books.

Her bespoke tours for up to five people cost €270, or add €35 per person for a Neapolitan lunch including mind-blowing local pastries at Pagano’s Rione Luzzatti apartment. What a perfect book club tour that would be.

The Metro Linea 1 will take you to the port, where a range of services to the island of Ischia are available: my return trip cost €27, plus €4.50 for an unlimited bus ticket in Ischia.

The scene of Lenu’s tragic tryst with the revolting Donato Sarratore, the Spiaggia dei Maronti, is as disappointing as he is, wholly domesticated with sun umbrellas. By contrast, Forio, where Nino stays, is as enticing and sophisticated as he seems, a gorgeous mass of white lanes and churches.

It is in the fascinating old centre of Naples that Lenu expands her intellectual boundaries. Starting at Piazza Dante, which is on Metro Linea 1, you can enter the enchanting world of Port’Alba, where Lenu searches for second-hand books.

As you pass up Via San Pietro a Maiella you can take a left into Via Mezzocannone, where Lenu worked in a bookshop. You can join Via dei Tribunali where Lenu takes Lila to a posh party at professor Galliani’s. The professor’s daughter joins the Red Brigades, whose violence and hypocrisy Ferrante mercilessly uses as a counterpoint to that of the Camorrist Solaras.

Close by there are many entry points into the subterranean Naples where Lenu fears Lila will disappear like the souls of purgatory in the Church of Purgatorio ad Arco. Lila becomes obsessed with the nearby church of San Giovanni a Carbonara because it is on the site of the city’s ancient rubbish dump, the “Fosso”: “The entire planet”, claims Lila, “is a giant Fosso Carbonario”.

Get the Metro Linea 2 to Pizza Amadeo, where Lila agrees to meet her former lover Nino. From here you can wander down fancy Via dei Mille, where the neighbourhood girls feel like aliens in My Brilliant Friend.

It is on iconic Piazza dei Martiri that Michele Solara opens Lila’s shoe boutique and she conducts her clandestine affair. The square, with its four lions representing the march of Naples towards the Italian republic, becomes symbolic of the betrayal that Italian unity has been for the city.

From Piazza dei Martiri you can stroll up leafy Via Chiaia towards the grand Piazza del Plebiscito where the sleazy Solara brothers drove the two neighbourhood girls they bundled into their Fiat. Here the grown-up Lenu introduces her daughters to the 19th century grandeur of the Caffé Gambrinus.

You can walk back to Amadeo along the seafront, the “Lungomare”, where Lenu’s father gave this Neapolitan child her longed-for first view of the sea.

Close by, you can visit most of the posh neighbourhoods to which the characters aspire and climb: Via Vittorio Emanuele, where Nino establishes his bourgeois wife; and Via Tasso, where he establishes Lenu and her daughters.

Take the funicular up to the Vomero and continue to the castle of Sant’Elmo, the route towards a panoramic view of the city which Lenu follows when she discovers the deception at the heart of her great love affair. These journeys up the hills towards a view of the bay symbolise social mobility in the books: a perspective on life accorded only to the few.

Victoria White was a guest of Aer Lingus, which operates up to seven flights a week from Dublin to Naples from March to October. See aerlingus.com

We carry these wounds with us throughout our lives
9