Ryanair reports a surge in July and August bookings, in spite of advice to stay at home

Ryanair is increasing pressure on governments to ease restrictions on people flying at the same time 1,000 Irish scientists are calling for stronger measures to bring the epidemic under control. Video: Reuters 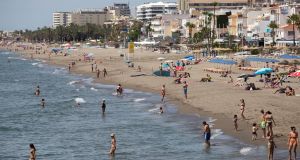 Beachgoers at La Carihuela beach in Malaga, southern Spain. Spanish beaches have reopened and Ryanair reports a surge in holiday bookings from Ireland for July and August. Photograph: Daniel Perez/EPA

Ryanair has increased the pressure on the Government to ease restrictions on people flying to and from Ireland by suggesting there has been a surge in Irish bookings for destinations in the sun for July and August.

In an interview published on Monday, intended for a UK audience, the chief executive of the airline Michael O’Leary said an emergency legal challenge was being planned to halt the quarantine in the UK.

He said British people were booking outbound flights for holidays despite the quarantine but Europeans were not coming to Britain.

Asked whether Ryanair would cancel July and August flights if the UK quarantine remained in place during those months, O’Leary said: “No, because the flights are full outbound of the UK. British people are ignoring this quarantine, they know it’s rubbish.”

He said legal action, proposed by British Airways and supported by both Ryanair and EasyJet, seeking injunctive relief has a “high likelihood of success”. Legal papers are due to be filed by Tuesday, he added.

A spokesman for the airline told The Irish Times that the same trend was being noted amongst Irish customers, despite a quarantine requirement here, as well as an official advisory from the Department of Foreign Affairs warning against non-essential travel.

“The same applies [in Ireland]. We’re seeing a surge in bookings to holiday destinations such as Spain, Portugal and Italy, both from the UK and Ireland,” the spokesman said.

O’Leary has previously castigated the authorities in Ireland for imposing the quarantine.

He went on to say that the chief medical officer, Tony Holohan, and Minister for Health Simon Harris would be crushed under a “stampede” of Irish families rushing to go on foreign holidays this summer. “They are booking in their thousands already over the last 10 days. All they want to know is when can they fly, and nobody’s worried about the Irish or the UK quarantine.”