The 1,200-year-old Moroccan city has that captivating sense of being at a crossroads: of cultures and of time 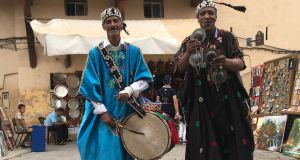 The medina, Fès el Bali, is said to be the largest car-free urban area in the world.

Dusk is falling, and we’re sitting on the rooftop of the Riad Fès, sipping Moroccan wine, as calls to prayer echo across the surrounding hills. Below us, the Fès medina spreads out, a chaotic warren of narrow streets and rambling alleys. Little by little, as we sip, lights come on and the medina’s character changes.

Founded more than 1,200 years ago, in 789, the medina, Fès el Bali, is said to be the largest car-free urban area in the world. It is also a Unesco World Heritage Site. Dive down during the daytime and discover a street devoted to silks, one to carpets, another to books, yet another to fruits. There you can choose the sweetest of figs, become flummoxed at the range of olives, and lured around the corner by the waft of spices.

In the meat section, sprigs of coriander are tied at the nostrils of a butchered camel, as if the dead beast might still baulk at the smell of fish from the nearby mongers. This is not even the most pungent part of the medina. That honour goes to the Chouara Tannery. Built in the 11th century, it is the largest of three in the city.

It is hard not to think of the camel and its coriander as I am handed a bunch of mint to sniff, in counterbalance to the aromas rising from vast stone vats in which leathers are steeping to soften. They are filled, I’m told, with a mixture of cow urine, quicklime, pigeon guano, salt and water. My mint seems an insignificant barrier, and yet the scene is so fascinating I quickly forget the messages coming from my nose.

Other vats are richly hued receptacles, ready to give colour to the leather. There is poppy red, henna orange, indigo blue. The hot sun dries everything. You watch from the balconies of surrounding leather stores, where you’ll be offered everything from jackets to bags, footstools to slippers. Yes, you’re assured, it’s all made here, naturally dyed. I wonder at a peacock blue jacket, but decide to go along with the romance of it all. If you’re so taken, don’t forget to bargain for your prize.

Anonymous doorways open up to vast palaces, or smaller homes. More than 100,000 people live in the 2.2sq km space. Our guide tells us that this living, cheek by jowl, creates a strong sense of community. We pause in a square where copper workers are beating out pots. Despite the incredible age of the medina, and its layers of constant history and use, it’s pleasingly clean and well kept. Millions are being spent on its ongoing restoration and refurbishment, a project that began a decade ago.

Here is the site of Khizanat al-Qarawiyyin, believed to be the oldest library in the world. It, and its adjacent university, were founded by a woman, Fatima al-Fihri, in the 9th century. In 2016 it reopened after years of restoration, at a time when other Islamic libraries, such as that in Mosul in Iraq, were attacked and burned by Islamic State militants. In such an environment, Morocco seems to tread a careful line.

For example: there’s the wine we’re drinking in this predominantly Islamic country. It’s a delicious Volubilia Rouge; wine-making flourished in Morocco, also in testament to the French colonial heritage, until European import quotas were introduced; but it has recently rallied again. The sale of alcohol is prohibited only to Muslims, and it’s not unusual to see headscarfed women sip soft drinks alongside other friends enjoying cocktails. This is just one example of how this beguiling city manages its mix of cultures and mingled histories, and which makes it such a fascinating place to visit.

In many ways, Fès seems like Marrakesh’s quieter little sister. Despite actually being larger, and older than that flashier city, and Morocco’s imperial city, Fès is a calmer spot. And in the medina, there’s a sense of timelessness to it all, and a feeling that it is, for now, still untouched by the worst depredations of global tourism.

Leave the medina, and you’re stepping right back into the 21st century with a bang. There’s the noise of cars and motor scooters, a large Carrefour supermarket, a McDonald’s. It’s wrong to expect people, who make their lives in what also happen to be picturesque tourist destinations, to live in time-capsule theme parks, but it still feels jarring after a day spent enjoying the absence of such “amenities”.

At night, the medina is another world. After an epic dinner at the Riad Fès, a beautifully restored palace which, despite being in the medina, is an oasis of elegant charm, I fancied a walk. And so we wander down the now quiet lanes, finding new things to see at every turn.

With the shops and stalls shuttered, you can drink in the rich carvings and plasterwork, the tiling and gold leaf, the wooden bar across a lane – set at a height to prevent animals from reaching the holiest centre. Some alleys are so narrow, just a strip of night sky appears overhead, but lanterns illuminate. There are many places in the world in which I wouldn’t feel safe exploring in a small, clearly foreign group after dark, but Fès, it seems, isn’t one of them.

So beguiled are we, that we’re very late getting back, navigating through the maze of streets by gradient – we know we’re staying up the hill, so we stick to ascending and, sure enough, we start to recognise landmarks.

The next day, after a yearning glance at the Riad Fès shaded gardens and outdoor pool, we’re off to the Hotel Sahrai in the newer part of town. Here, we’re rewarded with an infinity pool, the Jungle rooftop bar, and an exceptionally soothing massage at the Givenchy spa. Soon the grit of the medina, and the feel of its hills on the backs of my legs are smoothed away.

So is it Fès or Fez? You’ll find both, though purists say that Fez is the red hat with the tassel. I resist buying one. The tea glasses and silver pot are plenty. Fès has that captivating sense of being at a crossroads: of cultures and of time.

There are twice-weekly direct flights to Fès-Saïs Airport from London Gatwick with Air Arabia (airarabia.com), and with Ryanair (ryanair.com) from Stanstead. Rooms at the Riad Fès start from €210 (riadfes.com), and at Hotel Sahrai from €180 (hotelsahrai.com).

Milder winters and deliciously warm springs and autumns make Fès a perfect shoulder season spot. In mid-winter, temperatures hover around 18-20 degrees, but plummet after dark. Summer can be uncomfortably hot, so February to late April is an ideal slot for a break, as is October-November. Extend your visit with day trips to nearby Volubilis and Moulay Idriss: an epic Roman ruin, and a picturesque hill town. Or move on to the beaches at Tangier or Rabat to make a week of it.

How do you get bereaved fathers to talk? Bring a football
3