Gabriel Faherty shows visitors how Aran Islands Goat’s Cheese is made, and takes them on a food tour of Inish Mór too 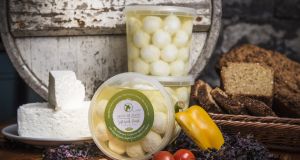 You could be forgiven for thinking that islanders are somewhat at a disadvantage when it comes to sourcing high-quality produce, but, according to one island-dwelling producer, it couldn’t be further from the truth.

Gabriel Faherty lives on Inish Mór, the biggest of the Aran Islands, with his wife Orla and their four children – Alan (10), Eoin (8), Donnacha (6) and Fia (4). Having spent 20 years as a deep-sea fisherman, the island native had been living on the mainland for several years, but a little over a decade ago, decided to return to his roots and establish a goat farm, where he and Orla could make their own cheese.

“We moved back to the island when Orla was pregnant with Eoin, and purchased 50 baby goats shortly after our own second baby was born,” he says. “We had been thinking about the idea for a while, and after many sleepless nights decided to go for it, so bought the goats, and then built a cheese house, goat shed and milking parlour.

“These days, the work involves milking the goats once a day and making cheese twice a week, which is now sold in delis, shops, restaurants, hotels and cafes both on the island and across the country.”

Over the years, Faherty’s herd has quadrupled in size to keep up with demand for the various types of cheeses. Their brand, Aran Islands Goat’s Cheese, includes the traditional soft balls in oil, feta, a Gouda-style cheese and a Parmesan-style one too. Now the veteran fisherman, whose previous job took him as far away as Alaska and South America, has become an advocate for artisan producers and runs food tours of the island to showcase local produce.

“I have always been involved with tourists, firstly as a pony and trap driver as a young teenager, and later as a minibus tour operator, so setting up the tours was a natural step for me,” he says.

“There are a lot of people involved in food production on the island now. Orla’s uncle has a seaweed company – Blath na Mara – picking, drying and milling the different types, there is an organic farm growing vegetables and herbs, lots of locally caught fish and shellfish, free-range eggs and our cheeses which we hand-roll into boilie form and add different flavours, including the local seaweed.”

Their food tours “are a celebration of all that is best on Inish Mór”, Faherty says. They include a visit to the farm to meet the baby goats and taste the cheese, foraging for seaweed along the shore line, and lunch at his mother-in-law’s cafe, Teach Nan Phaidi, named the Georgina Campbell cafe of the year 2016.

“We also do educational tours for schools who want to experience farm life first-hand, and talk them through the process of farm-to-fork.”

Faherty is one of Fáilte Ireland’s 16 “Food Champions”, selected from 400 nominees in 2016 to promote Irish food and support food tourism across the country. In March this year, he was awarded best local food hero in Connacht at the regional Irish Restaurant Awards.

“Food Champions are helping to tell Ireland’s food story and we come from a wide range of food, beverage and hospitality sectors around the country,” Faherty says. “Basically, we are Fáilte Ireland’s eyes and ears on the ground, dealing with local and foreign tourists on a daily basis, as we can see first-hand how new food trends and visitor experiences are evolving.

“We meet a few times a year for an official Fáilte Ireland get-together, and are constantly in touch helping each other out to the best of our abilities. Because of our wide-ranging skillsets and experience, this can be very helpful when organising a food event.”

Running a business while bringing up four children is no easy task, but Faherty says the food industry is evolving all the time, which makes it easier to succeed. Of course, having a supportive partner is crucial.

“To say the children are a handful would be an understatement, but to be fair they are a great help around the farm, feeding the baby goats and helping out in the cheese house from time to time,” he says. “But island life is not easy, and anyone who tells you otherwise hasn’t experienced a bad winter. The weather can hamper deliveries to the mainland. But by having a good working relationship with the chefs we deal with, compromises can be reached.

“The quality of food has greatly improved over the last 10 years, with greater emphasis on using local produce, so this is also good.

“Both myself and Orla work well together. She has been a great support right from the start. She is an optimist, but I am stubborn and don’t take failure well. I believe if things are not working you just have to try harder – ‘nothing is impossible’, as my grandfather used to say, and hard work always pays off in the end.”

Tours of the Aran Islands Goat’s Cheese facility, combined with a historic tour of the island, cost €30 per person. Advance booking is essential. See arangoatcheese.com or call 087-222 6776