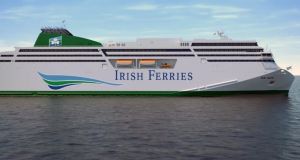 Irish Ferries has cancelled thousands of bookings for August for the WB Yeats, the company’s brand new luxury vessel.

What is going on with Irish Ferries now?
For the second time in less than two months the company has thrown the plans of thousands of people due to travel to France this summer into complete disarray.

How so?
It has cancelled thousands of bookings for August for the WB Yeats, the company’s brand new luxury vessel.

How many people are we talking about?
Irish Ferries says about 6,000 bookings. This is in addition to the 2,300 bookings cancelled at the end of April. The ferry business counts a car or a coach as a single booking so an individual booking may cover six people travelling in a car or even more on a coach. That means as many as 20,000 people will now not be able to travel on the days they had intended. All told the number of people affected this summer is likely to be close to 30,000.

That is a lot of people. What is the ferry company going to do for them?
It has offered people alternative spaces on the MV Oscar Wilde. But as ferries do not travel to and from the same places on the same days, those who chose to be rerouted will have to leave a day or two earlier than intended or a day or two later. They will also have to leave from Rosslare rather than Dublin. Irish Ferries has now added a “land-bridge” option. This would see people choose to sail to Britain from either Dublin or Rosslare and drive across country before taking another ferry to France. People who choose this option, will be reimbursed the cost of their fuel from the port of arrival in the UK to the port of arrival in France. Passengers can also get a refund. Oh, and all customers have been offered a €150 voucher by Irish Ferries, for sailings next summer.

Did you say next summer?
Yes, the company has once again decided to offer people a voucher they can redeem in 2019 rather than one they can use this year. When it did this in April the offer was labelled in some quarters as derisory with some caught up in the cancellations saying they would never travel with the ferry company again.

Who looks after consumer rights when it comes to sea travel?
The National Transport Authority is the enforcement body in Ireland for consumers travelling by sea. As with air travel, passenger rights are governed by EU regulations.

Are the regulations any good?
Time will tell. If a ferry is cancelled, passengers have a right to a re-routing or a full reimbursement of the ticket price. The rules also say if an overnight stay is necessary as a result of a ferry cancellation, then the company must pay for accommodation which is limited to €80 per night per person for a maximum of three nights.

And what about compensation?
That is decided on a case by case basis. In this situation people might be in line for 50 per cent of their ticket price.

Might be?
Compensation does not apply if delays or cancellation are caused by weather conditions endangering the safe operation of the ship, or if “extraordinary circumstances affect the performance of the service”.

This is hardly extraordinary circumstances is it?
Irish Ferries used that exact phrase in its correspondence with passengers, as it did following the April cancellations.

But is the failure of a company to get its boat into the water on time really extraordinary circumstances?
Ultimately any decision rests with the NTA and it is the transport authority that will have to rule on whether widespread compensation will be due to affected passengers. While mass flight cancellations are commonplace, it is a very different story when it comes to non-weather related ferry cancellations and the eight-year-old EU regulations governing sea transport has yet to be tested in any significant way.

How do I go about claiming compensation?
First you must contact the company making your claim. They have a month to pay or not pay. If you’re unhappy with its response you contact the NTA which will make a ruling.

I have paid for car hire and a hotel for the day I was due to arrive but I am not arriving until two days later. Will I get the money back?
Not under EU Regulation 1177/2010 you won’t. Your travel insurance might come to your aid and if you booked a camping package holiday you will be fully covered.