Airline is charging up to €88 more for replacement flights, according to consumer magazine Which? 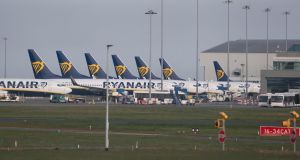 When one passenger tried to move their Dublin to Málaga flight to August, they were quoted €137. But the price of a new ticket on the same plane was €49. Photograph: Colin Keegan, Collins Dublin

Ryanair has been accused of ripping off passengers after it was found to be charging £80 (€88) more to those rebooking cancelled flights.

Meanwhile, rival low-cost carrier Wizz Air is still charging €30-€40 a passenger to rebook on flights to Hungary and Bulgaria, or €60 per passenger, per flight to cancel, despite the fact that both countries have closed their borders.

Ryanair made much of its offer to allow its passengers fee-free changes after it was forced – along with other airlines – to cancel thousands of flights.

While it has waived its change fees, passengers still have to pay the the difference if the new fare is higher.

But according to Which? the airline has been hiking the cost of those replacement flights by us much as £80 .

The consumer group said that when one passenger tried to move their Dublin to Málaga flight to August, they were quoted €137 a passenger.

But when he checked the Ryanair website for the price of a new ticket on the same plane, it was just €49.

Another passenger trying to move flights from Manchester to Alicante was told the new fare was £99. But, again, when they went on the Ryanair website as a new customer, they found the same flight for £52, almost half the price.

The Guardian found that Ryanair priced every flight at €135.99 from Dublin to London Luton over an entire year when the flight change portal was used. However, the same flights were available for as little as €17.99 when a new booking was made.

Ryanair has so far not responded to requests for comment.

Passengers have been advised against all but essential international travel from the Ireland and the UK, but airlines have been making it almost impossible to get a refund even after the airline cancelled their flight.

All flights on EU carriers within, or into the EU, and all flights leaving from an EU airport, are protected by the EU’s “denied boarding” rules, which require refunds or rerouting when flights are cancelled.

The problem for consumers is that enforcing these rights is proving very difficult. The airlines push those with cancelled bookings to their website or app. Refunds are only being processed by customer services, which is now impossible to contact.

Which? described Wizz Air’s stance in charging its passengers to switch flights as the “the worst example we’ve seen”. – Guardian Service