Cycle series: Take a deep breath and mount up 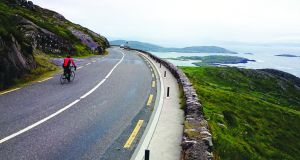 The Ring of Kerry route affords many wonderful views.

This one will take some work, so take a deep breath and mount up. Cycle into Killarney and go left just after the mini-roundabout. Follow this road for 1.5km and go left again. This is the N70 and is the road you follow for the next 137km until you pick up the N71 at Kenmare. Follow the signs for Killorglin.

A cycle lane affords a modicum of protection from the heavy traffic in this area – assuming you’re not doing this as part of the charity cycle, in which case the road will be closed to traffic. By now, the Macgillycuddy’s Reeks are in view, including the majestic Carrauntoohil at 1,039m. The road to Killorglin is straightforward and variously of poor and good quality. High hedges limit the views.

At Killorglin, you are greeted with a statue of King Puck, the eponymous hero of the town’s annual festival, Puck Fair. Cross the bridge into the attractive village, climb the hill and go left to Glenbeigh. By now, the views have started to open up and the mountains of the Dingle Peninsula to the right announce themselves mistily. The road to Glenbeigh again is great in parts and poor in others. Approaching Glenbeigh, cross a bridge over the River Caragh, which drains the Alpine-like Caragh Lake over the mountains to the left.

Enter the pretty village of Glenbeigh and continue through to one of the great cycling roads in the country. As the road climbs slightly, the magnificent views over Dingle Bay come into sight. The road sweeps onwards and downwards into Cahersiveen, birthplace of the Liberator, Daniel O’Connell. Take a break here or just a bit further on at Waterville – made famous by Charlie Chaplin, who used to holiday there. Leave Waterville under the watchful eye of Cahernageeha Mountain as the road rises on a long curve towards Coomakista Pass. Take a mini-break here to marvel at the views: below are Scariff and Deenish Islands, and Dursey Island at the tip of the Beara Peninsula which, like a farmer, minds the Bull, the Cow and the Calf islands farther out.

Charge down the hill into Caherdaniel and on to Castlecove and, if well-rested, strike on to Sneem, 15km from Castlecove. A draining, badly surfaced bog road before Sneem is quite a challenge. From Sneem, it is 14km on very good roads to the peaceful Blackwater Bridge and another 13km effectively downhill to Kenmare. Take another deserved break here.

There are several great cafes and bars in the town. By this stage, 80 per cent of the cycle has been achieved. The climb to Moll’s Gap from Kenmare is on a regular gradient but on an appalling surface for 4km.

Take another mini-break at Moll’s Gap for the wonderful views of the Beara Peninsula. There follows a high road for about 4km before a stupendous downhill cycle through Killarney National Park, with lakes, trees and dappled sunlight just a blur. The road eventually levels off and10km further on, return to the car. Congratulations. You’ve done it.

A good place to start is at the free car park on the Muckross Road, 3km south of Killarney. A number of jarveys use the same car park. The benefit of this is made plain when you finish and don’t have to compete with Killarney traffic.

At first sight, this is a daunting prospect. There are 171km of roads to cycle and a total ascent of 1,759m. However, break it down into its constituent parts and it is less daunting: Killarney to Glenbeigh35km; another 25km to Cahersiveen; another 30km to Caherdaniel; 20km more to Sneem; another 25km to Kenmare; another 10km to Moll’s Gap; and the last 25km to the finish. Suffice to say there are much shorter routes in this guide that are tougher.

An edited extract from Cycling Munster – Great Road Routes by Dan MacCarthy is published by The Collins Press, price €14.99/£12.99. It is available in all good bookshops and online from www.collinspress.ie.