Chaos on Carrauntoohil: Too few guides, too late starting 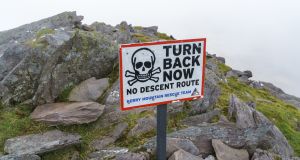 If you have not been up a mountain previously, Carrauntoohil may not be the recommended starting point. Photograph: Getty Images

When Killarney gardaí alerted Kerry Mountain Rescue to an incident on Carrauntoohil last weekend, it seemed like another “dinner in the oven” evening for the highly trained volunteers.

The preliminary call-out details for Ireland’s highest summit just before 6pm on Saturday, February 17th, were that there were “five people stranded on the Devil’s Ladder”, but apparently one was injured. Weather had been clear that day, but wintry with some snow.

News reports of a successful outcome would be brief enough in the next 48 hours. Over the following days, however, details would emerge of a more complex situation that faced the rescuers: reports of chaos, panic, fear and confusion on the “hill” until assistance arrived.

The sequence of events began after a large party from the midlands and several individuals set out for Carrauntoohil’s summit last Saturday morning. Participants who had paid for a guided ascent had been informed of snow conditions on the mountain, but said there was no advice on bringing an ice axe and crampons.

As Tony Doherty writes in this newspaper this weekend, the Magillicuddy Reeks are the most popular and most testing mountaineering destination in Ireland. Snow poses challenges for the inexperienced, he observes, in obliterating familiar paths, while verglas, a thin coating of ice on rocks, can “see you hurtling down the mountainside at destructive speed”.

Bit of a shock

The guide for the day was attached to a family business, described as having over 25 years of experience in taking groups up mountains at home and overseas. The charge was €50 for people taking the bus, and €25 per person for those travelling by car.

“There didn’t seem to be any checks when some people turned up in runners and hoodies,without even a small rucksack,”one of the participants says . “We got a bit of a shock when we counted about 40 people in our group, with one guide and just one assistant sweeping up the rear.”

Another walker who has climbed in the Reeks several times before says the guide emphasised they would stick together, and that there would be ample time to stop for breaks and photographs. This seemed strange to her as she had estimated it would take at least seven hours, and departure time was already late at 11am.

At the top of the Devil’s Ladder, which the group reached at around 2pm, one woman was struggling, and remained behind to wait for the group on descent from the summit. There was compact snow and ice on the ground.

The party reached the summit at about 3pm, and the plan was to descend via the “Zig Zags”, an old mule path down the north side of Cnoc na Toinne. This descent is regarded as safer, although serious accidents have occurred on that part of the route before. However, some of the walkers opted for the Devil’s Ladder.

At this point the group leader was concerned about several people who had fallen behind, including a woman who lost her runner and several others who were cold and sick. Participants say he turned back up the mountain after a call for assistance from his sweeper.

“There was no briefing for the rest of us,”one walker says. “Normally in a situation like that the most competent would be appointed to take control and lead the rest of us. We all just had to manage, so we kept going to the Zig Zags.”

To approach the Zig Zags involves a climb up again across Cnoc na Toinne, where ground falls off precipitously to the left, and this can be intimidating for the inexperienced walker.

“The snow was so thick and there was ice in places, and it was hard to get a grip and so we slithered down on our backsides,” one of the participants says. “At this stage we had broken into smaller groups.

“By the time we got to the Hag’s Glen it was dark, and we had to guess our way. We couldn’t figure out which gully was which. One man fell into a river,”she says.

“Most of us didn’t have torches, and we were relying on the light of our mobile phones. It was dark when we met members of Kerry Mountain Rescue coming up, and they directed us to the carpark.”

Back up the hill the rescue team found several of the walkers who had been struggling close to the top of Cnoc na Toinne. The weakest among them responded to some oxygen and food and warm clothing, and was encouraged to walk out rather than be carried by stretcher.

The rescue team opted to descend by the Devil’s Ladder due to the icy conditions on the Zig Zags. On the ladder three people were roped down by the rescuer team. As more assistance arrived, rescuers came across an eastern European woman, alone and in a confused state, and with a bad gash on her head.

She was not part of the guided walking group, had not contacted the rescue team. She said afterwards that a tourist officer had told she would ascend and descend in six hours. Had the original call-out not been made, it is believed she might not have made it through the night.

Kerry Mountain Rescue does not wish to comment on the specifics of the call-out as it is always happy to respond, and the guide did take the initiative in alerting the emergency services.

Mountaineering Ireland, the governing body for walking and climbing clubs, confirms it received a number of calls from people last week who were very concerned about a perceived lack of planning. It also does not want to comment on the specifics.

Three issues emerge – the late time of departure, the size of the group and the ratio of guides to walkers. That ratio depends on individual locations, experience of participants and topographical and meteorological conditions. Trained mountain leaders who might be well capable of a 20 to one ratio on a lowland route would normally opt for an eight to one ratio or thereabouts on a mountain like Carrauntoohil.

Mountaineering Ireland says that there is no legal requirement for guides to hold certain qualifications when taking people into mountains for reward in Ireland, but it has a recommended training scheme that includes separate summer and winter mountain leadership certifications.

Mountaineering Ireland’s honorary president Paul Kellagher was up the Cairngorms this week in snow, and was struck by the number of people kitted out with crampons and ice axes, well prepared for the conditions. Still, he notes, there were several incidents in Wales and Scotland over the past week.

“So people have to be equipped for the mountains with proper clothing, footwear and navigational skills, and they also have to be ready to ask questions if there is something they are not comfortable with,”he says.

The guide with Saturday’s group was contacted by The Irish Times but declined to comment.

Gerry Christie, a Kerry-based mountaineer who guides occasionally, says hiring a guide is a good idea if one has only rudimentary navigational skills. Satellite technology should never be relied on as a primary aid in mountains.

The Mountaineering Ireland website lists appropriate qualifications, approved instructors, and its affiliated clubs and adventure centres have leaders with the relevant certification.

“If you have not been up a mountain previously Carrauntoohil may not be the recommended starting point,” he says, and it requires at least seven hours for moderately fit people with breaks

“Turn back if a member of the party is struggling before reaching the mountain proper. If on Carrauntoohil itself, do not turn back unaccompanied.”

He says a recommended winter start would be before 9am to allow for some contingency time and early sunset. “Better to be looking at the time than looking for it.”