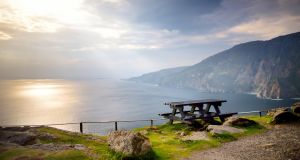 Ireland has been named best destination in Europe at the annual Travel Weekly Readers Choice Awards in New York. Ireland won the award against competition from Italy, France, Greece, Spain and England, the sixth year in a row for Ireland to claim the top European prize.

The awards, which are voted for by thousands of Travel Weekly readers,  are in 79 categories, mostly resorts and hotel chains, airlines, tour operators, car rentals and cruise companies, with a small number of destination awards, only one of which is chosen from Europe.

Accepting the award in New York’s Conrad hotel on Thursday, Tourism Ireland’s head of North America Alison Metcalfe, said: “Travellers nowadays have tremendous choice, which makes it more important than ever for us to ensure the island of Ireland stands out from other destinations - so this award is really good news”. She said it’s been a good year for Irish tourism from the US, and Tourism Ireland is about to start to an extensive promotional drive next year in the US.

By the end of 2019 Ireland will have had about 2.05 million American and Canadian visitors, delivering revenue of €1.89 billion.

All eyes on Tenet, the spy movie with everything to prove
Browser: Lively fictional retelling of a fateful year for Ireland