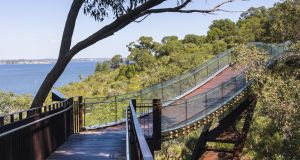 Bridge running through the treetops in Kings Park, Perth, Australia

It’s a long way to Perth from Dublin, so the last thing you want is to be trapped in the middle of a row of seats on one leg of a 17-hour flight. The young lad from Monaghan, sitting at the window seat, had had the mother of all send-offs the night before our flight last winter, and once his dinner had been devoured, he caved. The feed of pints not too many hours before, combined with the food and the exhaustion of all the goodbyes, had rendered him comatose. He was heading back to Australia to work on a major construction project, working 12-hour days, 14 days at a time and loving it. Once he’d told us his story, he was out for the count. Weren’t we glad we had the aisle seat.

Western Australia is full of young Irish people working in every industry and profession, so there must be an awful lot of Irish parents getting ready to make the big trip to Oz this Christmas, to see for themselves what the attraction is.

The major tourist destinations like the Great Barrier Reef, the Blue Mountains and Sydney Harbour Bridge are well documented, but for many, the vastness of Western Australia is uncharted territory.

Perth is one of the most isolated cities in the world, being 2,200km from the nearest city, Adelaide. Although it is more expensive to visit during our winter, there is nothing so amazing as leaving the dark and cold of Europe in December or January and emerging at Perth airport to a pure blue sky, and being picked up by a long lost “relly”, as they call them.

For many of us, when we go to the sun we go somewhere “foreign”. Australia at first glance doesn’t seem “foreign” at all, but then you start to see the differences.

Try to imagine what it would be like to live in a city where the public facilities are better than amazing. It’s the result of a mining boom; where people don’t think it is strange to have three 50m swimming pools in one complex even though there is another equally good complex 5km down the road; where you never wonder if there might be a public toilet nearby, where at almost every beach there are free hot showers and the use of free gas barbecues; where a cycle/pedestrian path runs for hundreds of kilometres along the coast and it is not full of cracked tarmac and potholes.

And to crown it all, the citizens don’t feel that they have to be eternally grateful for all of these amenities, because that’s how life is supposed to be.

Then there is the whole business of going to bed early and getting up at the crack of dawn to pack in whatever you can before you go to work, or even more bizarre, having a 40th birthday party breakfast at 9.30 on a Saturday morning. They tell you it’s because they want to get things done, before it gets too hot. That’s their story, but the wind – locally called the Freemantle Doctor – starts to blow around 11am and keeps things reasonably cool most days.

Freemantle is the port of Perth. In times past, the British deposited their unfortunate convicts there at the Swan River Colony. For the Irish visitor, it is intriguing to see that the old prison is pretty much a carbon copy of Kilmainham Gaol. No point having two different designs when one would do all over the empire. Nowadays we can all spend a night there, not courtesy of Her Majesty but in its reincarnation as a youth hostel.

Like many old towns in Australia, Freemantle has a sort of genteel, quaint atmosphere, but added to this there is a bit of a bohemian edge, with lots of little boutiques and great markets. Most of the old colonial buildings are made of sandstone, built in the 1800s by the convicts themselves. This was in the early days of the Gold Rush, when thousands of hopefuls flocked to Western Australia to try their luck in the Goldfields. No doubt many a freed prisoner braved the harsh conditions of drought and blazing sun in the hope of getting rich, though by all accounts, many of the men who found gold squandered the money pretty quickly and were no better off in the end.

The Perth Mint in the city centre is a fascinating place. In the early days there was very little money in the city, so when the miners came back to town after months digging for gold, they couldn’t exchange the gold for money so they took it to the mint, where it was turned into gold coins.

Despite having thousands of kilometres of unspoiled coastline, people don’t spend endless hours at the beach

Here you can see molten gold being poured to make ingots – those blocks of gold you see in James Bond films. You can also read about the dog who was scrabbling in the earth beside his master, who had had no luck. Suddenly Fido, or whatever he was called, unearthed an enormous lump of gold and the rest is history. Dog, miner and the lump of gold can all be seen in the little museum.

Living in Perth is all about constantly experiencing the natural environment. The city centre is built around a lake, formed by the confluence of the Swan and the Canning rivers. Houses were built all around it, making it possible to live right in the city centre with your garden on the waterfront. People kayak, sail and swim right outside their front doors. Visitors can hire equipment and join in.

There is a huge sense of open space everywhere in Perth. Until relatively recently, every house was built on a quarter acre block of land, and almost all of the houses were only one-storey high, which allows the natural vegetation to be the predominant feature.

Everywhere in and around the city there are national parks, vast areas of unspoiled natural landscape with wallabies and kangaroos hopping around, birdsong that you don’t recognise, bushes with magnificently colourful flowers, and giant eucalyptus trees whose scent fills the hot air. And this is a city!

With an average of eight hours of sunshine a day, everything in Perth revolves around the outdoors. Despite having thousands of kilometres of unspoiled coastline, people don’t spend endless hours at the beach. That’s what happens when you take crystal clear, warm, turquoise water, powdery white sand and endless sunshine for granted. You get blase. There are so many more ways to be outdoors.

Kings Park, high on a hill overlooking the lake, is one of the largest inner city parks in the world. It is home to the Western Australian Botanic Garden, which displays 3,000 species of the state’s unique flora. Visitors from the northern hemisphere will be spellbound by the incredible variety of trees and flowers, which they have probably never seen before. Coloured cockatoos, rainbow lorakeets, galahs and other exotic birds chatter and trill in the overhead branches.

During balmy summer evenings, the park becomes the venue for all manner of entertainment. The Perth Festival takes place in January/February, giving everyone the chance to experience world cinema and performances by international theatre companies. Laden with picnic baskets, rugs and bottles of wine, locals gather early to find a good spot on the grass.

It would be easy to spend a whole holiday in and around Perth, but having travelled halfway around the world, it would be a shame not to get down to the south coast and experience the majesty of the Karri and Tingle Forests. Karri is the third tallest tree in the world, reaching to 90 metres.

A treetop walk has been constructed in the Valley of the Giants, which takes visitors high above the forest floor. Here you catch sight of birds with wonderful names like red-winged fairywren, white-breasted robin and golden whistler. Down below, creatures called quokkas and quendas (southern brown bandicoot), brushtail possums and motorbike frogs live amongst plants whose origins can be traced back 65 million years. This landscape is unique to South Western Australia, and for anyone even vaguely interested in nature, it is a paradise.

Those with a good head for heights can climb one of the Fire Lookout Trees. The Gloucester Tree near Pemberton is 61m high and has metal spikes hammered into it, enabling a climber to reach the summit and check for forest fires. At the top there is a small platform, which sways as the wind blows.

Any amount of time could be spent travelling around the South West of Australia. It is a vast country with long distances between particular places of interest, but its very emptiness is also part of what makes it so special.