Trek across the Border at the Marble Arch Caves Geopark 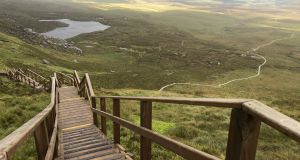 I’ve only come lately to the intriguing little wonderland that nestles quietly between Cuilcagh Mountain and Lough MacNean, in the borderlands of Fermanagh-Cavan. It’s a place of white-thorned hillocks, lakes and forests, fascinating wildlife and limestone escarpments; here, rivers “sink” and are “swallowed” out of sight, and the stony calling cards of prehistory litter the landscape.

There is as much to attract and fascinate below this land as above it, and that is nowhere better illustrated than in the truly stunning Marble Arch Caves and Visitor Centre. And, above ground, the deep chasms and holes and rips in the land, and great stones reposing on silent limestone pavements, have created a sacred and valued space within which our ancestors clearly wished to be interred.

This is nowhere more in evidence than in the Cavan Burren Park, about 10km from Marble Arch; here the efforts of our early farmer ancestors to honour their dead are all around and are clearly described, as is the recent and ancient geology of the area.

I’ve been to both these places and love them. However, I was back here on a showery late day to experience another special reason to be in the area – what’s been dubbed the “Stairway to Heaven”. So, for me, instead of the 154-step boardwalk down into the bowels of the earth at Marble Arch Caves, it was to be up the Cuilcagh Boardwalk, a construction of wooden walkways, steps and handrails leading to an enclosed viewing platform below the edge of the Cuilcagh Mountain summit plateau.

The boardwalk was built to protect the fragile mountain environment by the Unesco-endorsed Marble Arch Caves Geopark. This is the first cross-border geopark in the world, encompassing as it does more than 40 publicly accessible sites in Fermanagh and Cavan. The boardwalk is extremely popular but has been criticised by some from an aesthetic point of view.

The first section of the walk is along a rough track through rolling blanket bog. But after that, and once I was on the boardwalk, pace and excitement both quickened as the walkway drew me ever closer to the dramatic escarpments of the northern edge of the Cuilcagh summit. These escarpments have their own story, one of ancient seas and silting estuaries, and of infinitely more recent icecaps and local mountain glaciers.

My aerobics were seriously tested as the boardwalk became a series of steep hand-railed staircases, but soon it happily deposited me – by now a definite fan – on the viewing platform for a lovely long hangout and an opportunity to take in the beauty of south Fermanagh.

An early start had me alone on the walkway. But all that changed on the way down as a procession of Sunday day-trippers came on, all of us now battling a heavy squall shower. And though hungry and wet, I passed up on another serious nearby attraction: Neven Maguire’s cosy and tasty haute cuisine in Blacklion.