How to make friends while travelling alone

Solo travel is increasing in popularity, but you don’t have to be on your own all the time 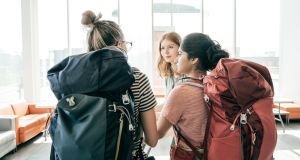 Hostels are perhaps the quintessential way for young people to travel, but you will find all types of ages and backgrounds in one. Photograph: iStock

Experiencing another culture on your own terms, at your own pace, with a budget of your own choosing can be an incredibly rewarding and insightful adventure. But while some may find such a journey liberating, others might worry about safety or a period of solitude in a strange, unfamiliar place. Humans, after all, are social animals.

Prospective solo travellers should know that, despite its label, solo travel does not have to mean you are alone all the time. There are local communities to safely interact with, as well as fellow globe-trotters in a similar position.

A 2016 report from travel research company Phocuswright found that a whopping 72 per cent of hostel guests in the United States were travelling alone. Airbnb saw similar a trend in its data, with cities like Ho Chi Minh City in Vietnam, Cologne in Germany, and Johannesburg in South Africa experiencing more than a 130 per cent increase in individual bookings in 2016.

With solo travelling growing in popularity, it’s clear there are options to socialise with other travellers — it’s just a matter of putting yourself in the right position to do so. Here are some tactics you can use to meet and befriend people abroad, from tried-and-true methods to innovative new apps and technology.

The word free is in quotations because, assuming your tour guide is at least half-decent, you should tip them at the end (many earn the majority of their income on commission). But these walking tours can be worth every penny. Not only will the guide give you an informed and hopefully entertaining view of the locale, but you’ll have a chance to interact with other tourists and possibly come away with a new friend.

The leisurely pace in between stops gives you the opportunity to chat with fellow tour-goers, who you may discover are also travelling alone or as part of a small group they are willing to let you join. Prominent cities often have multiple specialised tours — street art or local cuisine, for example — which provide additional chances to meet people and further learn about the place hosting you.

Several tour companies, like Sandeman’s New Europe or Free Tours by Foot, have outposts in popular cities and are generally safe options for the solo traveller. But don’t count out smaller or independent tour companies that may be better tailored to specific destinations. Visit the company website and read reviews left by travellers to make sure everything checks out. You can also look at ratings on separate websites like TripAdvisor for a more comprehensive view.

If you are staying in a hostel, the staff often has relationships with tour companies in the city. A hotel receptionist or concierge would also have recommendations.

Use Airbnb to go on unique experiences hosted by locals

Airbnb may be known more for its lodging arrangements, but it also wants to give you something to do at your destination. Airbnb Experiences connects travellers with local guides who lead guests on paid activities ranging from city tours to bar crawls and hobby and skill classes. Launched in late 2016, Experiences quickly became a popular feature.

So what is the appeal? Similar to walking tours, Airbnb Experiences can be a fun way to mingle with fellow sightseers while gaining firsthand knowledge from experienced locals. And while you do have to pay upfront, costs usually cover expenses like transportation, food, drinks or equipment. Each booking page includes information from the host on what items they will provide, as well as what items you should bring, like activity-specific clothing or extra cash (for souvenirs, for example).

Since Experiences is embedded on the standard Airbnb platform, you’ll want to show the same caution when booking activities as you would with booking housing. Make sure to read through the description and photos carefully and pay attention to the Experience’s rating and reviews (Airbnb has neat little trophies visible on the page if the Experience has been rated five stars by a certain number of people.) If you have any questions or concerns, Airbnb will put you in touch with the host through its messaging system even if you have not booked the activity yet.

Prefer to cut out the middleman and connect directly with other travellers? Try your hand at the crop of social networking apps specifically designed for travel. Travello, free on iOS and Android, allows you to discover other travellers nearby, match itineraries for planned trips, and join groups based on similar interests. You can also create a feed by posting photos and updates.

Tourlina, also free on iOS and Android, is exclusively for women and operates a lot like a dating app by swiping on potential travel companions with similar itineraries and timing. Women can also use the dating app Bumble’s BFF feature to meet platonic companions in the area. Other social media apps are full of options, with region-specific Facebook groups and subreddits to engage with travellers, expats, and locals in your destination of choice.

As with any first encounter brokered through social media, use caution when meeting people in real life. Meet in public spaces and consider video chatting beforehand. Travello also has a block/report feature if anyone conducts themselves inappropriately, resulting in an immediate ban from the app.

In a world of hospitable hotels and authentic Airbnbs, why do travellers elect to stay in hostels? Two reasons, really: Hostels are cheap, and sociable. You will find college-esque dormitories with common lounge rooms and kitchens, and sometimes a bar or cafe.

It is an ideal environment to meet other travellers, and hostel staff are well aware of this — some will lead city tours or pub crawls designed to foster interaction between hostel mates. Others might host game nights in the common room or arrange family dinners.

Popular booking sites include Hostelworld, Hostelz, Hostels.com, and Hostelbookers, and all feature reviews and detailed information about available amenities and each hostel’s location. Novice solo travellers may want to consider staying near the city centre for a convenient and safe option. During your research, pay attention to which hostels struck a chord with solo travellers in particular — those likely facilitate group activities and also provide good security for individuals. Female solo travellers can also often stay in female-only dorms.

Hostels are perhaps the quintessential way for young people to travel, but you will find all types of ages and backgrounds in one. And though the image of the lone backpacker bouncing from hostel to hostel has endured for decades, the data suggests the trend is more popular than ever.