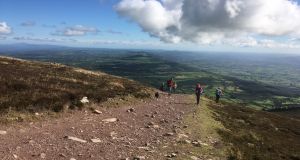 The peak has a huge burial cairn reputed to contain the entrance to the Celtic underworld.

It is a strangely evocative mountain. Contrasting with its bulkier and more angular neighbours, the Comeraghs and Galtees, Slievenamon is an isolated eminence that overlooks the Tipperary countryside like a benevolent grandmother. Alone in song and location, Slievenamon is the place where Co Tipperary secretes its soul. With sensuously feminine shoulders that curve gently to an expansive summit plateau, this solitary peak provides much to justify its ancient title: “Mountain of Women”.

Rambling up the enclosed lane from the inadequate roadside parking, I find the mountain is, as usual, busy with recreationalists – from power-walkers to strollers. Gaining open mountainside, I ascend a broad track.

About halfway up, I turn, as is my custom, to gaze upon the forlorn, skeletal remains of Kilcash Castle, once a great stronghold of the Ormond Butlers. The lament for the fall of this great house was once known to every Irish schoolchild by the opening lines “Cad a dhéanfaimid feasta gan adhmad?”

The stony track now trundles over a low rise and then to the summit. The going is never difficult, but is invariably demanding on the lungs. Surprisingly for such a salient peak, there is no cross adorning the top (721m), but, as compensation, there is a huge burial cairn reputed to contain the entrance to the Celtic underworld.

A depression in the rocks is known locally as Fionn MacCumhail’s seat. From this perch, he watched candidates for his hand in marriage race to the summit. Legend has it he cheated and helped his favourite to prevail. Unimpressed by such devotion, she soon after eloped, thereby creating the material for the tragic melodrama of Diarmuid and Gráinne.

The man who is, however, most associated with Slievenamon is Charles Kickham, who lived in the village of Mullinahone, which lies in the mountain’s northern shadow. Rejecting parliamentary politics at a young age, Kickham joined the Fenians. On August 15th, 1863, despite suffering multiple health problems, he climbed laboriously to Slievenamon summit to address a crowd of a thousand Fenians. It was probably worth the effort, since Kickham told his audience what they wanted to hear, declaring that words alone would be useless in the struggle for freedom.

It isn’t for this that Kickham is most remembered – it is as an author and songwriter, particularly for his ballad of Slievenamon which has since been adopted as the unofficial anthem of Tipperary.

I could return by my route of ascent, but instead I strike out west across the heathery mountainside. Descending quite rapidly until the moorland terrain levels out, I soon after go upwards again.

After about 2.5km, Killusty Cross appears directly ahead. This was erected for the 1950 Holy Year as part of a rash of hilltop cross building. Here I enjoy extensive views over the Suir Valley and Clonmel. Beyond, the peaks of the Knockmealdown and Galtee mountains stand shoulder to shoulder like a great defensive army.

Moving west on a track that now descends, I reach a forest edge. Here I continue left on an undulating, stony track that eventually crosses a small ravine before continuing to the enclosed lane leading to my parking place, where I reflect that today was mostly spent “Alone, all alone”.

Start/finish: From Clonmel follow the N76 and branch left for Ballypatrick after about 12km. Turn right in Ballypatrick and follow signs for Slievenamon.

Suitability: The Kilcash track is suitable for those of moderate fitness. On the extended circuit, the terrain crosses featureless uplands with sometimes disagreeable heather underfoot, so you need to be reasonably fit.