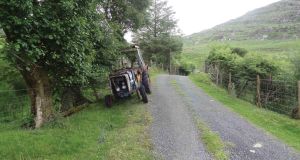 Medals and certificates should be waiting at the end of this route! They will seem well deserved after two hard climbs in the middle of a cycle that meanders over the Cork border and back again into Kerry on a mettle-testing expedition that will try even the most experienced cyclists.

The reward is a countryside full of character that almost feels unexplored, and most certainly will not be overly busy with either bicycle or motor traffic.

This route begins in Kenmare, where there should be ample parking in the town. There is also a public car park opposite Kenmare Holy Cross Church just off the main square.

Leave Kenmare and head southwards on the N71. Cross over Our Lady’s Bridge and follow signposts for Glengarriff along a rolling road for about 10km. Just before reaching the picturesque village of Bonane, follow a signpost to the left for the Priest’s Leap. Shortly after take a right at a fork on the road, again well signposted for the Priest’s Leap.

This road is a distinct change from the previous one, and although evenly surfaced is narrower and has a grassy centre. From here the gradual ascent of the Priest’s Leap begins, with pleasant farmland and countryside to admire on both sides of the road. The area is said to have gotten its unusual place name after a priest made a miraculous leap from here while being pursued by English soldiers.

After a small bridge the severity of the ascent changes and very noticeably so. For the next 3.5km the climb rises to 17 per cent in parts, with only one reprieve along the way where you can comfortably stop for a moment and catch your breath. Do not be surprised if some of the climb requires walking.

The summit appears after 16.5km of cycling, with views of Bantry Bay and Whiddy Island in the distance on a clear day.

As you begin your descent you will cross the border into Co Cork. The next 6km of descent to Coomhola will be a welcome relief and a respite for the legs. But it is quite technical, with some steep sections, so caution is advised to keep close control of your brakes.

You will reach Coomhola Bridge with about 23km on the clock. This is a good place to stop and take on some food and liquid, and reflect on having just completed the hardest part of today’s cycle.

When ready to head off again on the opposite side of the bridge, take an immediate left following the signpost for Borlin. If there is an opportunity to get lost on this route it is here as there are signposts highlighting bike trails in many directions. So take a moment to make sure you are following the right one.

The next 7.5km begins the gradual ascent up towards the Borlin Valley, and, unlike the previous climb of the day, this one is a lot more forgiving as it eases you gently into a steady gradient, with remarkable views of the Borlin Valley to your left.

The summit is visible high up to your left for a long time and looks quite daunting at first, but it gets nearer with every turn of the pedals and you will reach the summit at the 37.5km mark, with panoramic views ahead and behind.

For the next 10km a feeling of elation will accompany you on a stunning descent back into Co Kerry and Kilgarvan. The village will be a welcome sight as you reach a T-junction and take a left onto the R569 in the direction of Kenmare.

In Kilgarvan there is a petrol station with a shop. The remainder of this cycle continues along the R569 and back towards Kenmare on well-surfaced roads, which should feel easier on the legs despite some tiredness from the day’s efforts.

You will reach Kenmare having completed 65km. Take a right down through the town and back again to the car park.

Please note that some areas of the route, particularly on the descent of the Priest’s Leap, require full attention as the surface is less than perfect in parts. Be sure to bring provisions as there is no planned stop at a shop or cafe en route.

Edited from Cycling Kerry – Great Road Routes by Donnacha Clifford and David Elton (The Collins Press, €14.99). Available from bookshops and online from collinspress.ie