What to do when you can’t get to the Skelligs

Boat cancelled due to bad weather? Or can’t get a ticket? Don’t fret, there are plenty of alternatives 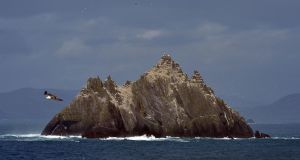 Small Skellig has one of the largest colony of gannets in the world. Photograph: David Sleator

If you’ve turned up in Portmagee and your boat to the Skelligs is not going out, blame the Office of Public Works, not the boatmen. There’s an OPW guide living out at Skellig Michael, and one of his jobs is to walk down to the landing from his hut every morning and assess the swell. If the swell at the landing is too high for disembarking, the boats don’t go.

There’s no accounting for the weather or the sea in this part of Kerry – what looks flat calm from the mainland can be “filling in” or dirty, as they say around here. On a good day, you’ll know all about the swell when you’re out there, 13km offshore. It takes a hardy stomach to cope with a bad one.

Only 15 boats have permits to land on the island, carrying a maximum of 12 passengers each per day. Tickets book out months in advance, making it extremely difficult for operators to reschedule sailings that have had to be cancelled due to bad weather.

But this part of Kerry is packed with historical and archaeological wonders and sites, islands steeped in legend and history, so if your Skelligs trip does get called off, don’t fret; there are plenty of alternative excursions in the area.

Look on the bright side: as a bonus, you won’t have to painstakingly inch your way up 618 steps, avoiding hundreds of other visitors, many of them in Jedi robes and ready to whip their toy light-sabres from their rucksacks at a moment’s notice to re-enact their favourite Star Wars moment behind the Beehive huts. Yep, seriously.

There is no better way to appreciate the magnificence of the landscape than from the sea, and several boat operators continue to sail, even when the Skelligs route is closed.

Every licensed boat that does the morning trip to the Skelligs does afternoon eco-tours, also known as non-landing trips. It may feel like second best, but you will get to appreciate the Skelligs in a very different way.

Unlike the morning trips, the boats are not under pressure to get to the landing at a certain time. If seals are basking on the rocks under Little Skellig, or a minke whale or a pod of dolphins appears, the skipper can let the boat idle for a few minutes to allow passengers enjoy this rare close encounter with wildlife.

One such operator is Fionán Murphy of FM Marine Services in Valentia, who purpose-built his boat, Skellig Walker, three years ago when the new licences were issued. With seating for 12 inside and out, the cabin is like something from a film set.

The brilliant thing about these trips is you circumnavigate Skellig Michael in its entirety. One of the true wonders visible from the other side is the road, snaking its way at impossible angles around the island. You’ll also see the lower lighthouse, which was still manned by keepers until the 1990s: the upper lighthouse, devastatingly haunting in its ruined isolation; and the eastern landing used by the monks.

More than anything, you will appreciate the wonder and immensity of this marine slate mountain, its impossible, inhospitable cliffs and ridges, and wonder how did they? How could they? Why did they? These are the unanswerable questions of the Skelligs.

The best alternative to the Skelligs has to be Bull Rock, and Des O’ Shea of Skellig Coast Discovery can take you out – still weather permitting mind you – in his purpose-built Rib. Leaving from the easily accessible Wavecrest caravan park in Caherdaniel, O’Shea takes passengers out to this massive marine mountain 8km offshore, part of the chain of rocks off Dursey Island at the edge of the Beara peninsula called the Bull, the Cow and the Calf.

Renowned for the huge sea-arch running through the rock, the Bull also has mythological significance – reputed to be the home of Lord Duinn, the lord of the dead, it was believed that on death, souls passed through the arch on the way to the other world.

On a good day, O’Shea will take his boat through the arch, and it’s uncanny; it does somehow feel like the passage between one world and the next as you leave the peninsulas of Beara and Ivereagh behind you, and are confronted with the immensity of the open Atlantic.

About half the height of the Skelligs, Bull Rock rises to 91m above sea level. The sides of the island are steep, rugged cliffs. The lighthouse was built here in 1882. Using explosives, the miners blasted and cut 300 steps into the rock, built an octagonal lighthouse tower, keepers’ dwellings, an oil-gasworks for the light, steps, landings, derricks and hoists. In 1889, the light shone out from the Bull for the first time. Its beam is still visible at night, sweeping the sea and the sky.

Dolphins and whales are plentiful in this part of Kerry, and pods of wild dolphins have been following O’Shea’s boat for almost 10 years. Seeing a dolphin rise from the water to jump beside the boat is like a jolt of joy, an electric shock of delight to the heart.

Your chances of getting to the Bull are dependent on the swell and the wind direction – if the sea is too wild to get out, O’Shea will take the boat on a wildlife tour down Kenmare Bay, stopping at Helen’s bar in Kilmacallogue. Just being out on the water here between the mountains of Beara and Ivereagh is a destination in itself; the ever-shifting light paints the sea indigo one minute, shining silver the next, lulling you into a torpor. Disembarking is like leaving a world of pure magic behind.

Also operating on the Kenmare River, offering dolphin and seal watching trips, is Noel Donnelly, whose business Sunfish Explorer is based at the Parknasilla hotel outside Sneem. He does Rib trips and runs a fleet of kayaks for those who want to experience the water. Donnelly fished for years before turning his attention to tourism, and like Des O’ Shea, is a team member of the local lifeboat unit.

At Derrynane harbour, Helen Wilson of Derrynane Sea Sports offers a range of opportunities to get out on the water, from windsurfing to paddleboarding, and you can sail from here too.

At Bunavalla Pier, close to Derrynane, John O’Shea is the sole operator to the Skelligs going from Caherdaniel. As well as landing trips, O’Shea does eco tours of the Skelligs in the afternoon, leaving Bunavalla at 3pm. It takes 40 minutes to get to the Skelligs from Portmagee; from Derrynane it takes two hours. It’s a breathtaking trip, as you cruise past the islands of Deenish and Scariff, on out past the fearsome beauty of Hogs Head and Bolus Head until you are on the open Atlantic and the Skelligs gradually reveal themselves. If you have a day where the cloud hangs low and the mist is shapeshifting, nearly all the better, it makes everything even more magical.

Skelligs boatmen are licensed by the OPW to run between April and end of September; eco tours are available until end of October. See heritageireland.ie for a list of boatmen.