Walk for the Weekend: Feast for the senses as lakes and mature trees form a stunning background at Glenstal Abbey, Murroe, Co Limerick 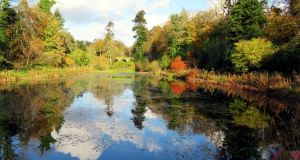 If you are looking for a peaceful and visually stimulating ramble, you will hardly do better than the 6km walk around the grounds of Glenstal Abbey. Here the original owners (the Barringtons), An Taisce and the Benedictine Monks have created a landscape that delights at almost every turn.

As you walk up the main avenue towards the Abbey you pass ancient oak trees, descendants of the primeval oaks that once covered the country.

Opposite the first of five artificial lakes is the great bulk of the “Ilchester Oak”, under which Mary, the daughter of Standish O’Grady, dallied with the son of the Earl of Ilchester; an affair which, after some vicissitudes, led to a happy marriage.

Around a bend in the avenue, Glenstal Castle comes into view. Built in the early 19th century in the style of a Norman fortress, the castle is an impressive sight. The walk leads past it through diverse woodland, part of the thousands of trees planted by the monks.

On your left you will come to the Monastic Graveyard, beside which a path leads into “The Lady Garden”, now being restored.

On one side are 16 silver birch trees commemorating the executed leaders of the Easter Rising. An extra one has been added in memory of Winnie Barrington, who was accidentally killed in an IRA ambush in Newport in1921.

As a result, the Barringtons moved to their English estates and the domain was bought by a local priest who invited Benedictines from Belgium to come to Glenstal.

The path then follows the shore of a long narrow lake. The view from the southern end of the lake is splendid, with the surrounding multi-hued trees reflected in its still waters. At the far end, a multi-arched viaduct built by William Le Fanu, the famous railway engineer, adds a dramatic counterpoint to the scene.

Continuing around the lake and on to the main path leads to a terraced walled garden laid out in the Italian style. Walled gardens were initially built as fortifications by settlers during the Cromwellian and Williamite wars, and were continued for more practical purposes.

Restoration work began in the garden in the 1980s, with every effort made to use plants that would have been found there in the 17th century. The second and third terraces are planted with flora mentioned in the Bible.

Returning to the Abbey, keep left to walk down the wooded “back” avenue to the main road which leads into the village of Murroe and the main gates.

However, I turned back up the avenue to visit the Abbey and await vespers at 6pm. The monks are noted for their Gregorian chant used in this daily service, which is open to the public.

It was well worth the wait. The melodious chants rang out clear in the theatrical atmosphere of the darkened church. They stayed in my head as I walked back down the main avenue, the ancient oaks still showing the marvellous intricacy of their branches against the night sky.

Glenstal Abbey, Co Limerick
Start & Finish The front gates of the Abbey, just north of the village of Murroe.
How to get there: Murroe is on the R 506, 10km southwest of Junction 28 on the M7.
Time Two to three hours; vespers at 6pm
Distance 6km
Suitability Easy