Back to the future: Japan enters new era trying to escape its past 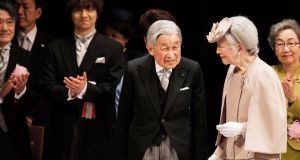 Just before Christmas last year, Japan’s ailing Emperor Akihito (85) celebrated his final birthday as head of the world’s oldest hereditary monarchy on a note of contentment. His voice cracking with emotion, Akihito said he felt “deep comfort” when he recalled that his 30 years on the Chrysanthemum Throne had been free of war.

That peace was thanks largely to the war-renouncing constitution, which has kept Japan out of foreign entanglements since 1945. But Akihito’s reign, known as the Heisei era, which officially ends with his abdication at the end of this month, had its share of trauma. Not least has been a steep erosion of national confidence and the fear among many in Japan that the country’s best years are over.

Heisei began in January 1989 with a hubristic swagger. Cars and cool electronic gadgets poured out of Japan’s factories

The raw facts of the Heisei era seem to reinforce this concern. After decades of strong growth, Japan’s economic juggernaut slowed to a crawl, particularly between 1997-2012 when it grew just 0.6 per cent a year (for a quarter of a century during the post-war boom years, average annual growth had topped 10 per cent).

A collapsing asset bubble wiped out a generation of wealth: commercial land prices in Tokyo and five other major cities plummeted by 87 per cent from their peak. Public debt spiralled, surpassing a quadrillion yen in 2013, or more than twice Japan’s gross domestic product. No fewer than 17 leaders rotated through the doors of the prime minister’s office.

Reinforcing the sense of national malaise as Japan takes stock of the Heisei era is the ageing, shrinking population: in 2017, nearly 400,000 more people died in Japan than were born.

That’s certainly not the whole picture, and in some ways the story of Japan since 2010 is its resilience. But Heisei began in January 1989 with a hubristic swagger. Cars and cool electronic gadgets poured out of Japan’s factories. Its banks gorged on swelling asset and property prices to rival the world’s largest financial institutions. As 1989 ended, the Nikkei Stock Average hit a record high. With America in decline, some rashly predicted Japan would become the world’s greatest economic power.

Of course, it was not to be. The party soured in the early 1990s and stagnation followed. In 2010, Japan lost its place as the world’s second largest economy to China, a title it had held since 1968 when it overtook West Germany. Emperor Akihito’s reign was also studded with natural disasters. An earthquake in 1995 killed more than 6,000 people and levelled much of Kobe city; another in 2011 left 19,000 people dead or missing along the east coast, destroyed infrastructure worth 10 per cent of GDP and triggered the world’s worst nuclear crisis since Chernobyl in 1986.

In hindsight, these “lost decades”, as they were dubbed, obscured Japan’s underlying strengths. Throughout, unemployment never rose above 6 per cent. Income was better managed than many Western economies: America has three times more poor and rich people. Crime fell to historic lows. Reconstruction was comfortably financed from Japan’s deep pool of savings. The nation’s banks, steeled by the bad debt crisis, weathered the global financial crash of 2008/9 better than elsewhere and the economy rebounded faster. Japan has since outperformed its major capitalist rivals in per-capita income growth. National decline rarely looked this good.

The unlikely political cheerleader for Japan’s late-Heisei recovery is prime minister Shinzo Abe, who crashed and burned during his first term in office in 2006-2007. He returned in December 2012 with an inspiring message: “Japan is back.” In one of his first major international speeches the following year Abe pledged to turn around the $5 trillion economy. “Keep counting on my country,” he said. “Japan is not, and will never be, a tier-two country.”

For years, Japanese governments had seemed content to manage deflation. Now Abe was calling a halt with bold plans for fiscal and monetary reform – including a series of large stimulus packages and a vast expansion in the country’s money supply. That robust interventionism won the support of many who seemed content to turn a blind eye to his political hawkishness and right-wing take on Japan’s past.

To some, this all looked like nostalgia for Japan’s big-power status. As he coasts towards November, when he will become the longest-serving prime minister in Japan’s history, however, Abe can point to an impressive list of banner figures. The economy is enjoying its longest expansion since the end of the second World War. Unemployment is at a 26-year low. Japan has net external assets of about $3 trillion, making it the world’s largest creditor nation. Its corporations are perched on a mountain of retained earnings.

Moreover, after years as an apparent economic laggard, Japan looks ahead of the pack. A decade before European and American governments experimented with zero interest rates and asset purchases (“quantitative easing”) to prevent the unravelling of their economies in 2008, Japan was pioneering these techniques. Other rich countries are also struggling with weak demand, rising public debt and ageing workforces, and looking to Japan – a country once considered a basket case – for lessons.

Abe’s pledges to expand economic growth and return his nation to first-tier status are hampered, however, by its grim demographics. Government projections say the labour force could collapse by 20 per cent before 2040, a decline, notes Glen S Fukushima, a senior fellow at the Washington-based think tank Center for American Progress that was predicted as far back as the 1970s. “Not much was done to address it.”

Emperor Akihito retires with his country in better health, then, than he might have hoped a decade ago

The economy has responded by sucking millions of women and elderly people into the workforce, which hit a record last year of nearly 67 million. But what will Japan do once that finite pool has dried up? Abe has surprised some with a solution largely shunned for decades: immigration. This month, visa rules will be relaxed to allow in more foreign workers. Yet, the published figures – 345,000 workers in the next five years – are a drop in the bucket.

Efforts to raise the birthrate, meanwhile, would require a revolution of employment practices at Japan’s corporations, with their punishing demands on the baby-making population. In any case, conservatives value homogeneity and social harmony too much to embrace the multiculturalism of Europe, says Yoko Takeda of Mitsubishi Research Institute, a think tank. That leaves machines: robots and artificial intelligence will be pressed into service. By 2030, she predicts, Japan may even have a labour surplus.

Emperor Akihito retires with his country in better health, then, than he might have hoped a decade ago. But the Reiwa era, under his son Naruhito, opens on May 1st in a world dramatically reshaped by the rise of China. As Japan’s share of the global economy has shrunk, its neighbour’s has grown: for most of Heisei, China’s GDP expanded by more than 9 per cent a year, mirroring Japan’s “miracle” years. And China gives the impression of preparing for war: it now spends more on its military than any other country except the United States, with whom its maritime ambitions put it on a collision course.

Japan’s response to China’s expansion under Abe has been to prepare for the worst, with a string of record-breaking military budgets and a “reinterpretation” of the pacifist constitution, expanding its military role abroad. The two countries have threatened to square off over a clump of rocks in the East China Sea that Japan owns but China claims. The Abe government’s rejection of what his supporters call “apology diplomacy” for the nation’s wartime misdeeds against China in the 1930s and 1940s have complicated what was already a fractious relationship.

The historic precedents for a peaceful transition are not encouraging. Most cases of rising and declining powers have ended in conflict. Indeed, it may have been this fear that Akihito alluded to in his birthday address. Moreover, as Abe prepares to shed the remains of Japan’s post-war pacifism, there is little political brake on his ruling Liberal Democratic Party: a brief experiment with multi-party democracy in 2009-2012 has faded and Japan’s ageing voters seem little inclined to push for radical change.

Will people look back at Heisei nostalgically as the calm before the storm “or think of it as an era of lost opportunities, or a time of stagnation before new dynamism?” wonders Tessa Morris-Suzuki, professor Emerita of Japanese History at the Australian National University. “It all depends on how Reiwa turns out,” she says. Japan’s government has translated the era’s name as “beautiful harmony”. Only time will tell if it lives to that billing.