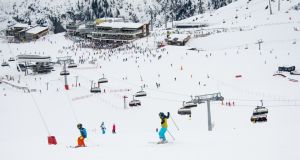 Like an Alpine field of dreams, the glittering, pristine snow lies ready on the slopes of the Paznaun Valley, 2,100m above sea level. The piste is prepared, but no one in the Austrian ski resort of Ischgl knows when the first skiers will come.

Posters around town advertise the “Winter Opening” for last Thursday night, but the empty streets are a pale echo of this time last year when 21,000 people swarmed in for a spectacular “top of the mountain” opening event with rock band Seeed.

A year on, Ischgl is notorious for the events of mid-March, when Covid-19 ran rampant through the village – in particular the sweaty après-ski hotels and bars. Thousands of holidaymakers from Iceland to Israel returning from Ischgl tested positive. At least 32 are known to have died, and half of the 1,640 village residents have tested positive for the virus antibodies. Andreas Steibl, tourism director in Ischgl, says the town — which lives from winter sport visitors — has learned its lesson. It has invested more than €700,000 in protection measures, going “far beyond the government’s regulations”, and enjoyed a summer season without any infection clusters.

“We are responsible hosts,” he says. “We want to continue this approach and do everything we can to afford maximum protection and give our guests a safe and relaxing holiday experience.”

Not everyone is convinced that this year’s European ski season can kick off as normal. Italy’s prime minister Giuseppe Conte forced the debate into the open on Tuesday, urging people to avoid the pistes in his country’s ski regions during the Christmas holidays.

Sadly it doesn’t look at present as if we will find an easy solution, but we will try again

His call for a co-ordinated European response was followed, hours later, by support from French president Emmanuel Macron. He signalled that popular French slopes would be off-limits until 2021 at least, only re-opening in January if conditions were “favourable”.

Responding to calls from Conte and Macron for consultation with EU partners, Chancellor Angela Merkel agreed on Thursday that a more modest season, starting mid-January, was more likely.

“Listening to signals emerging from Austria,” she added, “sadly it doesn’t look at present as if we will find an easy solution, but we will try again.”

Merkel’s remarks followed a warning by Bavarian state premier Markus Söder that a return to crowded ski lifts and packed après-ski bars could see careless winter sport lovers “thwart all the efforts made by the population at large”.

Hours later, Austria’s tourism minister Elisabeth Köstinger struggled to contain her fury on Austria’s Thursday evening television news. Vienna didn’t tell Berlin whether to close its schools, or Paris to re-open the Louvre, she said, and they should stay out of Austrian winter sport affairs.

With Austria in its second lockdown — schools and all but essential shops are closed — Köstinger said that the details of the looming ski season will be dependent on infection data, with public health as the greatest priority.

“The last months were a great challenge for us all, and it’s important people are able to recover and win back some head space,” she told ORF television’s evening news. “You cannot get the coronavirus on the ski piste. We know from the first months of the pandemic it was more what happened after, and we are ruling that out this year.”

Ischgl tourism officials say all public areas will be disinfected daily, killing 99 per cent of viruses and bacteria. It has purchased 600,000 masks, now obligatory in all ski lifts, with entrance areas now organised to prevent clusters and allow for social distancing.

Critics point out that the country’s ski lift operators – with an influence in some regions similar to that of Irish vintners – have refused to reduce the maximum capacity of ski lifts. With no limits imposed on the sale of alcohol, or early closing in bars, it is unclear how resorts can prevent euphoric visitors holding spontaneous après-ski parties.

Many Austrian medical experts are alarmed by the push to re-open the slopes, particularly given the 30,000 people who are injured each year and require hospital care. Dr Bernd Lamprecht, of the Linz University Clinic, says the country’s clinics are already facing Covid-19 capacity issues as the flu season begins. “We could really do without unnecessary, avoidable injuries,” he told ORF television.

If that is what the EU really wants, it will have to pay for it

The debate may yet soften in Austria if a mass test of the entire population – scheduled for the first two weeks in December – brings good news. But Austria’s powerful tourism sector is used to resisting outside influence – coloured by local economic and political realities. Roughly a quarter of all tourism bookings in Austria are linked to the ski season, and winter sport visitors contribute four per cent to the Alpine republic’s gross domestic product.

Larger economies such as France and Germany can live without skiers and snow boarders, say officials in Vienna, but in a nation of 9 million people, more than 230,000 jobs depend on the ski season.

In a first volley, Austrian finance minister Gernot Blümel warned this week that forcing an EU-wide ban and writing off the 2020-2021 season would mean losses of €2 billion. “If that is what the EU really wants, it will have to pay for it,” said Blümel. Chancellor Sebastian Kurz followed up, likening the risks associated with a ski lift to “someone being on public transport”.

Mr Günter Platter, the ÖVP’s powerful leader in the Alpine Tyrol region, has been a loyal ally of the industry in the ski season debate. He insists the slopes will open “as soon as the infection rate allows”, with his regional officials marking their calendars for December 19th – at the latest.

“I have a feeling that those who are speaking here have nothing to do with skiing,” said Plattner this week. The ÖVP man has been a loyal supporter of Ischgl in the past months and, as investigations continue into the resort’s super-spreader event, he insists locals did nothing wrong and that the “Ischgl bashing” has to stop.

Ischgl has never apologised, denies any responsibility and refuses to pay compensation

For Peter Kolba, lawyer and head of a local consumer group, Austria’s ski debate is symptomatic of all that went wrong in Ischgl last March. For the past eight months, the Vienna lawyer has co-ordinated class-action lawsuits against Ischgl and the Paznaun Valley.

His main claim: in the pursuit of profit, local business owners and regional officials ignored warnings from other countries that the village was a virus hotspot – and spread a public health risk across Europe and much of the western world. Some 4,000 people have joined his action, including 37 from Ireland.

“Ischgl has never apologised, denies any responsibility and refuses to pay compensation; they dispute even things an investigation report confirmed,” he says. “They are well organised and want to carry on as if nothing happened. Even talking of a campaign against them, as they do now, is a classic reversal of perpetrator and victim.”

In January, when Ischgl hopes its ski season hits top speed, Kolba will meet town officials for their first Covid-19 confrontation in court.