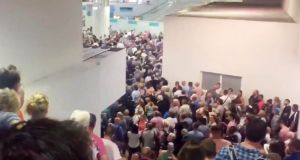 The authorities at the Algarve’s Faro Airport have defended their management of passengers through passport control after hundreds of people were forced to wait up to three hours to have their documents screened last weekend.

Passengers were left standing for hours in a hot, cramped and overcrowded concourse just ahead of passport control last Sunday evening with no explanation from airport staff about the reason for the delays.

Angry travellers took to social media to express their anger at how they had been treated at the Portuguese airport.

RTÉ presenter Brenda Donohue, who was stuck in the middle of the crowd, told The Irish Times she had never experienced anything like it.

“No one could hear any of the announcements being made about flights, the heat was stifling and there was absolutely no crowd control.”

She said it was a particularly terrible experience for older people, pregnant women and people with young children. “There were some people who were seriously panicking because it was so claustrophobic and because they were afraid they would miss their flights.”

Faro Airport is the hub for holidaymakers heading to the Algarve, which is hugely popular with Irish tourists. The airport can accommodate more than six million passengers a year, and it says that it has the ability to handle 3,000 people an hour after a €33 million expansion last year.

After reports of the problems emerged, the Irish Travel Agents Association expressed concern about the delays and called on airport authorities to address the issues at passport control.

He called on the authorities to “take measure of the situation and work effectively to solve these delays as we move into the peak season for Irish travellers”.

In response to queries from The Irish Times, the director of the airport Alberto Mota Borges said last Sunday’s delays were “a one-off situation that should not be generalised”.

He claimed that the problem occurred “within a limited time period, which coincided with a traffic peak during which, due to [Portuguese border officers’] own operational reasons, there was a slight decrease in the availability of human resources”.

He said that decrease in staff had “led to a punctual reduction of processing capacity of the border control services”.

He said that the airport would “do everything to ensure, in the context of good relations it maintains with [Portuguese border officers] that good levels of service to passengers are maintained, and that the situation does not occur again.”