On the hunt on an Irish food safari 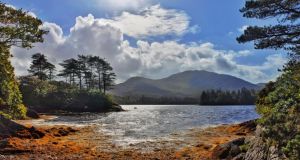 In an attempt to build a connection between the kitchen’s carefully cultivated direct supply chain of local and artisan products, and the people responsible for them, it has produced a food suppliers map for guests.

“There’s lamb stew on every day. Mr Brennan will have it no other way.”

The Mr Brennan in question is hotelier Francis, of the Park Hotel, Kenmare, and the edict is delivered via Joe Ryan, a chef at the hotel, as we watch some of the shaggy blackface mountain ewes, whose offspring will provide the meat for the stew, soaking up some spring sunshine.

It’s late April and the lambing season has just got under way in this isolated, spectacularly beautiful place. There are shiny black Dexter cattle too, cute as buttons, grazing happily on Martin O’Leary’s 1,000-acre organic hill farm on the Beara peninsula.

The flavoursome meat from these rare-breed cattle and the soon-to-be-born lambs – once they’ve had 12-18 months’ grazing on the hills – will make its way to the kitchens of the five-star Kerry hotel, where head chef James Coffey and his team will feature it in the formal dining room’s five- or seven-course tasting menu, which changes daily.

The reason we are out here, basking in the first real sunshine of the year and admiring the silver lakes and heather hills, is to road-test a food safari the hotel is considering offering to guests with an interest in food provenance and Irish farming and food production.

In an attempt to build a connection between the kitchen’s carefully cultivated direct supply chain of local and artisan products, and the people responsible for them, it has produced a food suppliers map for guests. A guided visit may be the next step.

According to Anna Marie O’Sullivan, deputy manager of the hotel, 70 per cent of the Park’s business comes from Irish guests, many of whom have a keen interest in food and want to know more about where the produce used in the diningroom comes from.

The hotel already facilitates its foreign guests who want to know more about Irish cuisine and hospitality by inviting them to eat dinner in the homes of staff members. The hotel supplies the menu – usually smoked salmon and brown bread, Irish stew and apple pie – and the host provides the hospitality. And in the autumn, chef Coffey, a keen forager, takes guests on a mushroom hunt with mycologist Bill O’Dea.

On the drive out to meet Martin O’Leary and his Dexters and sheep, I learn more about native Irish cattle breeds and imports, the ins and outs of going organic, animal husbandry and “finishing” for slaughter than I thought possible in a 20-minute journey, thanks to Joe Ryan’s enthusiasm.

And that’s before we get on to the Irish and international food scene. He records food and farming programmes on TV, he tells me, and “speed-watches them”.

Driving deep into the scenic countryside, we encounter O’Leary working with his Dexters, curious little cattle that surround us and settle their gaze upon us before venturing forth for an inquisitive sniff of the hotel’s jeep.

“There’s plenty of work in it,” O’Leary tells us of his days spent out on the land looking after his flock of 1,000 sheep and 25 Dexters, the meat from which he sells at farmers’ markets in Cork, as well as supplying the Park.

Having a standing order from the hotel “makes a big difference, you can plan ahead”, he says. “And it’s a very good outlet for the product.” In fact, the hotel takes all the stock of Ireland’s oldest breed of cattle that O’Leary can send their way.

“I couldn’t have Limousins or Charolais, all the high-end breeds, they wouldn’t survive on the terrain we have. They [the Dexter] will actually eat briars, bits of bushes, everything, and I think that’s why they taste so good as well,” O’Leary says. He now plans to expand his herd to cope with demand for the meat.

Next up, we’re heading to another part of Tuosist parish to meet Sean Dempsey, who took over the making of Knockatee Dairy raw milk cheese from Peter and Olga Ireson 18 months ago, and whose work regularly appears on the grand cheese trolley as it trundles around the dining room at the Park.

Dempsey is originally from this area but moved to the UK to work as a forensic photographer with the British armed forces. He bought some land near his family’s farm 15 years ago, and returned in 2014 to live there and run a pig farm. It’s his carefully reared pork that goes into the breakfast sausages and black pudding made by butcher Peter O’Sullivan in Sneem for the Park’s Irish breakfast.

There are currently 10 suppliers on the hotel’s food map, some of which welcome visitors

Taking us through the cheeses he makes – a Gouda-style in plain, nettle and truffle varieties, a strong Cheddar, and Kerry Blue, Dempsey reveals that it takes 300 litres of unpasteurised milk from a local herd to make 30kg of cheese. He supplies it to a few retailers, including Manning’s Emporium and the English Market, as well as local hotels and restaurants.

“The tanker pulls up at 7am and by 3pm, the cheese is made,” he says. It is only made when the cows are out at grass, and Dempsey completes the entire process himself, down to coating the cheeses in distinctive coloured wax.

It has been a fascinating morning, joining the dots between ingredients listed on a menu, and the real people behind them. There are currently 10 suppliers on the hotel’s food map, some of which welcome visitors, and a guided food safari is in the planning stages.

In the meantime, in true Park Hotel what-the-guest-wants-the-guest-gets style, personalised food tours, guided by a member of staff, can be organised by prior arrangement.

The “Dine in an Irish family home” initiative was introduced last year and has proved to be a big hit with American visitors. The hotel’s deputy manager Anna Marie O’Sullivan hosts guests at her home in Kenmare, along with her husband Jerry and 11-year-old daughter, Cliona.

The hotel’s Irish stew is delicious, that’s the main reason we host the dinners

“It’s not a new idea, it’s an old idea we’ve rejuvenated. People seem to be interested, they’re very taken with it,” she says. “I think it is something Americans are more open to than any other nationality, they love it.”

Most of the guests who book the package, which includes a three-course dinner with wine, are Americans, and many are family groups. The cost is €85 for adults and €45 for children.

The food and wine is delivered by the hotel, so there is no cooking for the host family that night. “The hotel’s Irish stew is delicious, that’s the main reason we host the dinners, we get the lovely stew and apple tart,” O’Sullivan says.

“If you have a couple coming with kids, and they are the same age as the hosts’ kids, they get a great kick out of it.”

Cliona O’Sullivan demonstrates her Irish dancing and plays traditional music for visitors, “and they love it”, her proud mother says. She has made several penpals this way, and the family are also in email contact with two American families they hosted.

Guests usually arrive at 6.30pm and stay until around 9pm or 9.30pm. “Sometimes we might walk back to the hotel with them and stop for a drink in the town,” O’Sullivan says. She had also been known to make Irish coffees to follow the meal.

John Palmer, head porter at the hotel, also welcomes hotel guests to the sheep farm where he lives with his daughter and son-in-law. Having encountered the fluffy sheep that sits astride every bed in the hotel, as well as out on the land, guests are often interested in the Kerry sheep.

Daytime visits with Palmer might involve a farm walk, helping out with the animals, and the tea and scones in the farmhouse. Genuine Irish hospitality – the foundation stones of the Park’s success.