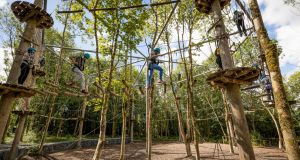 When the Irish go abroad, they sit on open-top tour buses, visit cultural highlights, and seek out hidden gems.

But at home in Ireland? We tend to stick to the traditional, tried and trusted tourist spots – in counties such as Kerry, Dublin, Galway and Wexford.

I’ve been to Kilkenny many times – usually (eight times in a row now) to see Tipperary beaten in senior hurling games. Home, Nowlan Park, a fast-food joint if time allows, home again. A quite one-dimensional (and often brutal) way to sample the delights of the county.

And it’s a pity, because Kilkenny is family-friendly heaven, and it is also why a tourism initiative called Dig a Little Deeper (visitkilkenny.ie) is hoping to show off some of Kilkenny’s hidden gems for families this summer.

Hotels along the west coast of Ireland were among the first to move from child-annoying to child-friendly – from Derry, through Claremorris, Westport and Galway, down to Killarney and Kenmare.

However, many of those have sand and sea on their doorstep. Co Kilkenny is landlocked (though probably wouldn’t object to filling in Tipperary if the opportunity arose). Regardless, hotels such as the Newpark (a 20-minute walk or more comfortable five-minute car ride from the centre of Kilkenny city) have shown how it can be done.

A magnet for weddings, and for families, it’s less a hotel and more a theme park. There is (at least what should be considered) the basic, family-friendly facilities – interconnecting rooms, games zones, babysitting service, playground, etc. And then there’s the extra mile stuff – such as a wildlife farm and nature trail at the back of the hotel.

Jewel in the crown

It is a good start if the children are entertained in the hotel, but the county is not short of fun activities within striking distance (with a sliotar, of course) of the city.

The jewel in the crown of outdoor adventure is surely Castlecomer Discovery Park, about 20km from the city. Despite being open to the public for only a decade, something new appears in the 80sq km of woodland each year. Home to an impressive 300-metre zipline, which takes the brave over the lake, the beautiful park also boosts pedal boats, orienteering trails, junior and senior adventure course, climbing wall, tree-top climbing, fairy village, archery and a coal mining exhibition. It is one of those rare places that actually caters for all age groups in a family.

Access to the park is free (the carpark is a fiver), but it can quickly add up if you arrive with a small army intent on trying everything. For budget, availability and convenience reasons, it is worth booking before you set out.

At the other side of the city, Nore Valley Park – a few minutes from The Little Mill (which is also worth a visit) – is a busy farm. Something is always happening here: animals are being fed, or a tractor and trailer is taking children for a ride, or there’s a treasure hunt underway – you get the picture. On May 5th and 7th, a Slime Factory is planned. Don’t ask, we have no idea what that means, but you know the children will love it.

Also in the surrounds of Kilkenny city is the National Reptile Zoo. Apart from the obvious, it also houses a softplay area for those who might not be enamoured looking through glass at pythons, lizards and alligators. Make sure you take note of the “Animal Encounter Zone” times, where you can embarrass yourself in front of the children by being afraid to touch a small, harmless (but scary-looking) animal.

A tourist spot worth considering, despite having children in tow, is the Smithwick’s Experience in the centre of town (sorry, “city”. Kilkenny folk get touchy about their beloved city being called a town – just ask anyone at the town hall).

The hour-long guided tour takes visitors on a room-by-room journey of the brewing process (past and present), as well as a history of the ale’s production in the county (“it’s 50 years older than Guinness,” tour guide Colm says, making it sound as if the Irish stout is part of a recent start-up).

However, that’s not what will grab your attention. Early in the tour a hologram of a monk explains why Franciscans brewed alcohol on the same site many years before John Smithwick took an interest in the land and the brewing business in the early 1700s (apparently, it was to make the water taste better, which is still a perfectly acceptable excuse to this day.) And the highlight is surely sitting in carved-out baths watching “paintings” talk to each other.

In a nutshell, for children, this is a boring story about a drink they are not allowed to taste told in a highly entertaining fashion.

And, for adults, well, what’s not to like? The tour finishes in a private bar with the option to try each of the three ales, Red, Pale and Blonde (for a modest extra charge).

Going to a restaurant with children can be akin to playing Buckaroo! You choose the location, but you just don’t know when everything will kick off. So a little understanding can go a long way (waiters armed with colouring sheets and crayons are nothing less than modern saints).

On match-days, the routine is to stick to convenient fast-food joints (such as McDonald’s, which is within walking distance of Nowlan Park). However, there are many more upmarket options in Kilkenny.

An established favourite of national food guides, Ristorante Rinuccini offers child-size portions of the main dishes – for those (and there are many) who don’t want to sit in a fancy restaurant and eat chicken nuggets and chips. The many nooks and crannies help too, for parents whose two wishes for a restaurant trip is top-quality food and that no one falls over a family member.

Nearby is Butler House, home to a beautiful walled garden, which was landscaped in 2000 by the Kilkenny Civic Trust – instantly becoming a tourist attraction. A soup kitchen was run from the site during the cholera epidemic of 1832. The soup is a little higher-spec today. And there’s crème brûlée (presumably, a modern addition to the menu).

And, just around the corner, is the elephant in the room – the castle in the centre of the city.

A castle has to work hard to impress Irish visitors. Americans are awed by anything older than their microwave; Irish people pass at least one 500-year-old castle on their way to the local supermarket.

When the Office of Public Works took over Kilkenny Castle in the late 1960s (given to the locality by the Butler family for a paltry £50), they started quite a bit behind – the entire contents had been sold in a 10-day auction prior to the second World War.

This castle – built in the 12th century – has worked very hard in recent years, and it has been a long and expensive restoration process (though entry is a very reasonable €8 for adults and €4 for students).

The large gardens and parkland (which screams picnic and puck-around on a sunny day), includes a substantial playground. Inside, the highlights – to a very untrained eye – are the state dining room, which laudably was turned into a billiards room in the 1860s. And, of course, the tapestry room, fit for artwork such as The Story of Decius Mus, which was woven from the designs of Peter Paul Rubens in the early 17th century.

Everything is polished, even the staff in the castle rooms – who are knowledgeable and happy to act as guides. Though, presumably, they are also there to make sure you don’t walk off with a 17ft by 14ft tapestry under your arm.

Why: “When I was there we had an egg hunt. They were red, yellow, green, blue and purple and were hidden in different places, like beside the go-karts and playground. It was really hard to find the golden egg – it’s in the white henhouse! And I got to feed two baby lambs, called Beyoncé and Jay-Z.”

Why: “I couldn’t go on the big zipline cause you have to be at least 12, so I did the tree-top walking. In the air. It was amazing. Next time I’m going to try archery, go canoeing on the lake, and, if it’s after my birthday, the zipline.”