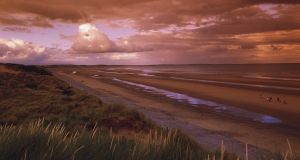 Sand dunes are the most dynamic of land systems, remaking their hills and valleys eternally like slow motion seas. Adjacent shorelines expand and contract as they erode and accumulate sandy material.

“A child’s world is fresh and new and beautiful, full of wonder and excitement. It is our misfortune that, for most of us, that clear-eyed vision, that true instinct for what is beautiful and awe-inspiring, is dimmed, and even lost, before we reach adulthood.”

It was strange to come across this quotation from Rachel Carson, the great American marine biologist and environmental campaigner, whose popular books, like The Edge of the Sea, and especially Silent Spring, are now more than half a century old, but are still enjoyed far beyond her native USA.

It was strange, because I was looking for the precise wording of a completely different (and elusive) Carson quotation, to the effect that “the seashore is a place of ever-changing landscapes, never the same from one day to the next”. But her words on children and wonder linked to these thoughts on the seashore seamlessly, to capture an experience I had just had in another context, and had not expected to be relevant to this article.

I was walking the beach at Mosney, Co Meath, with a group of asylum seekers from the nearby “direct provision” centre, tentatively trying to introduce them to the delights of the Irish natural world. It was the morning of Mayday, but the rain was spitting at us ever harder, off a cold wind that was as cold as February. The outing was rapidly threatening to become a fiasco.

But a woman from a country on the other side of the world had brought her three-year-old child with her, and he soon became our guide and inspiration. Every stone was a source of pleasure to him. As for the shells, with which the beach was richly strewn, he examined, and exclaimed at, every shape and colour, the tinier the better.

He particularly liked razor shells, using one first as a telescope, then brandishing it as a miniature scimitar. Next, his attention was caught by the sight of sanderling, the tiny wading birds that run like clockwork toys along the sea’s edge. He waved at them energetically, squealing with glee.

By the time he had found the egg case of a spotted ray, which is like a black leather wallet with a horn at each corner, and the “wash-balls” formed by the massed egg cases of whelks, he had every adult present intensely involved and curious, our sense of wonder restored, the rain forgotten.

Murlough holds a rich mosaic of habitats, superficially rather similar to Dublin’s North Bull Island, but it is an older structure by six millennia

A few days earlier, I had travelled to Murlough Nature Reserve in Co Down with Richard Nairn, to explore the pleasures that walking the seashore can offer, besides bracing air, exercise and, for the hardy, the opportunity of a swim.

Nairn knows the coastal environment intimately; he is the author of Ireland’s Coastline and co-author of the recently published Dublin Bay: Nature and History. It was he who had mentioned Carson’s thoughts on the persistent changes that are essential to the character of all coastlines.

Familiar as he is with this constant shape-shifting, Nairn was impressed by the dramatic changes, in structure and vegetation, in the period since he was a warden at Murlough 40 years ago.

The reserve is a broad peninsula made up mostly of sand dunes. It extends right across Dundrum Bay, almost closing it off from the sea at North Point. Here the tide races through a narrow channel which separates Murlough from Ballykinlar military training camp. Looking south, the beach offers one of the most dramatic views on our island, immortalised by Percy French, where the Mourne mountains so abruptly meet the sea.

Murlough holds a rich mosaic of habitats, superficially rather similar to Dublin’s North Bull Island, but it is an older structure by six millennia.

The rain of so many centuries has made the sandy soil in the most venerable areas of the reserve acidic, creating rare and specially protected zones of dune heathland. The younger dunes, closer to the sea, are home to a great variety of wildflowers, birds and 748 species (and counting) of butterflies and moths.

Left to themselves, sand dunes are the most dynamic of land systems, remaking their hills and valleys eternally like slow motion seas. Adjacent shorelines expand and contract as they alternatively erode and accumulate sandy material.

Nature is no respecter of noble rank, and the insolent mobility of sand dunes evidently proved vexing to the marquises of Downshire, one of whom built a substantial mansion on the peninsula in the 19th century. To their dismay, they found that the sea might come perilously close to their summer residence in one decade, while it could be in danger of being entombed by the dunes in the next.

So they did what people faced with similar problems have often done all over the world in recent centuries, usually creating new problems as a result. They planted exotic vegetation – sea buckthorn in this case – to “stabilise” the dunes. Very rapidly, the buckthorn came to dominate much of the landscape, excluding most native plants and animals wherever it spread (though providing some habitat for birds).

Buckthorn removal is a challenging but necessary conservation measure, and it has advanced significantly since Nairn first worked at Murlough in the 1970s, restoring considerable areas to something approaching their former condition.

The most dramatic changes we saw, however, were at the point where the dunes drop down to the beach. Storms four years ago had blown out a small mountain of sand, allowing tides to reach inside the dunes, creating periodic salt water pools in the new hollow. But you would not easily know that today, because wind and sea have already driven enough sand back into the opening to build a new embryonic dune barrier more than a metre high.

Dynamic changes like these occur most visibly in dune systems, but every tide also offers fresh surprises on rocky shores and shingle beaches. Nairn recommended a little field guide, Ireland’s Seashore, by Lucy Taylor and Emma Nickelsen, to help you understand the strange things that the sea may have placed on your path.

And he also recommended that the best way for an adult to appreciate the detail of any type beach landscape is to always go accompanied by children. A few days later, by complete coincidence, the excursion to Mosney proved his point.

Portnoo-Naran, Co Donegal (map reference for starting point: G713991): “At low tide, you can walk out to the island of Inishkeel with its early Christian church and graveyard. On the northern side of the island there are extensive rock pools at low tide, but be sure to cross back to the mainland within an hour before the tide cuts you off.”

Streedagh, Co Sligo (G636507): “Six kilometres’ walk along the beach near Grange and back behind the sand dunes looking across the inlet to the dramatic Benbulbin Mountain. Abundant fossil-bearing limestone rocks at the top of the beach. Popular with surfers because of the Atlantic rollers.”

Coral Strand, Co Galway (L630456): “At Ballyconneely, part of a complex around Mannin Bay. The “coral” that replaces sand on the beach is made of fragments of an alga called Mearl that lives offshore in the shallow waters. It traps calcium in seawater and builds hard structures that become broken up in winter storms. As you walk west towards Slyne Head, enjoy the flower-rich grasslands of the sandy machair.”

The Murrough, Co Wicklow (O317038): “This 11km shingle beach stretches from Wicklow Town to Greystones. Highlights include the rich strandline flora north of the old Newcastle railway house. The little tern colony at Kilcoole is protected by BirdWatch Ireland wardens in summer, who will give information on other birds and wildlife to see here. Watch out for otters in the lagoons inland of the railway.”