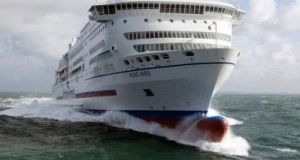 The Pont Aven ferry, which operates on the Cork to Roscoff route, has been undergoing repairs since the middle of May.

The holiday plans of thousands of Brittany Ferries customers with plans to sail from Cork to France over the coming weeks are up in the air after the company confirmed that one of its key vessels will remain out of service until the middle of June.

The Pont Aven ferry, which operates on the Cork to Roscoff route, has been undergoing repairs since the middle of May and the company said on Wednesday that the work was taking longer than anticipated.

As a result more than 6,000 people who had booked crossings on the boat from the middle of May until the middle of June are having to make alternate arrangements.

The company said its technical teams “have been working around the clock with the Damen shipyard in Brest to carry out repairs to the ship’s starboard-side steering gear”.

However. it said that “it has now become apparent that this work will take longer than initially planned, whilst replacement parts are delivered and installed, and comprehensive checks are carried out.”

Are you affected
by the cancellations?

The means the ferry will not sail again until Friday, June 14th with crossing this coming weekend and next cancelled as well as some sailing on routes to France and Spain from the UK.

The company said it would be making contact with impacted customers “over the coming days” to outline options although those options will be limited given the small number of ferry crossings on the route.

“On behalf of everyone at Brittany Ferries I would like to apologise profusely for the further delays to the return of our flagship Pont-Aven, and the disruption that this will cause to travel plans,” its chief executive Christophe Mathieu was quoted as saying.

“It’s a frustrating situation,” he added “but our priority now is to contact all customers who will be affected by this situation and to make sure that we look after them as best as we can.”

“Over the coming days the company’s customer relations teams will be contacting all customers with bookings aboard Pont-Aven for travel between now and June 14th,” the statement said.

People due to sail soonest will be contacted first. “An alternative sailing will be offered where it is available, but if no suitable alternative is available then a full refund will be offered. Due to the exceptional number of phone calls involved, affected customers are kindly requested not to call, but to wait to be contacted by Brittany Ferries.”

Last summer more than 20,000 people travelling to France with Irish Ferries had their bookings cancelled after the new WB Yeats ferry was not completed on time.

Remember Octomom? She and her 14 kids are doing well
8

Our dream home came on the market. Then a nightmare followed
9