Paschal Donohoe denies being a ‘play boy with the public purse’ 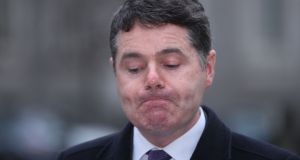 Minister for Finance Paschal Donohoe has defended his fiscal policies and denied acting like ‘a play boy with the public purse’. Photograph: Niall Carson/PA Wire.

Minister for Finance Paschal Donohoe has defended his fiscal policies and denied acting like “a play boy with the public purse”.

Mr Donohoe told Newstalk Breakfast that the Government “should have done better” when it came to the sharp rise in the cost of the National Children’s Hospital, which is being built next to St James’s Hospital in Dublin.

“I’ve always acknowledged that in the area of health expenditure (spending) has been higher than expected,” he said.

Mr Donohoe said there was a renewed focus on how health spending is managed which was why the Government had worked to sign new GP and the nurses’ contracts. “It’s a real challenge, that’s why we put in place a new mechanism to manage.”

Fianna Fáil finance spokesman Michael McGrath last week accused the Government of making unfunded commitments costing more than €4 billion with money that it simply does not have. This included the €3 billion going into the rural broadband plan, the price of the children’s hospital and a pledge to greatly incrase the point at which people are liable for the higher rate of income tax.

Mr Donohoe said extra tax coming in as a result of economic growth has gone on increased public expenditure and reducing the deficit.

“Look at where we are in the financial cycle. This time a decade ago we were in a financial bubble. Now we have a far more diversified economy with levels of debt that are far lower.”

He said the first quarter of this year had seen “a massive increase” in job creation and retention and that economy is “growing at full pace.”

In relation to how Brexit will affect financial planning, Mr Donohoe said the final decisions have not yet been made.

“We are facing a unique challenge,” he said.

The details of how a no-deal Brexit could affect the economy will be published in mid-June as part of the Summer Economic Statement, which will begin the process of laying out the last budget before there is a general election.

Mr Donohoe said the prospect of a no deal Brexit was a cause for concern and that he will present the Cabinet with the different scenarios “we might have to deal with if we find ourselves with a no-deal scenario”.

However, he said that the model for a no-deal scenario shows that the economy can still grow and that the jobs created can be kept. “But it will mean we will have to make even more careful decisions on day to day spending.”