Irish Ferries has asked the public to name its newest boat. Did they learn nothing from Boaty McBoatface? 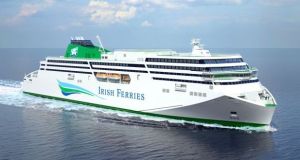 The new Irish Ferries ship, which cost €144m – a big boat that needs a big name – and the public is being asked to choose it

The Fast and the Ferryious?

It’s not easy to come up with a big name for a big boat but if you can successfully christen the new Irish Ferries vessel that is currently being assembled in a German boatyard at a cost of €144m, you could win yourself a life time of free travel on the water.

Irish Ferries has said its naming competition will run until early next month and it is accepting entries on its dedicated bigshipbigname.com website with the boat taking float next summer. With weeks to go before the end of the naming competition more than 30,000 votes had been cast although a spokesman for Irish Ferries was unable to say if any one name had pulled ahead.

Presumably it is readying itself for a flood of ridiculous suggestions and hoping to avoid a repeat of the Boaty McBoatface scandal which engulfed our friends across the water last year.

Last spring, the Natural Environment Research Council in the UK innocently offered the public the chance to chose the name of its new polar expedition ship. More than 100,000 votes were cast with Boaty McBoatface winning by a massive margin.

But then the NERC went and spoiled it all by naming their new boat after the broadcaster and naturalist David Attenborough instead, although it did name one of its remotely operated sub-sea vehicles Boaty by way of compensation.

It was small comfort.

But the Boaty McBoatface shenanigans are not the only thing which should have informed the Irish Ferries folk.

There was the time Greenpeace launched a campaign to given a humpback whale in the South Pacific a name so as to make it harder for Japanese fishermen to take it out of the water. The poor whale ended up being called Mr Splashy Pants.

And it was even worse for the marketing execs at the US soft drinks giant Mountain Dew who thought it might be a wheeze to get the public’s help in naming a new apple drink. The plan was taken over the message board 4chan after which “Hitler did nothing wrong” rocketed to the top of the naming chart.

The company was forced to pull the campaign at that point.

Justin Bieber’s people also learned about the perils of encouraging online engagement when it asked Beliebers to suggest a place for a concert. The Beliebers might have responded but they were drowned out by non-Beliebers who ensured that North Korea topped the poll.

And pity poor Limp Bizkit singer Fred Durst and Austin, Texas. The city launched an online campaign to rename its Solid Waste Services Department and The Fred Durst Society of the Humanities and Arts ended up the clear winner.

It ended up being called Austin Resource Recovery.