Planes don’t give you colds, and other air travel myths busted 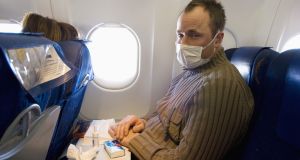 1. If someone sneezes on a plane everyone’s getting a cold

Unless they sneeze into your face or onto your meal you should be grand. Even though you’re flying miles high in the sky in a small and well sealed metal tube for hours on end the air you breath is surprisingly clean. Filtration systems on modern planes are now so advanced that they kill over 99 per cent of airborne microbes. Truth be told, you are considerably more at risk of catching something horrendous in your office or on a bus.

Possibly, but they are by no means the grossest part of a plane. That’s probably the tray that you eat off, which is crawling with germs. Back in 2007 a study was carried out on US planes, and it showed that 60 per cent of tray tables had traces of MRSA. Seat pockets and whatever you might find in them are also best avoided. While we are talking about toilets, rest assured that although they are powered by loud, sucky vacuumy things, no matter what happens you’ll not get stuck on one.

According to one of the more persistent rumours about air travel, the more you visit an airline’s website and look up a particular fare, the higher the prices go. Conspiracy theorists blame cookies – small pieces of computer code that track us as we surf the web. The theory is that cookies alert airline that we are really interested in a particular fare and willing to pay more, so the airline jacks up the prices. So if you clear your cookies the prices fall – or so the theory goes. It is not true, or at least no one –- not websites like skyscanner or tech geeks who specialise in airfare spotting – has ever been able to prove it.

It depends on the destination but a good rule of thumb is to book your flights for short haul six weeks before you are due to fly. Earlier than that and you get the airlines starting prices before they feel the need to discount to sell more seats. Book later than that and you pay the last-minute panicked traveller premium. For long-haul flights book around 18 weeks before you go.

They do happen, but the chances of you getting one are slim, and it doesn’t matter if you rock up wearing your confirmation suit, or pretend to be a loved-up just-married couple, or feign an illness. Unless you have paid a lot of cash for your ticket and unless the plane is completely overbooked you are not getting out of the cheap seats.

6. Doors can be opened in the sky

Even the Incredible Hulk would struggle to open a plane’s doors mid-flight. There is no way a mere mortal is able to do it.

7. Storms are a big risk

While thunderbolts and lightning are very, very frightening, they are not going to make your plane crash. Even if a plane is hit by lightning, you will be grand. Storms are an expected eventuality and, while pilots tend to skirt them if possible, they can also fly through them. And turbulence is not dangerous either – though It can be terrifying. As a pilot once told us, turbulence is entirely natural and a baby’s instinct when flying through it is to fall asleep. We could learn from them.

8. Mobile phones can bring a plane down

The reason you are told to turn off your phone is not because your mindless scrolling through Twitter is any risk to the plane but because occasionally the crackle of mobile phone signals can interfere with headsets used in the cockpit annoying the crew. And even that doesn’t happen all that frequently any more – which is why more and more airlines are relaxing the rules.

9. Drinking on a plane gets your drunker

The reason many people think they get drunker on a flight than they do on the ground is because they drink more and they drink faster. It absolutely nothing to do with atmospheric conditions. Having said that, people can feel lightheaded in the air, and that does feels a bit like drunkenness, but they are not the same thing.