A hybrid weekend bag, Boombox with heft and a mini-pump 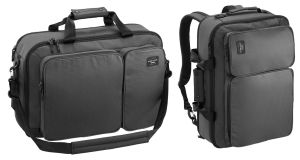 With Ryanair declaring it is going to reintroduce more restrictive carry-on allowances, perhaps it’s time to rethink the whole luggage paradigm. One packing philosophy which has its (admittedly less chronologically-challenged) advocates is only to pack what you can carry: no wheeling. Eagle Creek’s Converge weekend bag is the sort of hybrid to make this work. Part rucksack with padded back straps, part soft shell case with lots of handles, it’s also got a shoulder strap. Plenty of compartments and pockets to organise everything, and if you get off on that sort of thing go the whole hog with a set of Converge packing organisers. Then check out Janice Holly Booth. €200, see eaglecreek.eu

Not quite the scale of some of the monster ghetto-blasters (probably an entirely non-PC expression these days) that the 1980s saw, JBL’s new so-called Boombox is still a decent heft. Weighing in at 5kg, it’s built to last, promising 24 hours play time from a full charge and IPX7 rated waterproofing. It can take a ducking. That big battery lets it charge other devices too, while the tunes are streamed over Bluetooth. And with a pair of woofers and tweeters, and passive bass radiators, it’ll kick up a bit of a ruckus to boot. €499, see jbl.com

Founded in Milan and now based out of Indiana, Silca has been ahead of the peloton for a century when it comes to pumps. Its Tattico shows off its technical chops with a pressure sensor – sealed, shock resistant and waterproofed – built into this mini-pump which can be paired with an iGauge app on your smartphone for super-accurate inflation. It measures PSI, BAR or KG/CM2, with the hose and check valve secreted away in the inner-tube. $150, see silca.cc

Just four countries remain on green list: Where do we stand with travel now?
2

Thinking of take-out tonight? Here's the pick of Dublin's restaurant meals to go
3