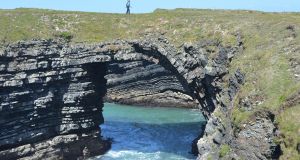 Last week we asked readers for a tourist attraction they had visited which had left them underwhelmed and unimpressed. We received hundreds of responses – hardly surprising as people, generally speaking, like to give out – particularly on social media platforms.

But what would happen, we wondered, if we flipped the question and asked people to identify the one place – anywhere in the world that met - and then completely surpassed – all their expectations, a place so magical that it would live forever in their hearts?

Would people be slow in coming forward?

The short answer to that question is No. In the days after we asked that question on Twitter we received in excess of 400 responses from people who wanted to sing the praises of destinations, some well known to everyone and some largely hidden from public view.

People identified places at home and on the other side of the world, both man-made and made by the unseen hand of nature.

If we were asked to pick the most impressive locations we have ever visited or tourist attractions we have ever seen we would struggle to choose between the Great Wall of China, the Grand Canyon, the Eiffel Tower, Manhattan and the Victoria Falls.

Our readers seemed similarly conflicted, and as the days passed and the answers poured in, the pendulum swung between six or seven locations – including all of the aforementioned.

Some of the destinations chosen were not so well known. “Baalbek in the Bekaa valley of Lebanon. The Temple of Bacchus specifically was mind-blowing. Lebanon as a whole stole my heart,” said Monica Heck.

Lived in lots of places inc Shanghai & Swiss Alps but each time I go to #gurteenbeach #Connemara it just takes my breath away.Stunning. pic.twitter.com/p2cX4k2BJB

Grand Canyon, just incredible - friend said shut your eyes, led me to the edge and then WOW - no words! What a way to see it! TY Kathy Casey

Being 5,000m up at Lake 69 in Huaraz, Peru or in Colca Canyon, Arequipa, Peru seeing the wingspan of condors flying overhead pic.twitter.com/cV4bbra1Do

“The Tongariro Crossing in New Zealand, a place that made me feel deeply connected and moved. Might have been the altitude though,” was Paul Kelders’ offering.

“Palmyra in Syria, ” said Warren Swords. “[It] was just stunning. Could explore wherever you wanted.”

“The Forbidden Palace in Beijing, so much bigger than I thought, you could spend a day there and not see it all,” said Oscar Finn.

“Jealous of all the places mentioned here that I haven’t visited ... yet! But bloody hell NYC was so exciting ... felt like I was on a film set,” was Natalie McCambridge’s view.

Irish locations got mentions too. “Titanic in Belfast. How museums/exhibits should be organised,” suggested Peter Wheen. Three or four people gave the thumbs up to the Giant’s Causeway, a spot which came in for a bit of flack last week.

“Loop Head, lighthouse and the rest of it. Plus Carrigaholt Dolphin Trip – seeing all those dolphins in the Shannon estuary,” said Fiona O’Connor.

“Thought about this some more,” responded Shivaun Quinlivan. “There are stretches of the Wild Atlantic Way that are breathtakingly beautiful – Sneem to Waterville being just one.”

The Sagrada Familia, the Vatican, Angkor Wat and Machu Picchu were all mention multiple times by our well-travelled readers but, there were five locations that finished ahead of the pack.

Tied for fourth place were a natural phenomena just off the Kerry coast and a park – if that doesn’t do it an injustice – in the US. Skellig Michael and Yosemite National Park were hugely popular among readers but they finished just behind Sydney and its wavey opera house in third and Manhattan which finished in second place.

But the runaway winner was the Grand Canyon.

“Just incredible,” said Deirdre Kelly. “Friend said shut your eyes, led me to the edge and then WOW - no words! What a way to see it.”

“Grand Canyon from the Flagstaff side – defines the word awesome,” was Anthony Tobin’s view, while Dan Kavanagh said he “literally had a deep intake of breath when I first stood on its edge”.