A Walk for the Weekend: JFK Arboretum

For nearly half a century, the JFK Arboretum near New Ross has been of Ireland’s great scenic walks 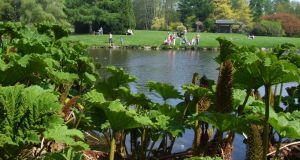 What makes the JFK Arboretum so attractive is that Sliabh Coiltair (270m) has been incorporated into the overall design. A road has been built to the summit and there is a car park on top, so you can avoid the 3km walk if you are not so inclined. As a stand-alone hill in a lowland area, Sliabh Coiltair punches well above its height when it comes to the panorama it offers

To the south lies the mouth of Waterford Harbour, while to the east the magnificent structure on the new bridge over the Suir points towards the clearly visible Comeragh Mountains. Below, the river Barrow flows in a great meander downstream from New Ross. To the north, the Blackstairs Mountains dominate the Wexford lowlands, and away to the east stretch the great arable lands of the “sunny southeast”.

The summit itself has a historical significance: during the 1798 Rebellion, it was here that Bagnal Harvey resigned his command and a detachment of rebels set out to attack gunboats on the river Barrow.

A quick descent brought me down to the gates of the arboretum. I was embarrassed to discover that it was opened by President Éamon de Valera in 1968 but had only recently come to my attention. Over the years it has been added to and it now covers a site of 252 hectares.

The sheer size could explain why, even though the car park was filling up as I started out on my exploration, I only met six other people on my chosen route. Well, I didn’t exactly choose a route, but rather headed off on a wander, which I find is the best way to enjoy this type of woodland.

A series of wide interlocking paths link the areas of most interest, but there are also narrow woodland trails that I like to explore, knowing that they will eventually emerge on to one of the main pathways.

I came out by a plot of slow-growing conifers. I am not a fan of conifers, but I must say I liked this plot a lot. They were well spaced, and because I was able to look down on them they did not generate the gloomy atmosphere of their large cousins.

The plants are laid out in family groups, so when a particular group are in flower, the effect is stunning – as in late spring when the 500 species of rhododendron come to life.

There are so many plant types, 4,500 in all, that it would do your head in if you tried to identify everything you came across. I was content just to admire the splendid positioning of trees and shrubs of different colours and shapes, which created a succession of delightful prospects. The planting around the lake was particularly entrancing.

Like anyone who has ever visited an arboretum, I left with a plan to come back in a different season, knowing that a whole new series of delights will await me.