‘Without the concussions, I wouldn’t have been the rugby player I very nearly became’

Ross O’Carroll-Kelly: Being fired as godfather is making him teary – so is the breakfast beer 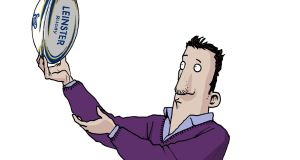 Lauren is calling in to see Sorcha this morning. I literally haven’t laid eyes on the girl since Honor’s dog bit her son, Ross jnr, and I point-black refused to have him put down. Yeah, no, I also ended up resigning as the kid’s godfather on account of him being a bit of a wuss?

Sorcha goes, “Ross, maybe you should go out?”

I’m like, “Out? I’m not going out. France are playing the States in the rugby.”

“You could watch it somewhere else? What about Kiely’s?”

“Are you trying to make me cry here?”

“Sorry, I keep forgetting it’s gone. Well, somewhere else then?”

“I’m watching it here, Sorcha – on the 80-incher. End of conversation.”

“I repeat – it’s France against the States, Sorcha. She’s not driving me out of my own house. I’m staying where I am.”

And that’s what ends up happening? So, like, 20 minutes later, I’m sitting there, watching the match when I hear a ring on the front door, then all this chatter outside in the hallway. Sorcha’s going, “Oh my God, look at you – you’re teeny-tiny!” and other insincere things that girls say to each other.

I’m sitting there for 15 minutes when there’s, like, a knock on the living room door. I freeze. I really am terrified of Lauren. I’m like, “Yeah?” in a really soft voice.

Yeah, no, he talks like the kid from Jerry Maguire. It’s kind of cute, in fairness.

He goes, “My mom thaid that that no one ith thoo call me Roth jnr anymore. I’m my own perthon and I shouldn’t be defined in relation to anyone elth – ethpecially you.”

“Yeth. Anyway, I jutht wanted to thalk thoo you thoo make sure there ith no awkwardneth between uth.”

God, he’s a great kid – if you could getting over the whole zero-interest-in-rugby thing.

I’m there, “Hey, there’s no awkwardness from my POV. I mean, you do understand, don’t you, why I resigned as your godfather?”

“Ith fine. My mom never wanthed you to be my godfather in the firtht playth.”

“But there’th no need for you thoo feel bad, Roth, becauth I have a new godfather now!”

A new godfather? For some reason, that ends up hitting me right in the feels.

I’m there, “Who is it? Not that I’m jealous. The only reason I’m asking you is to make conversation.”

I’m like, “Fionn?” and I can hear the jealousy in my own voice.

He’s there, “Yeth, we have loadth in common. I like thienth.”

“Are you trying to say science?”

“Well, if it’s books you’re into, then Fionn’s definitely your man. He’s never without one in his hand. It’s not normal.”

“Yeah, no, just by how, I don’t know, quickly everyone seems to have moved on?”

And I’m there, “No, I’m not crying,” even though I actually am? Drinking alcohol first thing in the morning always makes me teary. I’m very much like my mother in that regord.

He goes, “Fionn hath promithed to bring me to the Young Thientitht of the Year Ekthibition!”

“He altho gave me a book about thino thorth.”

“Dinosaurs? It sounds likes he’s going all out to impress you.”

“We both love thino thorth.”

“I’m just making the point that this is how it usually storts off. There’ll be presents. There’ll be trips here, there and everywhere. But I’m guaranteeing you this – it won’t last.”

“Yeah, no, all these early morning matches are taking their toll on me, that’s all.”

There’s, like, silence for a few seconds, then I go, “We did have some good times, didn’t we?”

“Yes! Do you remember the time I tried to teach you the basics of the great game and the ball hit you in the head?”

“Kid, I’d had six concussions by the time I was your age. Without the concussions, I wouldn’t have been the rugby player I very nearly became.”

I wipe my eyes. We’re both quiet again for a bit. We’re both staring at the TV screen, then I hear him go, “Ith thith rugby?”

Jesus, he doesn’t even recognise it. If I’d been any kind of godfather, I’d have applied to the courts for custody.

I’m like, “Yeah, this is the game that your old dear doesn’t want you watching.”

He’s just, like, staring at the screen literally mesmerised?

He goes, “I like the way they have thoo throw the ball backwardth to go forwardth.”

I’m there, “That’s one of the first things I loved about it!”

“Whoa!” he suddenly shouts. “Thid you thee that thackle?”

“Yeah, no,” I go, “that was how your old man used to tackle. Christian was one of the hordest tacklers in the schools game back in the late 1990s.”

It’s at that exact moment that Lauren steps into the living room, going, “Ross? Where are you, my little dorling?”

I take it for granted that she’s talking to him.

He’s there, “I’m in here, watching the rugby with Uncle Roth!”

She goes, “Rugby?” like he’s said, I don’t know, Islamic State executions. “Ross, come out of that room right now!”

“You do not like it! What have I told you would happen if you watched that game?”

“Exactly. Except he’s not your uncle. He’s nothing to you anymore.”

Little Ross jnr smiles at me on his way out the door. He goes, “Bye, Roth.”