Reports on the Duchess closing her own car door have hailed her as humble, while also slamming her for flouting royal protocol 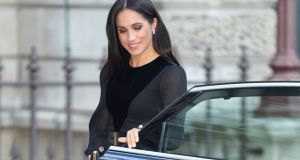 In journalistic circles, silly season is supposed to be well and truly over. So in normal circumstances, the idea of the media reporting about a woman closing a car door behind herself can only ever be attributed to some sort of weird matrix glitch.

But then you realise that it’s Meghan Markle that people are feverishly talking about, and talk of normal circumstances effectively flies out the window.

With the gravitas usually reserved for significant world events, a small and inconsequential gesture sparked (I can’t quite believe I’m writing it, either) a world debate and was hailed as “changing the monarchy”. Certainly, stories in royal folklore abound about Prince Charles having his toothpaste squeezed onto his brush by a valet (though he has since debunked them). Yet who knew that royalty were held to such a bizarrely exalted standard that a princess who “takes the time” to shut a car door would be considered such an anomaly? Every day is indeed a school day.

That Markle has closed her own car door during a public appearance this week is seen as a (heavy air quotes here) “shocking” and “bold” move. Many, in both traditional and social media, praised her humble and down to earth attitude (whatever crises are going on in your life, know this. If you are a vehicle owner, the Twitter commentariat will likely think of you as “down to earth” and “humble”). Another news outlet went one further, noting that in her early years as an actress, she was once forced to clamber through the boot of her own banger because she was too poor to fix the car’s broken door.

Thank God reporters don’t ever get to see her brush her own teeth or use the loo; the commentary on which hardly bears thinking about.

Earlier today, another report marvelled at how Markle and her husband Prince Harry went to Amsterdam on a “secret” trip and drank! And went out! With people! Like other normal people!

It’s precisely this ordinariness that has sparked some kind of “does not compute” scenario with the media in their ongoing tango with the new Duchess. Yet to anyone who thought that the monarchy needed a dust-down and a shake-up, the Markle Sparkle is the gift that keeps on giving.

I’ve closed my own car door 4 times already today, and even drove my own car 😲 Can I get some appreciation please?! #DuchessOfSussex #MeghanMarkle pic.twitter.com/QhLc42yAw5

God knows, some absolute humdingers have landed on the desks of newspaper giants. Imagine the groans of ecstasy when a photo landed of a teenaged Markle, posing outside Buckingham Palace with a friend as a tourist. You can almost hear the high-fives dealt in news conferences when her motley crew of extended relatives – many of them money-grabbing opportunists only too happy to talk her down in public – loomed into view.

As for the glossy, fleshy stills from her many sex scenes in the TV show Suits: not even Wallis Simpson was this much of a tabloid gift.

It’s precisely this Hollywood provenance, coupled with her (vile anachronistic speak alert) “commoner” background, that have reporters and their readers singularly obsessed with the Markle Sparkle.

Whoever managed to capture the heart of spirited, likeable Harry was always going to be a figure of intrigue, yet the media appear adore the idea of this former Netflix actress and occasional activist as some kind of doe-eyed interloper; the classic fish out of water. It’s as though she is the spirited and guileless star of a bad 1980s comedy like King Ralph, and Lord knows they don’t come along into the Firm too often (look what happens when they do. Abdications and the like).

The media can’t get enough of Markle’s supposed gaffes and those occasional (albeit increasingly rare) flashes of a real life person behind the cut-glass veneer. If you believe the ongoing narrative, she is caught, Golightly-style, between her efforts to fit into The Firm without too much fuss, and the supposed constraints that royal protocol demands.

But the media are also trying to build another intriguing character: that of a glamorous and spirited feminist trying to bring down/push forward the British monarchy. You only need look at the virtual side-eye afforded her every single move. What she wears, what she says, how she says it. The fluctuating hemlines. The “modern” trouser suits (since nixed, reportedly, by the Queen herself).  The supposedly outré public displays of affection with her new husband. The designer outfits, the prices of which are often reported on in a somewhat accusing, snidey tone. The accent, slightly more crisp than before.

For better or worse, Markle has been caught between a deeply ingrained societal snobbery, and what can only be called a rabid chase for media clicks.

It’s always been this way, ever since Prince Harry took the unprecedented move of calling the media out in November 2016, mere months into the couple’s relationship.

“Some of this has been very public — the smear on the front page of a national newspaper; the racial undertones of comment pieces; and the outright sexism and racism of social media trolls and web article comments,” the statement read. How was that ever going to turn out well?

Newcomers into The Firm have always been subject to scrutiny, but rarely at this vertiginous, near-hysterical level. Harry’s sister-in-law, Kate Middleton - who also shock-horror has been caught closing car doors - became tabloid catnip for a while, yet whether by accident or wily design, her persona became so beige and non-descript as to save her from ongoing fascination.

There’s been the drip-drip of “candid” family photos, and the gradual whitewashing of anything outside of her role as royal wife and mother (the rollerskates, the Doors-To-Manual, Uncle Gary, all now lost in the sands of time). And if you’ve seen one Middleton ensemble – midi dress, nude court, nice jacket – you’ve seen them all.

Yet where Markle is concerned, we will soon be forced to be agog at how she eats/walks/talks/waves/puts a jacket on unprompted.

Perhaps the reason for all of this is even more pedestrian that we thought. In a media industry where clicks mean cash, a Meghan Markle story – any Meghan Markle story, including one as inane as this – is still a sure bet. Yet from a pedestal that high and wobbly, Markle probably has probably a lonely, and very petrifying, vantage point. Even worse, the only way can ever be down.