A walk on the wild side with National Geopgraphic's explorer 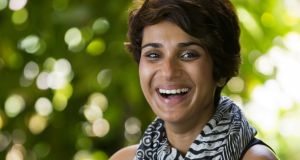 Asher Jay: the National Geographic explorer’s artworks and ad campaigns have focused on the destruction and violence that human beings visit on the natural world. Now she’s changing her mindset.

“National Geographic explorer” is quite a job description – but it doesn’t even begin to describe Asher Jay. She’s also a painter, sculptor and fashion designer whose work, whether in the form of advertising campaigns, films, prints or installations, has a single purpose: to raise awareness of biodiversity loss and speak out on behalf of wildlife conservation.

Born in India and resident in New York – when she’s not zooming to or from a diving expedition in polar waters or a birdwatching trip to northern Colombia or an anti-poaching mission on an African savannah – Jay is also blessed with a sense of humour. Here’s part of her own description of herself, from her website. “Scientific name: Asherus Jayus. Description: Mammalian and well groomed like its close relatives, the Great Apes. The Asher has golden brown curly hair that it wears in a short, asymmetrical cut. Tall, tan and attired in trendy ensembles, this untamable creature is nocturnal by choice and diurnal by coffee …”

When she answers the phone to The Irish Times Jay is on a couple of “rest” days in Montana – where, having completed her daily workout and imbibed her first coffee of the morning, she is ready to wax lyrical on the concept of “wildness”.

Jay’s philosophy of connection, or reconnection, is turned up to 11 in an online National Geographic video in which she recalls a revelatory night-time encounter in the Serengeti. She awoke with a jolt, aware that “something was pressing up against her head from outside the tent, sniffing”. It was a lion. Instead of giving in to terror, she slowed her breathing to match that of the animal outside.  “One minute I was prey – the next, I was with it,” she says. “I could feel the flow of my blood. It was just pure magic.”

But she insists that you don’t have to travel to the ends of the Earth to experience the sort of connection she felt with that African lion. “Because we’re part of nature and not separate from it, everything we do is part of nature too. If you look at skyscrapers in New York city, that landscape is an exact replica of the other organism that builds the tallest vertical structures: coral. It’s exactly like living in a giant coral reef. We do pretty much simulate the exact patterns observed in nature – we’ve just forgotten that that’s why we do it.

“The minute you realise that, it becomes much easier to live your everyday life because so much of you is already instinctively in connection to the world at large. You don’t have to fight to flow, because life is flowing constantly. Whether it’s the wind or the river or the ocean currents. All of it is in flow. We seem to have lost that simplicity of being, in all the doing that we do. If the solar system were to operate as humans do, there would need to be traffic lights – right?”

If you focus on a problem, you’re only going to create more of a problem

In the past, Jay’s artworks and ad campaigns have focused on the destruction and violence that human beings have visited, and continue to visit, on the natural world. But she, too, is changing her mindset. “If you focus on a problem, you’re only going to create more of a problem. I’d rather focus on the possibilities. My purpose right now is twofold. One is helping people find inner alignment. And two is helping people focus on what is positive, so that we can create more good in this world.”

There is plenty of good work being done in terms of species renewal and conservation, she says. Another good thing is National Geographic’s live show, Symphony for our World – which, after a sellout tour of the US, gets its European premiere at the Gaelic Grounds in Limerick on September 29th. This big-screen event pairs 130 years of big-screen National Geographic footage with an original symphony composed by Austin Fray and Andrew Christie of Bleeding Fingers Music, which produced the soundtracks for the BBC’s Blue Planet II as well as such films as The Hobbit. The music will be played live by the National Geographic Symphony Orchestra, led by the Irish composer Kenneth Rice and accompanied by the Limerick Chamber Choir.

If you were to give in to your inner critic, you might be tempted to suggest that such a stunning cornucopia of images and sounds will just lull audiences into the belief that, despite galloping climate change, out-of-control population increase and catastrophic biodiversity loss, our planet is in pretty good shape.

Jay, however, isn’t having any of it. Instead, she argues that the gig’s immersive combination of visual imagery and music is designed to give audiences a taste of precisely the sense of connection and flow she has been talking about. “When that swell happens, that intoxicating rise of energy within you happens, without you even having to ask for it,” she says. “That’s what it feels like to witness coral reefs, or to be out in the cloud forest. It explodes in every cell of your being.”

Sign us up. In fact, putting the phone down after a conversation with Asher Jay, I’m left to wonder whether it wouldn’t be possible to make her president of the US. Or maybe the world. Or, before we mess that up as well, the solar system? And it isn’t even lunchtime.