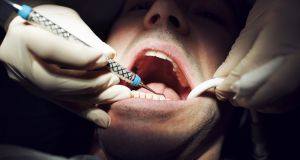 Root Canal Guy repeatedly cooed ‘relaxrelaxrelax’, usually when coming at me with an enormous needle or some other pointy instrument.

People often say – usually while wearing an evangelical smile – that you should always be open to new experiences.

For instance, last Saturday morning Daughter Number Four managed to puncture my painstakingly cultivated had-a-load-of-kids-I-know-it-all image by literally handing me a new experience: a small ball of her own poo.

How she managed to extract it from her nappy and make it perfectly spherical I will never know; nor will I ever penetrate the babyish thought process that led her to conclude that I would be pleased with this gift.

Yet she did present it to me with a smile and a there you go and I was momentarily delighted. I said thank you. I thought it was some discoloured Blu Tack. Until the smell hit me.

About an hour after this, I went for a root canal.

Another new experience for me, though not, it seemed, for everyone else. As soon as I mentioned I was going, I was drowning in advice; some felt it wasn’t worth it. Just get the tooth pulled. Others told me that it’s not a big deal. Just takes a while.

But the majority were keen to tell me just how bad their root canal had been and how mine would never match it in terms of awfulness. In effect they had been machine-gunned in the mouth, while I was complaining about a relatively minor procedure. Even though I wasn’t complaining as I hadn’t had the procedure yet.

Dentists are obviously aware of this bad press. Even before I met the Root Canal Guy, the staff were euphorically describing how great the Root Canal Guy was, and how he kept up with the latest research and how the entire procedure would not hurt at all.

I suspect that several of them might have been a little in love with the Root Canal Guy: who everyone referred at as Doctor Roberto. This did make him sound a little like a character from a telenovela. And when I finally met him in person, I must admit there was considerable smoulder.

Doctor Roberto wanted me to relax. I know this because he repeatedly cooed relaxrelaxrelax, usually when coming at me with an enormous needle or some other pointy instrument. Later on, he advised me to breathe or I might gag. Handy tip.

This was because he and the dental nurse had set up a side bet to see just how many pieces of equipment they could fit in my mouth. Or at least that’s what I assume was going on. I was too busy breathing and relaxing.

In any event, having finally unloaded all the tubes, part of a coat hanger and a stretched out condom from my mouth, Doctor Roberto explained that what was left of my tooth had collapsed anyway and that I’d have to come back a few weeks later to have a crown fitted. I nodded. I didn’t say much because my jaw was completely numb.

The whole experience wasn’t so bad. But it was one of the many episodes we have in life that don’t seem to add anything to it; part of the greyness that fills up the time between the exciting bits.

As I gazed up at Doctor Roberto’s dreamy eyes, I didn’t have an epiphany or see my existence in a new light. I didn’t learn anything. I wondered how long it was going to take as I had to get to Tesco later.

Though it did strike me that in future if Daughter Number Four hands me anything, I should put on gloves first. I suppose that was something.