‘Put butter on your daily bread. A headstone’s no good when you’re dead’ 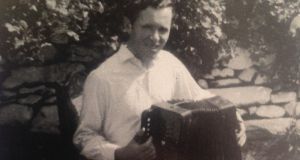 “Put butter on your daily bread, For a headstone’s no good when you’re dead,” was one of Dad’s favourite sayings with good reason, when thinking of some things he told me about growing up in 1930s’ Donegal.

They walked eight miles to school and back in their bare feet with dry bread and water. There was only one boiled egg a day to go round – the rest being sold – and the youngest child always got the egg. When his brother Brian started school, my dad lost the egg.

When they were nine, Dad remembered him and Brian getting their first lovely Woodbine off the neighbour, Charlie Wylie. Back then, doctors recommended taking up smoking to reduce stress.

Later, Dad would take the horse and cart to Killybegs market to buy herrings to sell to the neighbours. He also played the accordion at the dance halls with the Magpie Band, collecting the money afterwards.

A dance with the ladies was in order, even if the women’s armpits smelled of onions, as they sometimes did. At home, visitors called at night to play cards and music and to sing. A travelling musician went from house to house. My dad noticed that in the morning he used to wash his face in his own wee and that he had the loveliest skin.

Mary, my grandmother, visited the neighbours at night with only an oil lamp to light her way. One night she heard something moving near the road. Being very superstitious back then, she was sure it was a ghost. From that day forward, Mary never left the house alone at night again.

The brothers had to take the pledge at church, swearing off drink until they were 21. Still, there was home-made poteen to cure the flu. To great excitement came their first radio, everyone gathering round at 9pm each night for the news and ceilidh music.

When they were 20, they went off to work in Scotland. Arriving in Glasgow, Dad never forgot his first hot bath and the feeling of sinking away into the big feather bed. Every morning after, he always had two eggs and plenty of butter on his bread.

Why do people turn to alternative therapies?
9