The small, pathetic, petty events when it feels good to take the low road

Laura Kennedy: ‘The woman was so unjustly hostile that I did not want to be polite’ 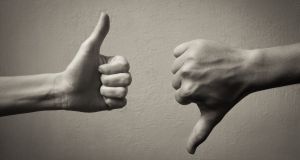 “Moments when, through an act of choice for which we are completely responsible, we take the low, weaselly road.”

Sometimes, events occur in our lives which can prompt a reassessment of the things we think we know about ourselves. You will no doubt be thinking of those big, changemaking events which send our lives in entirely new directions – the birth of a child, a new job, moving to a new country – or the tragic things, like the loss of someone we love.

I am not referring to those. I am talking about the small, pathetic things, those petty events – almost always our own fault in which we confront the gremlins of our own paltriness. The moments when, through an act of choice for which we are completely responsible, we take the low, weaselly road, and become less respectable to ourselves and others.

Such examples as I have witnessed include a man at a friend’s wedding who chose to become so drunk that while other guests were dancing to Rock the Boat, he thought it a good idea to simulate making love to the (already cut) wedding cake, which naturally was unable to proffer its consent.

The bride’s aunt, who had made the cake and was very proud of the fact, let out a shrill battle cry which silenced the room, before phoning the man’s mother (he was well into his 20s) to tell her what he had done, and to lament the cost of the dried fruit which had gone into the cake, which “no one in their right mind would want to eat now, Theresa”. I never saw the man again, and can only presume that the shame he felt on waking the next day caused him to evaporate into an alcoholic vapour and float away into the wind.

Hopefully that story will make the fact that I got into a disagreement with an elderly woman on a plane seem slightly less shameful, though it probably shouldn’t. I do not make a habit of ending up in confrontations on flights, or anywhere really. It had been a long day, and one peppered with stress. If that psychological theory of finite self-control which diminishes with each decision we make through the day is true (I have my doubts), then I had used up all of mine by the time I found myself in the middle seat, with my partner Jules, 6ft 4 and squished into the window seat on my left, and the lady in question on my right in the aisle seat.

There we sat on the flight to London, which had not yet moved, having learned instants before from totally disinterested Aer Lingus ground staff that our cat, who was making the move with us, was not in the hold of the plane as arranged, and was in fact lost.

Jules was incensed, and expressed this liberally to the stewardess. After a time, the plane began to move, and I switched my phone to airplane mode and went back to my book in an attempt to distract myself. At this point, the lady beside me, clearly annoyed by Jules’ behaviour but finding me, at 5ft tall and rather softer, a more convenient target, shouted with bizarre aggression “Did she (the stewardess) not tell you to turn off that phone? Do you not care about the safety of everyone else on board?”

My gremlins gnashed, and instead of politely explaining that it was okay to use my phone in airplane mode, and assuring her that I was not in fact “the most selfish person in the world”, who “wanted to kill us all”, I was abrupt. It was not that I had no willpower left for politeness, it was that the woman was so unjustly hostile that I did not want to be polite. After an irritable verbal exchange, there was a silence which I hoped would be the end of it.

Suddenly, Jules leaned forward from his window seat and addressed the woman, who was sitting between me and the aisle. “Just so you know…,” he said calmly and with a benign smile on his face, ‘I am going to go the bathroom one hundred times during this flight’. Knowing that he would never actually do such a thing, I stifled a small chuckle as the plane began to ascend. We took the low road to London.

How can I tell my husband it is over and I want a divorce?
2

The trained GP who can’t work in Ireland, despite the shortage
8